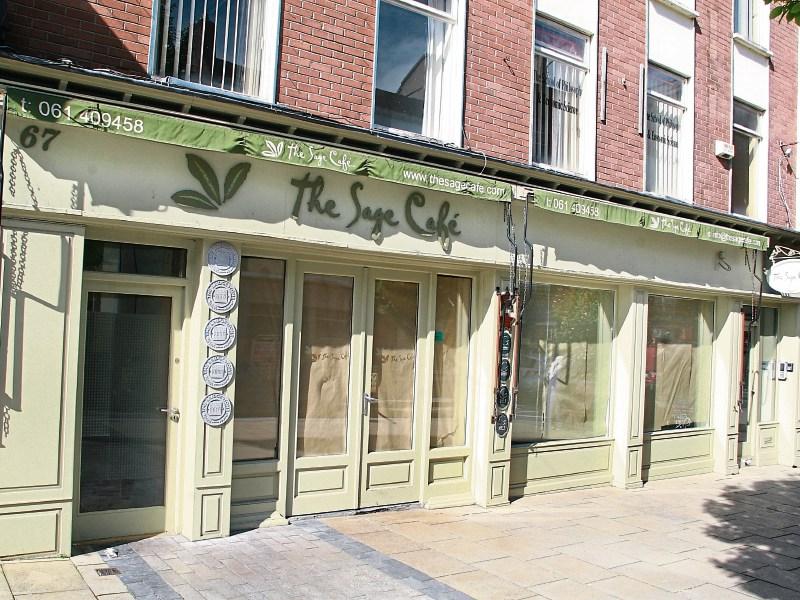 The Sage Cafe closed its doors for the final time after 11 years Picture: Adrian Butler

THE closure of Limerick's Sage Café over the course of last weekend was sad to see. The business has been a popular destination for those shopping or working in the city centre for over 11 years.

The announcement by the owners of Sage Café was met with comments suggesting that the retail scenario in the city centre is a cause for concern.

However, there was no suggestion by Mike and Siobhan Hogan, the owners of the business, that poor trading was a reason for their decision to close Sage. An official statement said the owners had decided to ‘pursue other avenues’.

It is never nice to see the city centre lose a valued and popular business. Recently we have also seen the closure of Chocolat restaurant on O’Connell Street.

We have seen the loss of Noel Andrews and Gasta on Thomas Street. In recent years, other indigenous businesses such as Eves and Wacky Shoes have closed their doors. The loss of Pamela Scott and Elvery Sports on Henry Street were also big losses.

Despite being a firm advocate for Limerick city centre I have had reason of late to visit the likes of the Childers Road Retail Park, Castletroy Shopping Centre, the Crescent and, more recently, the Kildare Village.

What is clear when looking at each of these out-of-town developments is the that they are thriving. Castletroy Shopping Centre is a real phoenix rising from the ashes of the recession.

That’s not to say that Limerick city centre hasn’t seen new businesses open. It has. I have it on good authority that we may see one or two big name openings in the city centre before the end of the year.

However, I do have my concerns in terms of our city centre retail mix.

We have an excellent offer in terms of cafes but some would argue this retail sector is saturated.

We are improving in terms of our food offer but I would argue some more high-end restaurants would now be a preferred addition.

When looking at out-of-town retail there is clearly a desire by certain big brands to have a certain square footage available.

These bigger retailers will also consider footfall as a major factor when it comes to choosing a destination. Limerick struggles in both these areas.

As job creation comes on stream with the completion of the International Gardens project along other key developments we should see the city centre given a footfall boost.

As the economy finally emerges from a long period of recession we should be cautiously optimistic about the future of Limerick city centre as a retail destination.

However, we must also remember the famous doughnut effect.

With the likes of Mungret earmarked for development we run the risk of seeing out-of-town retail thriving to the detriment of the city centre once again.

All is not doom and gloom but we must take note that city centre retail continues to struggle against out-of-town offerings. This needs a planned, targeted retail strategy.

Therefore, any new developments that come on stream should carefully consider what retail offering they can contain and strategically target those big-name brands who may now be ready to finally give our city centre a chance.

In recent months I have written a lot about the issue of transport in Limerick particularly as we enter a new phase of economic development.

It was therefore very refreshing to see the addition of Irish carsharing company GoCar to the city centre.

GoCar offers pay-as-you-go driving with hourly rates on a return to base scheme. Members can book cars online or via the app, access the vehicle using their phone or GoCard, enter a pin to release the keys and they’re off.

Should this project be successful we could see more city centre workers ditch the car in favour of public transport whilst still having access to a car should one be required.

Bronze for city in Tidy Towns

I was delighted to see Limerick City Tidy Towns receive a bronze medal at the National Tidy Towns 2017 Awards.

Since forming in 2012 this group has dedicated many man hours towards the upkeep of our city centre and the award is well deserved.

Forming a new Tidy Towns Group to specifically cover Limerick city centre was the brainchild of Helen O’Donnell at the Limerick Local Heroes Ideas Summit in 2012. Since then many new volunteers and supporters have joined, and the Tidy Towns effort now includes input from groups such as the South Limerick City Residents Association, Westfields Wetlands and others.

Helen, chairperson of Limerick City Tidy Towns, said this week: “On behalf of the committee and all our volunteers, we were delighted to accept this award today as recognition for all that we have achieved since we first formed back in 2012. We are thrilled to receive this bronze model on behalf of the city, and especially all our dedicated volunteers who have worked tirelessly over the past six years”.