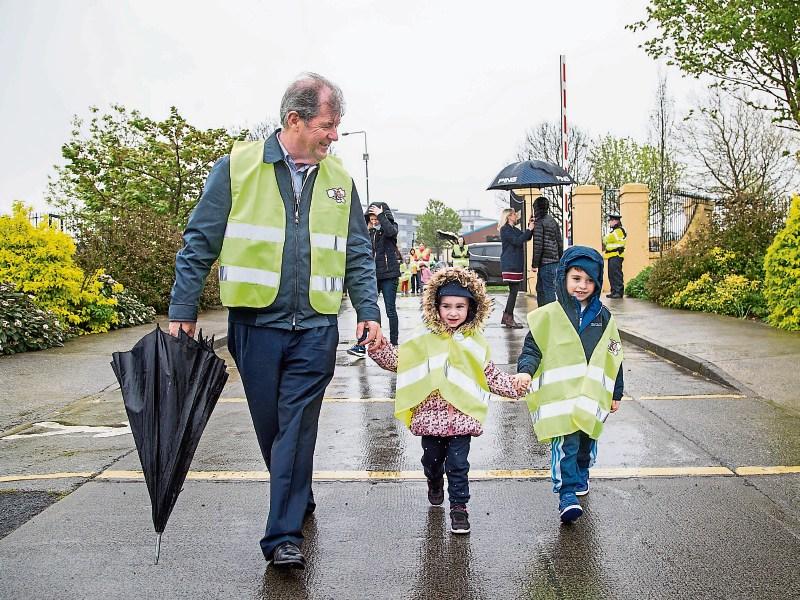 JP McManus with Sophie Glasheen and Robbie Woodland at Team Limerick Clean-Up . In the wake of another underwhelming IBAL performance, the Council must stop hiding behind community initiatives

We all need to work together to help keep Limerick clean. People must take responsibility for their own rubbish and not dump it indiscriminately expecting others to clean it up.

That’s according to Limerick City and County Council who issued a statement on Monday following a report issued by the Irish Businesses Against Litter organisation which saw Limerick slip down the litter rankings.

As was reported in Monday’s Limerick Leader, the city has fallen five places in IBAL anti-litter rankings and now has the dubious title of a ‘moderately littered’ city. Limerick currently sits 37th out 40 in Ireland.

Reading the IBAL report on the city one could be forgiven for thinking that Limerick city was a dump. There are parts of the report I would take issue with but we cannot ignore the fact that our ranking from IBAL’s perspective is concerning.

In the statement issued by the local authority it notes that initiatives supported by Limerick City and County Council such as Team Limerick Clean-Up, Limerick Going for Gold and Tidy Towns Competition as movements that “are also encouraging people to be more civic minded, and help stop littering and clean up their areas”.

It also notes that the Council has budgeted €5.3 million on litter management and street cleaning for 2017.

Reading the statement, I was struck by a sense that it was defensive in tone and used a number of voluntary initiatives as a shield to hide behind.

The Team Limerick Clean-up is a JP McManus Charitable Foundation initiative which has received widespread acclaim over recent years. Every Good Friday, for the past few years, thousands of citizens across the city and county have teamed up to show pride in their place.

The Going for Gold initiative incorporates a grant and competition that is open to local groups that carry out environmental work. Despite being a Council-led initiative it is again funded by the McManus Foundation.

Limerick Tidy Towns is a voluntary group of people who dedicate Tuesday evenings and Sunday mornings to carry out clean-ups of the city.

They give a monthly award to businesses who make an effort in terms of cleanliness and their recent campaign to clean up Limerick’s basements has seen some success.

The Council statement noted that: “There are approximately 150 litter bins in the city centre which are serviced daily and the streets swept by six mechanical sweepers. Outdoor staff also tend to litter picking and street and footpath sweeping”. All very good, so why is the city perceived as dirty?

Just over a month ago I noticed one of our city’s bins overturned in the Milk Market area. It was clearly a victim of revellers from the night before. The following day the bin was removed and has yet to be replaced.

The local authority recently received a swanky new street cleaning gadget. This, again, was a gift from JP.

The limited number of street cleaners employed by the local authority in the city do their best with resources they have. I’m sure reports such as this week’s IBAL don’t give them a morale boost.

The Parks Department in the local authority deserve great credit for the work they do. They clearly have a pride in the job that they do and seem to be resourced well.

On paper things are good. We have a vibrant community clean-up ethos. We have beautiful parks, maintained well. We have a local philanthropist willing to resource initiatives to inspire local pride of place.

There is a missing link, however. One of the key roles of the local authority, using ratepayers’ money, is keeping the city clean.

The IBAL report, whatever your views on it, clearly doesn’t see Limerick as a leader in terms of cleanliness. It is the role of the local authority to address this.

Team Limerick Clean-up, Tidy Towns or the Going for Gold initiative should be the icing on the cake in terms of how Limerick presents itself.

Instead, what seems to be happening is that the local authority is treating such voluntary projects as something to hide behind. There needs to be acknowledgement that their city centre environment team needs boosting.

A stroll through the campus at the University of Limerick will show you how a large space can and should be maintained. A good case study should one be needed.

We talk a lot about job creation and building a new Limerick these days. Perhaps now is a perfect time to invest a little bit more in how we present the city to those who will consider investing here. Our communities are doing their bit. The ball, now, is in the local authority’s court.