River key to the future vision of Limerick city 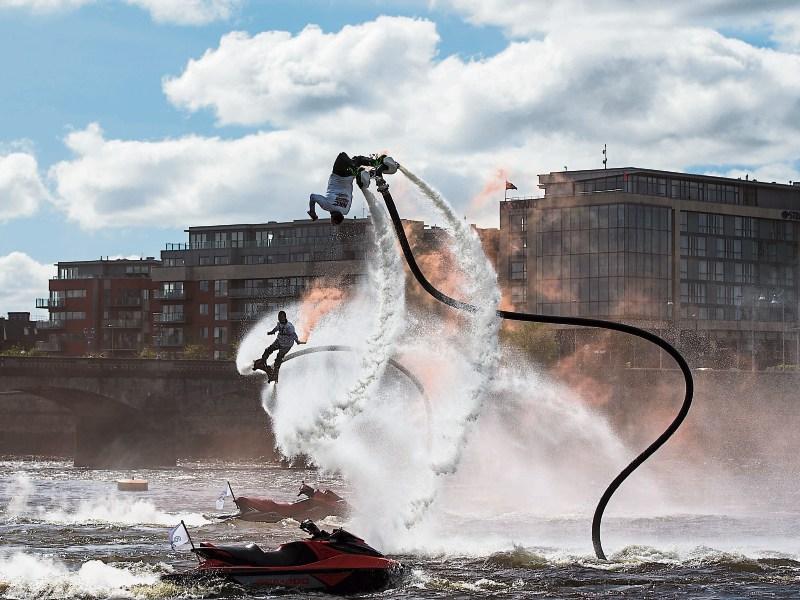 Some of the action at Riverfest this year. Limerick has come a long way in five years, hopefully we can become a truly world class riverside city Picture: Cathal Noonan/True Media

DURING Riverfest weekend this year I took an opportunity to take part in a group Kayaking trip from UL boat club into the heart of the city centre.

It was a simple, relaxing afternoon. We passed under bridges and were swept over falls. We felt we were part of the River Shannon for a few hours and had the opportunity to explore Limerick from a totally new vantage point.

Last night I came across an old podcast I had worked on during my time with the Limerick Local Heroes initiative. The podcast featured an interview with Rosemary Ryan who was then working with Limerick Sports Partnership. The interview focused on a new Bridges of Limerick walk that Rosemary was developing with various community groups around the city.

Part of the interview discussed how our river vista needed to be explored more by the people of Limerick. This was back in 2012. The new Riverside boardwalk had yet to be completed. Limerick was marketing itself as a riverside city but we had some way to go to live up to such a status.

Five years on and things have changed. We have seen the emergence of Get West and Nevsail who are both offering regular opportunities to explore Limerick city from a riverside perspective.

King John’s Castle has seen a revamp over that time. New businesses such as House, the Curragower and Jack Monday’s have opened on the riverside. The Hunt Museum has opened its riverside gardens to the public. The city centre to UL walk and cycleway has been completed.

We have seen the introduction of a weekly street food event taking place on the boardwalk. Most recently Terry Wogan has taken pride of place in the new-look Poor Man’s Kilkee.

Then last weekend we saw a bunch of intrepid individuals don their wetsuits and delve into the Shannon’s waters. Organised by the Curragower Boat Club the event was the latest civic activity aimed at embracing Limerick’s riverside location.

Listening back to that podcast was a reminder of how far Limerick has come. Words that were being used about our riverside at the time were ‘neglected’, ‘empty’, ‘underutilised’ and ‘dangerous’.

We must remember that back in 2012 we were only beginning our journey of economic development. The zeitgeist was one that tended to speak negatively about our home town.

I tried to project my mind five years into the future and made an effort to imagine where Limerick might have come to by 2022. By that stage, all going well, we should have seen the creation of Kirkland Development’s riverside project that should add over 700 new riverside workers along with over 40 new apartments.

It might be around that time that we see the demolition of Sarsfield House and the commencement of a new-look Arthur’s Quay Park. With some negotiation, the Wild Atlantic Way might take in Limerick and the estuary out to Foynes (a quick look at Derry, Lough Foyle and a similar estuary gives us a strong precedent).

With any luck, we might have seen something happen to the ghastly former Dunnes site on Sarsfield Bridge. The Cleeves site might then be at the forefront of people’s minds. The old gas yard site on the Dock Road will have been cleaned up and ripe for development.

In the grand scheme of things, five years is a very short period of time. What has happened in Limerick over the past five years could be considered remarkable.

We are now being spoken of as a city on the up.

Newspaper reports on Limerick are now mostly positive. Jobs are being created. Key sites are being developed. Our citizens are engaging with the powers that be to demand excellence in delivery.

As all of Limerick’s future plans are being developed and delivered over the next five years we should never lose sight of the fact that the city’s heart is the River Shannon.

If we continue to develop our city with the Shannon in mind we could arrive at the year 2022 with a Riverside city that really does rival some of the best in the world.

The revamp of Limerick.ie which was launched earlier this year didn’t happen overnight. Behind the scenes a huge amount of work went into taking a tired but functional website and transforming it into something groundbreaking.

Limerick.ie is now seen as one of the most advanced local authority digital platforms in the country.

There are thousands of pages to explore in what is the biggest single online portal for any council in Ireland.

At the time of the launch the local authority’s marketing team were rightfully credited for the hard work it took to deliver the new look Limerick.ie.

I was delighted to see the project receiving even greater recognition last week with the news that the site has been named as one of the world’s Top 25 best tourism websites for 2017.

The list has been compiled by US-based Skift, the largest industry intelligence platform providing media, insights and marketing to key sectors of travel across the globe.

Limerick.ie is the only website in Ireland to be chosen for the 2017 list and is one of only four in Europe.

This is no small achievement for a city of our size and clearly shows that the Limerick product can be up there with some of the international greats.