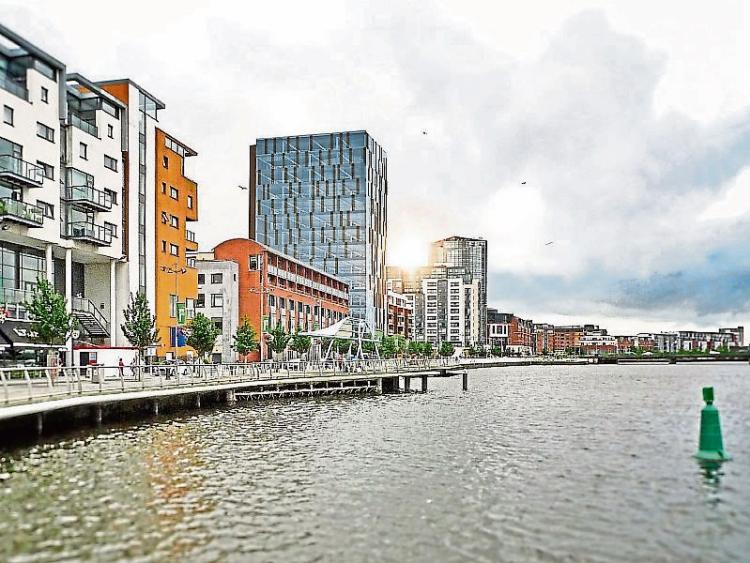 Permission for Kirkland Developments’ riverside project - an artist’s impression of which is pictured above - is welcome, but doesn't solve the paucity of quality living space in the city centre

The project which is expected to be on site in early 2018 will create 150,000 square feet of office space allowing for the accommodation of approximately 600 jobs within the development.

Around the corner on Henry Street workers are on site as the Gardens International development moves towards completion. This project has the potential to accommodate up to 700 jobs.

The word on the street is that plans for the much-discussed former Opera site on Patrick Street will be submitted in the not too distant future.

How many jobs this site will accommodate is yet to be revealed but figures bandied about in the past suggest we might be looking at up to 3,000 jobs.

Ignoring the Opera development (this will take a little longer to complete) let’s now focus on both the International Gardens and Kirkland’s project.

Kirkland’s proposals will also see 45 luxury apartments within a towering 15-storey high building with restaurant and 108 car spaces. There is no residential accommodation provided for within International Gardens.

Does any see the elephant in the room? The recent debate around creating a liveable Limerick has resulted in many valuable contributions in relation to the future of our city. Most commentators have proffered great ideas as to how we make our city people-friendly.

Could it be that we are forgetting a key issue? Come 6pm in Limerick our city sees an exodus of single vehicle cars as workers or shoppers head for the leafy green suburban lands.

All going well we should see the city quays project and Gardens International reaching completion within a few months of each other. Some 1,300 new city centre jobs. How wonderful will that be? Let’s now consider the 45 new apartments provided on the city quays. If each apartment was to become home to an average of two residents then we are adding 90 people to the urban population.

A quick look at planning applications shows us that there are zero other significant developments coming down the track in terms of the provision of urban living accommodation.

The math therefore tells us that in approximately two and a half years Limerick city will need to provide homes to a minimum of 1,210 employees.

Could it be that another leafy suburban model - this time on the lands around Mungret - are being earmarked to cater for such an influx of potential city centre workers?

In other words, are we doing exactly what we have done in the past – creating another out of town development where hundreds of residents commute in and out by car?

I hope I am wrong in this basic reading of what is happening in Limerick an d the planners and the local authority have a secret residential trump card up their sleeves.

If I am right, however, we are repeating the past. We are not putting enough focus on the provision of quality, well managed residential additions in our urban centre. The end result runs the risk of completing the final segment of the bitter doughnut for which Limerick has become so well known over recent decades.

Huge congratulations are due to Kathleen Turner, course director and lecturer on the MA course in Community Music at the World Irish Academy, who has been awarded the Jerome Hynes Fellowship as part of the Clore Leadership Programme award.

She is the only Irish recipient of an award this year. Some 25 Clore Fellowships have been awarded for 2017/18 to exceptional individuals from across the visual and performing arts, heritage, museums, literature, cultural policy, film and broadcasting fields.

Turner is well known on the Limerick cultural scene. Prior to her appointment to the World Irish Academy in 2015, she worked as community engagement manager with the Irish Chamber Orchestra and as a community musician. She is on the committee for non-mainstream music education funded by the Department of Education and Skills, and is a volunteer with Sing Out With Strings community music programme.

Founded in 2003, the Clore Leadership Programme is a pioneering initiative to develop and strengthen leadership across cultural and creative sectors in the UK and beyond.

The programme awards its flagship Clore Fellowships, and runs a choice of programmes tailored to the leadership needs of arts professionals.

Darren Henley, Arts Council England, said: “Clore Fellowships are an excellent opportunity to identify and grow talented people, helping us to develop the best possible leadership across the arts and culture world. It’s really encouraging to see that many of this year’s Fellows have a deep commitment to their communities. I wish each of the newly announced Fellows every success this year and in the future.”