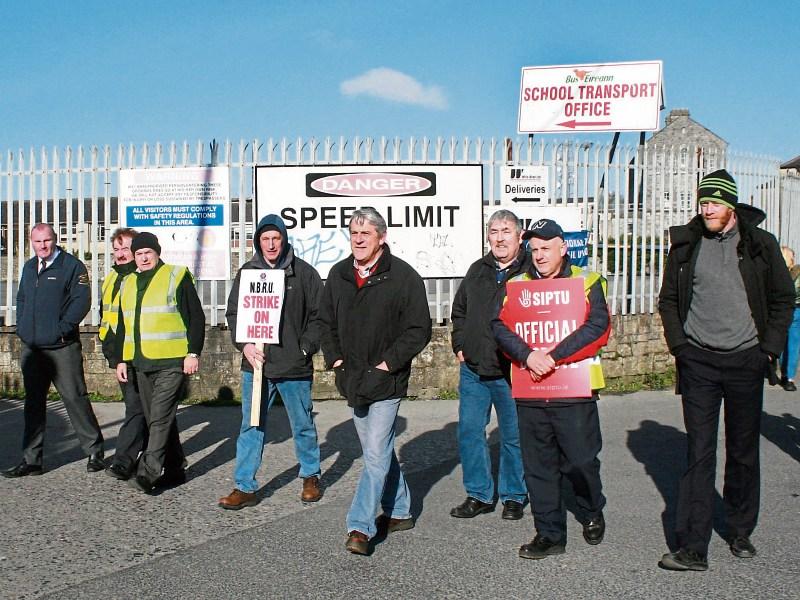 Some of the bus drivers picketing the Bus Eireann depot on Sexton Street. Their action has highlighted how important the bus service is to the general public

ONE of the perks of living and working in Limerick city is the fact that getting around is so simple. Despite being one of Ireland’s major cities our core city centre is relatively small.

I don’t drive. I never have had to. Most of my life has been spent living in urban centres or, for a period, living at sea.

When living in London one of the things that gave me the most pleasure, oddly enough, was travelling on the London transport system. There is something immensely satisfying about standing on a train platform or under a bus shelter and knowing that the service will be on time.

An Oyster Card – the London equivalent of a Leap card- is not cheap. At present the average price of a monthly card is £160. The fact is you cannot live without an Oyster Card in a city like London. You factor the cost into your monthly budget.

When I moved back to Limerick I was initially based near Annacotty. Having grown up in the area I was blown away upon my return to see how the place had exploded in terms of population and development.

When I was a kid my house was surrounded by fields - the next housing development one would come across was Monaleen Heights.

Look at this part of the city today – Castletroy College, Castletroy Shopping Centre, a Gaelscoil, Glenside, Bloomfield, Thornfields, Carrigeen and the development of Annacotty village.

The landscape of where I grew up as a child has fundamentally changed. What hasn’t changed a jot is what is offered in terms of public transport from Bus Eireann.

Living in the Newtown part of Castletroy demands a 20-minute walk to catch a Bus Eireann service.

Try that on a wet winter morning.

A few weeks ago I found myself in a rare situation where I was required to attend a meeting outside the city in Dooradoyle.

My appointment was for 10am. I arrived at the bus stop outside Debenhams at 9.10am and was delighted to see those neon signs telling me the next three buses to Dooradoyle were due at 9.20am, 9.35am and 9.45am.

I was now late. I wandered around the corner, jumped in a cab and spent eight times the price of a bus to get to my meeting on time.

When I visit home in Castletroy on occasions one thing always strikes me. Every home has at least two cars sitting outside the front door.

Most mornings the majority of these cars are occupied by one person. These cars clog up our roads resulting in frustrating tailbacks. Then comes the cost of parking.

Surely it would make more sense to use public transport, particularly during the working week? Ah, but therein lies the rub.

Our public transport service doesn’t properly service the parts of our city that have become major residential hubs over the past 20 years.

There is a certain demographic who look at me as if I am mad when I tell them I use public transport. They have been reared to see such a service as below their status. They don’t fathom ‘sharing’ their journey with another member of the Limerick public.

This isn’t just a Limerick thing. Outside of Dublin there is a real snobbery when it comes to how we perceive public transport. This needs to be nipped in the bud and fast.

I have heard the argument that Bus Eireann is a necessary service and one that should not necessarily be profit making.

All well and good but when a public service is making losses of €9m per year and not providing an acceptable service then it needs to be addressed.

The strike by Bus Eireann workers is highlighting just how important such a service is to so many of our population.

It is highlighting also how backward our country is in terms of providing a service that is both reliable and one that services those areas where most of us live.

Let’s look at the Castletroy/Annacotty example once again. I haven’t the population stats for that part of the city but imagine these three changes:

It adds a separate Castletroy/Annacotty route that gives most residents of this area access to a regular bus no more than a five minute walk from their home.

Finally, a dedicated bus lane is provided right into the heart of the city centre.

Could this ‘radical’ reassessment of just one of our city’s bus route result in greater customer demand? Could it make getting around our city more enjoyable?

Could it help remove the perception that buses are for the lesser beings of society? Could it result in time in the creation of an urban centre where public transport flows in a way comparable to that akin to London (albeit on a smaller scale)?

I think it’s worth considering.