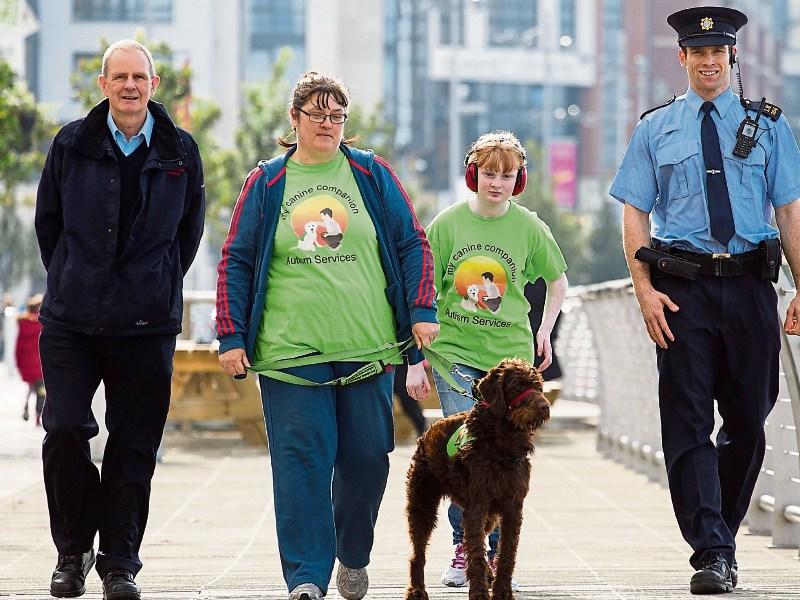 Mike Walsh, Denise and Michaela Deegan and Garda Dave O'Connell at the 2014 launch of an initiative to tackle dog waste in the city. Sadly it hasn't really had much of an impact Picture: Alan Place

ON a walk in Limerick city with my pooch last Sunday I conducted a little survey. The survey was simple – count the number of dog poos left on the streets of Limerick city centre.

The route? From Pennywell up to the station, through the People’s Park, down Mallow St and then down O’Connell St and then finishing for coffee on Thomas St.

The result? Eighty-nine dog poos left festering on a small section of our city streets. Note that this route did not take in our new boardwalk and the O’Callaghan/Clancy Strand areas, both of which have recognised dog poo problems.

What irks me is that, after posting on social media, most of the comments I received were in some way blaming Limerick Council for the city’s dog poo epidemic.

The fact is this – if you own a dog and your dog does his business on our streets then it is your responsibility to pick it up and bin it.

Aside from being ignorant, irresponsible and selfish behaviour, the leaving of dog dirt on our streets is a danger in terms of public health.

Research shows that a single gram of dog poo can contain 23 million fecal coliform bacteria, which are known to cause cramps, diarrhea, intestinal illness, and serious kidney disorders in humans.

Not the sort of stuff we need sitting outside our front door.

The rules under Section 22 of the Litter Pollution Act 1997 state that it is an offence to allow a dog under your control to foul a public place. This means the owner or person in charge of the dog is required to remove dog faeces and dispose of them in a suitable, sanitary manner.

You can complain to the District Court under the litter laws against an owner or someone in charge of a dog who allows that dog to foul public places and who fails to act responsibly.

Under the Act, a dog owner who fails to clean up after their animal faces an on-the-spot fine of €150, with a maximum fine of €3,000 for those convicted.

However, enforcing this law can be virtually impossible.

Across Ireland and further afield we have repeatedly seen initiatives that have attempted to deal with the scourge of dog fouling in cities.

In 2015 Cork City Council announced the introduction of audible dog poo alarms in certain parts of the city. These audio messaging devices would send out subtle ‘reminders’ at regular intervals in an attempt to curb the scourge of dog poo.

In 2016 Madrid announced a plan to force dog owners in two districts to clean up after their pets. Those caught not doing so must either spend a few days as substitute street cleaners or face a €1,700 fine.

In both France and in Malaga a plan was devised to simply collect all the pet dogs' DNA in a database. Once that is set up then officials can take samples of any excrement left lying around the area and quickly trace it back to the offending mutts and their owners.

And most interestingly, Brunete, a suburb of Madrid, boxed up dog faeces and mailed it to owners.

For two weeks, volunteers spied on dog walkers, approached those who didn’t scoop and asked the name of the pooch — which, because most were registered with the city, was usually enough information to determine the owner’s address.

Some of these solutions might be considered Draconian by some. However, for whatever reason, there is clearly an ignorance, an apathy and a carelessness in certain dog owners in Limerick. I, for one, would happily stand by the introduction of a name-and-shame approach.

It is not just the people of Limerick who notice the problem. I have met many visitors to Limerick from the United States, all of whom have remarked on how much of an issue dog poo is on our public walkways.

Limerick people by their nature are extremely passionate people when it comes to their city. We will fight tooth and nail to protect our reputation. This passion does seem to be at odds with how good we are at presenting our urban space.

It won’t be long until Limerick once again makes headlines across the country when we embark on the third Team Limerick Clean-up, that fantastic initiative led by Paul O’Connell and JP McManus.

Let’s try and make 2017 the year where tackling the scourge of dog poo finally makes it to the top of the agenda.