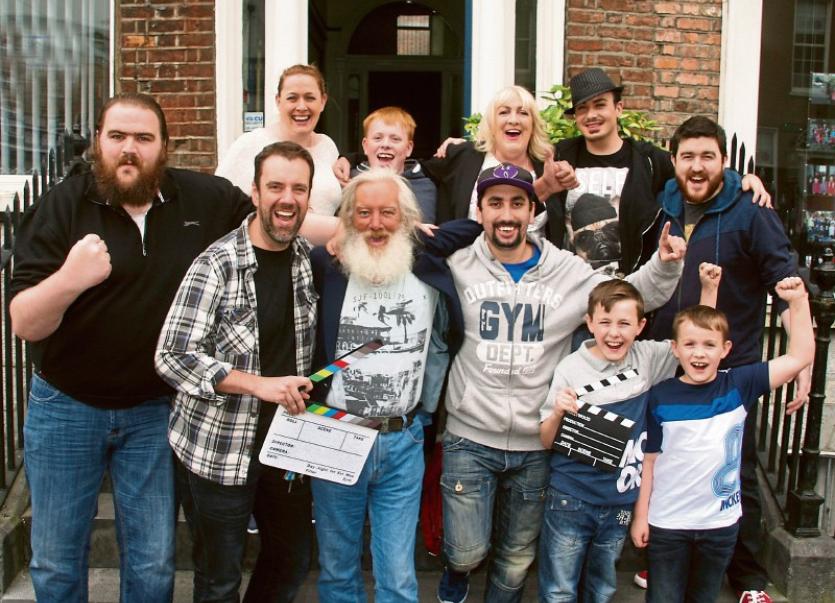 Jason Reddan, front in the hat, with his filmmaking team, celebrates his win Picture: Adrian Butler

MEETING Jason Reddan is like encountering a hurricane of creativity. He is a rapper, an accomplished skateboarder, a footballer who had trials for UK clubs, a poet, but most of all he is a storyteller.

This three-minute film, produced, written and filmed in Limerick, saw off over 1200 entries from around the globe and is arguably the most successful piece of film-making seen in the city for years.

Jason Reddan, or Jay Red as he is more affectionately known locally, was born and raised in Kileely and spent most of his childhood in the Moyross area of the city.

From an early age it was soccer that captured his imagination. He played with Distillery Football Club and his talent was recognised by some leading football clubs across the water.

Jason notes that some of the best storytellers and some of the most creative people he knows come from parts of Limerick that many have ignored.

“I believe that winning the title of European Capital of Culture for Limerick would be a massive boost for the city.

“If I was to make one suggestion it would be to maximise the involvement of communities like the ones I came from originally.

The total prize value for his success in the My Rode Short Film Competition is approximately €42,000.

This includes a range of filmmaking equipment as well as a €10,000 trip to New York where Jay will attend a month-long workshop at New York Film School.

In essence Jay has won a production company which will be based in Limerick.

“Limerick to me is the most underdog city in the whole of Ireland,” Jason says.

“Coming from where I came from I have always been aware of the huge social class structure that exists in the city. I believe we are a city that is fighting its way to the top.

“I think that is where true creativity comes from. When you are forced to put a lot of yourself on the line to achieve something, there is a raw passion to it.

“I like to think that is something I mirror in my own work. We have limited time on this planet.

“What we do during that time is a true reflection of who you are. I don’t believe that I won this award. I believe that Limerick won it.”

As we part company I can’t help but feel that this is a guy we will hear much more of. His energy, enthusiasm and go-get-it approach is matched by a deep philosophical and empathetic mindset.

Reddan’s filmmaking ability has been rewarded through this week’s award. This talent along with his noble personal traits, and his ability to overcome great challenges in his life surely puts him up there as one of those to watch in Limerick in the future.

Our garden of delight at the Hunt Museum

It was super to see the gardens of the Hunt Museum officially opening to the public this week.

The opening of the Hunt Museum Gardens to greater public access is part of a key objective to create new and deeper connections between the museum and the Limerick community and the many annual visitors to Limerick city.

This week’s announcement, in collaboration with Limerick City and County Council, will help the museum keep pace with economic, cultural and social developments in the city.

It is part of a desire to provide an even stronger programme of educational and cultural activities and do more to encourage new and repeat audiences.

The project will initially involve the opening of the gates to the currently railed off garden along with new signage to create a new public walkway from Rutland Street, through the gardens, over the Sylvester O’Halloran Bridge and through to Potato Market into Limerick’s historic medieval city.

The gardens of the Hunt have been a natural asset for many years.

The gardens are located in what was the front of the historic Custom House.

Perhaps this great asset has been underused for some time but this new development is set to create another valuable and picturesque public amenity in Limerick city centre.

It was wonderful to see the buzz in our city centre for the visit of the European Capital of Culture jury. If we could bottle the energy and togetherness witnessed on Tuesday we would have a city to rival all others.

Whatever the result on Friday Limerick has come together under the spirit of belonging to showcase our city at its best once again. This is a huge achievement in itself. We must remember moments like yesterday as we plan for the future.

Great credit is due to the organising team behind the Limerick 2020 bid and all the hundreds of volunteers who came out to show their pride yesterday.

Win or lose we did our city proud and that will stand to us in the years to come.

Sums up how I felt yesterday #Limerick2020 pic.twitter.com/sZpwN8HfZN