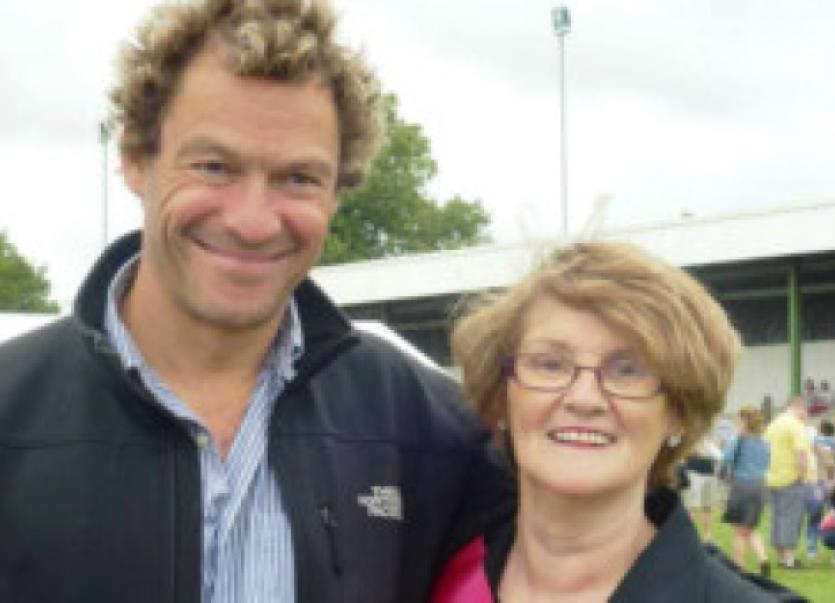 Go, Dominic, go. Actor and TV star, Dominic West, fresh from training with none other than Prince Harry, put on his running shoes in Glin last Sunday, in a bid to win the Dads’ Race.

Go, Dominic, go. Actor and TV star, Dominic West, fresh from training with none other than Prince Harry, put on his running shoes in Glin last Sunday, in a bid to win the Dads’ Race.

But local man, Hugh Dunne beat him to the winning line, leaving Dominic in second place.

Not to worry though. Dominic has until November to really get in shape if he wants to win an even bigger race – the race for the South Pole where he is hoping to beat Prince Harry into second place.

And to prepare for their 208-mile Arctic challenge, Dominic and Prince Harry have been training in Iceland where they tackled the country’s second largest glacier on skis while pulling heavy sleds.

Somewhat disap-pointingly, however, Dominic’s training partner was nowhere to be seen on Sunday when the Royal Prince could have taken on any number of Glin challenges such as the wheelbarrow race or sheaf-tossing or acting as a judge in the bonny baby competition.

And while there, Dominic’s wife, Catherine Fitzgerald of Glin Castle, could have filled him in on the family connections. The Fitzgeralds of Glin Castle are related back through the centuries to the Earls of Desmond.

In the late 1500s, Garrett Fitzgerald, the 14th Earl of Desmond married Eleanor Butler of Ormond, and their third daughter, Katherine married her cousin, Maurice Roche, Viscount Fermoy. Many centuries later, the late Princess Diana was a descendant of this union.

But hey, that’s all history and meanwhile, Dominic, the star of The Wire, Burton and Taylor and most recently of the film Pride, had a job to do on Sunday, presenting the prizes for the various races and competitions and posing with the winners.

Dominic has also set himself another local challenge, the annual Estuary Swim, which takes place at the end of this month. He has been spotted swimming daily under the expert guidance of Marie Geoghegan, in the rather chilly waters of the Shannon, although, according to some sources, he has been mixed up with another well-known name. “A Chippendale was spotted togging off down at the pier,” is the story going the rounds in Glin.

Dominic West signed up to the Walking with the Wounded South Pole Allied Challenge earlier this year and he will attempt to win the race with his team of Commonwealth soldiers. Prince Harry will lead the Glenfiddich team of wounded servicemen while a third team from the US is also expected to take part.

Meanwhile, however, John Anthony Culhane, chairman of Glin Development Association was delighted with the success of Sunday’s family fun day. “We had a fantastic day. The weather was good to us and that was half of it.”

And he congratulated the organising committee, saying it was brilliant to see young, vibrant members of the community getting involved.

One of the highlights of the weekend festival was unveiling of a sculpture commemorating Glin’s historic fishing industry. Artist Pat O’Loughlin performed the ceremony along with Cathaoirleach of Limerick County Council, John Sheahan.

The sculpture was commissioned by Glin Development Association and is located in the town park which has been refurbished with new landscaping and planting.