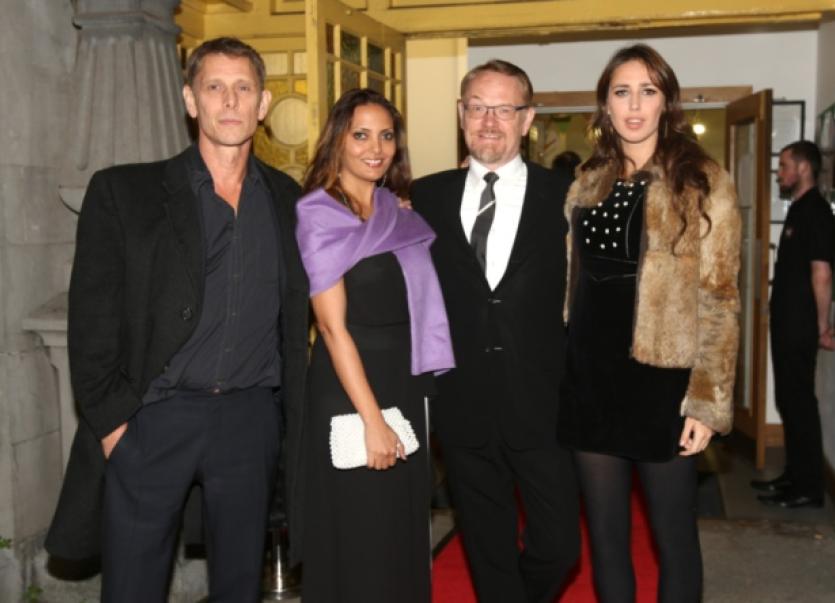 THE presence of Richard Harris’ sons Jared and Jamie in Limerick has firmly established the credibility of a film festival held in their father’s name last weekend.

THE presence of Richard Harris’ sons Jared and Jamie in Limerick has firmly established the credibility of a film festival held in their father’s name last weekend.

Mad Men star Jared flew in from South Africa and the set of Sean Penn’s latest film especially to attend the second staging of the Richard Harris Film Festival and spent the weekend attending events, mingling with guests and waxing lyrical about the event, in person and on television, as did brother Jamie, a veteran of roles in Rise of the Planet of the Apes and The Prestige.

Speaking to the Limerick Leader, Jared said he was “delighted” to be attending the film festival.

“Absolutely, I was sorry I couldn’t make it last year, I was stuck on a set – it almost happened this time but they shot me out, we jumped on a plane last night and came over from South Africa,” he said, of the journey that took the actor and glamorous wife Allegra through four countries over 24 hours and three planes in order to attend.

Asked what it meant to Jared, star of movies such as Sherlock Holmes, Pompeii and Lincoln, to have a festival in his father’s honour in Limerick, he said: “You constantly hear his voice in your ear all the time, you know what I mean?

“He liked things that were sort of – he had a wicked sense of humour, I think secretly he would be very happy and proud about it, but he would probably pass it off and be embarrassed, ‘don’t make a fuss’. But I think he would love it.

“And it is important as well, it is important for Limerick in the sense that there is an obvious connection that you can make there, and it is an opportunity to advance film makers from this part of the country and the culture of the city.”

The film star arrived at 69 O’Connell Street last Friday with brother Jamie, Allegra and Richard’s grand daughter Ella, who famously persuaded the legendary actor to take the part of Dumbledore in Harry Potter.

A screening of The Field - which Jared noted that his father had to audition for - was an appropriate opening event for the festival, even if it was clashing with the Munster match.

Noel Pearson, producer of The Field, was also in attendance, as was Transformers star Jack Reynor, receiving a ‘breakout’ award on the night.

“I was very fond of him, he was great,” said Pearson of Harris. “He was colourful, difficult, and you could have the biggest row in the world, he’d call you up and forget it.

“He was a one-off and that is all you can say about him - they don’t make them like him any more.”

Speaking of his father’s influence on his career, Jared Harris said he “would be a fool not to” be impacted by him.

“One of the things I remember he told me was that careers are about momentum, so maintain momentum,” said the actor, who has at least three blockbusters on the slate for next year. We would sit around the table at dinner time and discuss performances that he had seen and he would act out Olivier’s Titus Andronicus or something like that – it was good fun.”

Rob Gill, chairman of the festival, said the Harris’ sons presence “gave a big boost to the profile of the festival”, a year after third son Damian attended the event.

“That is what we are trying to do, as we are a start up festival, only in our second year, it is very important that we build our credibility and we have proven that we can attract people like Jared, Jamie and Jack Reynor and it is a great indication that the festival has a future and will go from strength to strength,” he said.

“They were very accessible and Jared gave a lot of time to the young film makers and the fact that he was able to interact is a great boon to them, not only to the festival.”

The festival, which celebrates the Irish film making Diaspora abroad as its theme, had a link-up with the Newport Beach Film Festival this year and one of the shortlisted films will screen at the LA event as a result.

The Harris family have firmly established a connection with the festival that guarantees their involvement in it into the future.

“Yes, we have a sort of commitment for a couple of years and they will see where they are after that,” said Jared.

“It is in its infancy, but I am excited about it, it is growing each year.”