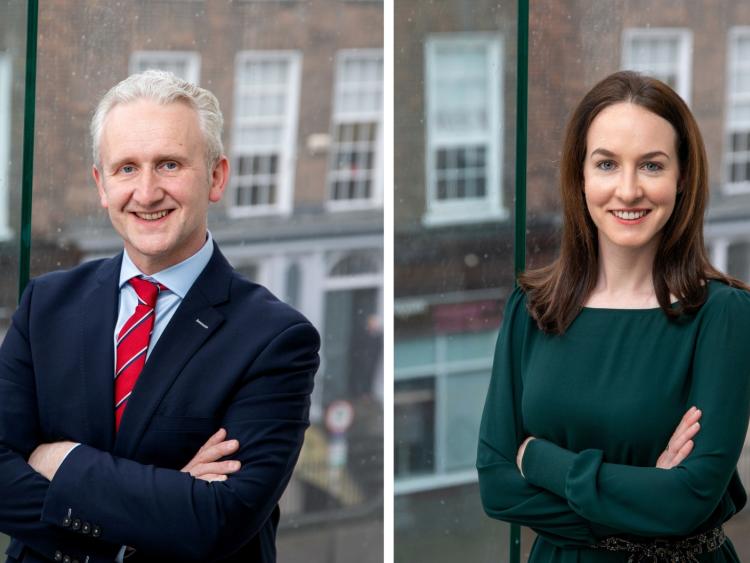 Donal Hanrahan and Gemma Harte are to lead BDO's recruitment division in Limerick.

BDO has announced the appointment of Associate Directors Donal Hanrahan and Gemma Harte to lead its recruitment division in Limerick.

The company, one of the region’s leading specialised recruiters,  says challenges with onboarding new employees and a reluctance to increase headcount has restricted hiring in accounting and finance teams.

While 2020 saw a significant slowdown in recruitment, there was a very high 'fill rate' for companies who did recruit.

Donal Hanrahan comes to the leadership role with over 20 years’ experience of recruiting within both finance and non-finance areas.  He has worked with a broad range of clients including multi-nationals, indigenous companies and semi-state organisations.

“After year on year growth in recruitment generally and not least in finance and accounting recruiting, where we have a particular speciality, there was no great surprise to see Irishjobs.ie Q4 2020 report showing that there was a 23% reduction in recruitment year-on-year across the board but accounting and finance was down by 39%, though that was slightly higher than our own experience of a 35% reduction," said Mr Hanrahan.

“There are three key reasons for this. One is that the turnover of staff on finance and accounting teams was lower than in 2019. But bigger factors were that onboarding of new employees has been much more challenging, while finance departments in larger publicly quoted organisations, who would have a regular requirement for positions to be filled, did not increase headcount numbers for the most part," he added.

Gemma Harte has been working with BDO for eight years and in that time has been instrumental in establishing the contract/temporary recruitment Team. She manages the provision of recruitment services across finance, HR and support staff professionals.

Commenting following her appointment, she said: “Privately owned companies, both domestic and multi-national, who were not listed on any stock exchange, recruited more than publicly quoted companies. They also typically engage the services of specialist recruitment providers such as ourselves. As a result, while the number of vacancies we were working on was lower, the % ‘fill-rate’ for those vacancies increased dramatically. That was the good news for these companies as they got what they were looking for."