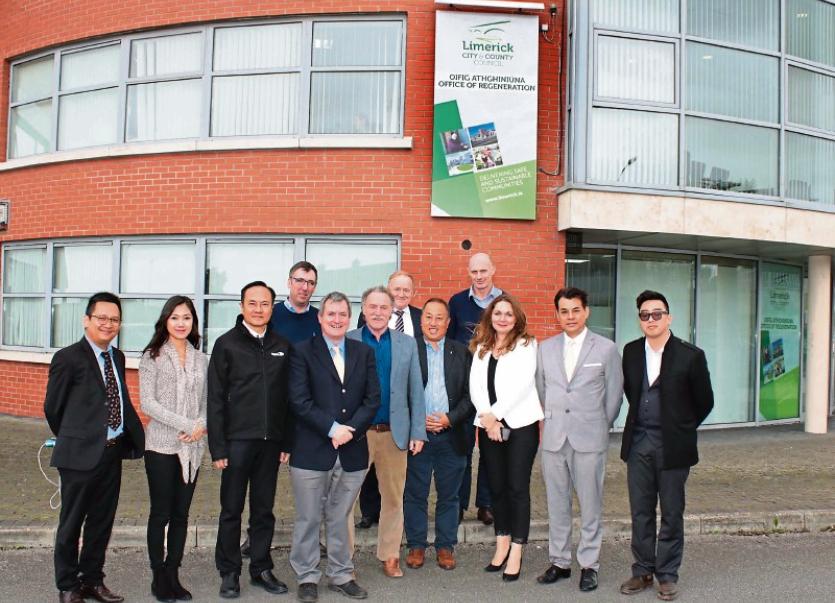 The delegation from Hong Kong, pictured with Senator Kieran O’Donnell and Ray O’Halloran, outside the Limerick Regeneration offices in Moyross | PICTURE: Michael Cowhey

LIMERICK could be set for a jobs bonanza with a Chinese investment company eyeing up opportunities in the city.

One of the main areas to benefit from the interest could be Moyross, with the Hong Kong-based company Ireina seeking to take space in the City Build training centre in the estate.

The Limerick Leader understands the investment company already has a number of firms lined up to create manufacturing and assembly jobs in the area.

In a separate boost, 100 jobs have been created at a new call-centre in Roches Street, with HCL technologies taking over the former Eircom building.

The company operates customer services for its client, Eir, and took on its first tranche of staff this Monday.

And the general manager of General Motors in Limerick, John Gleeson, revealed his firm has just recruited 25 new intern workers at its Dooradoyle offices.

He made the comments at the launch of Regional Skills Mid-West, a new initiative aimed at providing apprenticeship work.

Since it was built more than 40 years ago, Moyross has not had any major industry.

But all that could be about to change, with Vic Mak, the chairman and chief executive of Ireina saying the firm’s plans will lead to up to 30 jobs initially.

And there are high hopes this number will grow in what is an employment blackspot.

The news has been hailed as “very positive”, by local Fianna Fail TD Niall Collins, who met the group, and is his party’s spokesperson on enterprise.

Senator Kieran O’Donnell also met the delegation and added: “This is something that can provide a big social dividend.

The team from Hong Kong also met representatives of the IDA, Enterprise Ireland, and the local authority.

Mr Mak said Ireina is planning to invest millions of euro here. It’s envisaged flat-packed products from China will be brought over to Limerick to be assembled here for the Irish and European markets.

The  firm is marketing it as an opportunity for a Chinese company to have a presence in Western Europe.

Ray O’Halloran, the company’s representative in Ireland, said: “Ireina can see that this investment can be the catalyst for Moyross to expand into the future. They have certainly seen that in the manner in which regeneration has met them, treated them, and afforded them the possibility to invest.”

Mr O’Halloran said the firm is starting at a low number of roles “to create a much bigger job creation vehicle in the future.”

Senator O’Donnell said: “These projects will have a social and employment aspect in the regeneration areas. That’s something to be welcomed. Discussions are ongoing between council and the investors in terms of employment and amenities. I’d hope this is in place as quickly as possible. Jobs are the key, and what we are looking at here is a range of jobs in the low skill sector,​ which is something I am very conscious we have to look at.”

Mr Collins added: "They are open to education, health, infrastructure and all sorts of projects. They appear willing to invest in the region. They’ve done a lot of homework on the region. They know about our strong foreign direct investment footprint. The fund appears interested in investing in deficits which are there in accommodation and other pieces of infrastructure.”