Limerickman proposes and marries in Sierra Leone despite Ebola fears 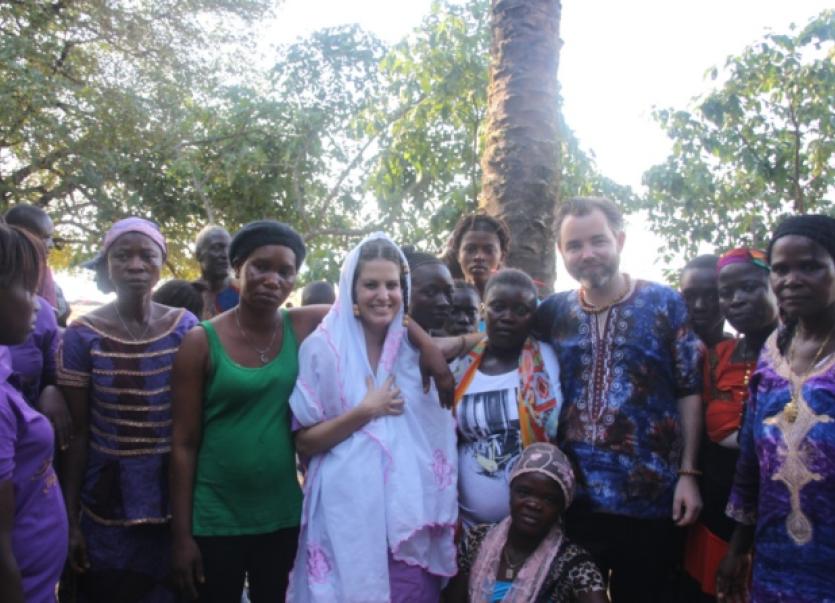 Johnny Murnane and his wife Carine Hejazi who got married in Sierra Leone, just days after his surprise proposal

IN EBOLA-ravaged Sierra Leone, Limerick native Johnny Murnane recently set out to run his second marathon - after donating one of his kidneys to his younger brother.

And inspite of the travel warnings which remain in place, it was also the destination where he surprised his girlfriend with a proposal of marriage, followed by their wedding just a few days later - which he had been planning months in advance.

In a stark departure to the traditional Irish wedding, Johnny, 38, got down on one knee the day after the exhaustive marathon to propose to his Swiss girlfriend Carine Hejazi, 34, whom he met while working in New York some 10 years ago.

“I ran the marathon on the Saturday, proposed on the Sunday and we got married on the beach on the Wednesday,” Johnny, from Shannonbanks, Corbally, told the Limerick Leader.

“My girlfriend didn’t know anything about it beforehand. I had everything planned in advance, right down to designing the ring beforehand for a few months. I think she understood then why I had been a bit stressed leading up to the trip,” he explained.

He and Carine, who was a bit “overwhelmed” at first but was “terribly excited”, married in a poor fishing village on the coast, surrounded by some 200 members of the local community, who divided up to represent their respective stand-in families.

One young local child acted as their flower girl on their big day, where they hired a dj, and they danced the night away on the beach.

At the same time, Johnny’s mother Jeanne and brother Harry broke out the champagne in Shannonbanks to toast their nuptials in absentia.

Johnny, who is a co-founder of a technology company in London, also wished to encourage people that donating a kidney does not mean that they have to sacrifice living a full and healthy life. He donated his right kidney in 2007 and just 11 months later completed his first marathon in New York in under four hours.

However, he admitted that the Sierra Leone marathon was tougher than he expected, and completed the course in dizzying heat in five hours and 20 minutes.

“A lot of other more sensible people decided to do the 5k, 10k or half marathon,” he said, with a laugh.

Some 400 people took part in total, including about 30 doing the marathon, as the number of foreign travellers participating has dropped considerably this year due to the Ebola fears.

But he was motivated to raise funds for children left orphaned following the death of their parents to Ebola, and to try to promote the country, which he describes as “my version of paradise” as being safe to travel to again.

He raised over £6,000 for this marathon for a charity called Street Child, which provides support to orphans and children living on the street, and donations are still being accepted under Virgin Money Giving/Johnny Murnane (see below).

Johnny first went to Sierra Leone in 2012 for three months to volunteer with children for the Craig Bellamy Foundation, a football charity that uses football to teach leadership and to educate.

“The people were so welcoming, the country has amazing natural beauty and I’ve wanted to return ever since I left,” he said.

However, his plans were put on hold as Sierra Leone fought the Ebola virus, but now that it has largely been eradicated he wanted to travel there and “send a message to the world that Sierra Leone is safe again”.

“It really is just a stunning location, which many people don’t imagine about Sierra Leone. It’s my version of paradise.”

The west African country is expected to be declared Ebola-free by the World Health Organisation on Saturday, when it will have gone 42 days without any fresh case of the virus.

The disease has killed 3,589 people in Sierra Leone, and the overall the death toll for the outbreak in west Africa stands at 11,313.

To donate to Johnny’s cause see: http://uk.virginmoneygiving.com/fundraiser-web/fundraiser/showFundraiserProfilePage.action?userUrl=CarineandJohnnySierraLeone