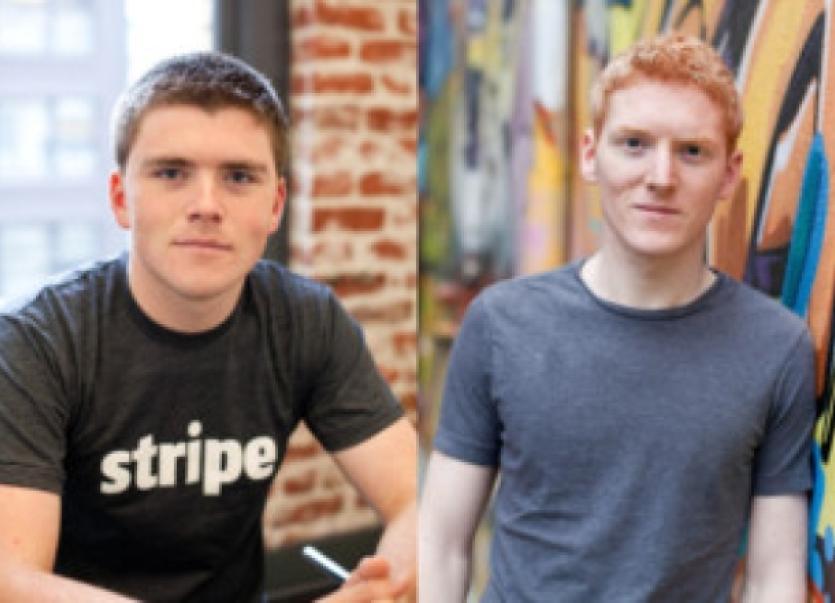 LIMERICK’S Collison brothers might be on the verge of a mind-boggling deal with Twitter, but remain “unaffected and ordinary” by their global success.

LIMERICK’S Collison brothers might be on the verge of a mind-boggling deal with Twitter, but remain “unaffected and ordinary” by their global success.

The Stripe co-founders, Patrick and John Collison from Castletroy, are reportedly in advanced discussions to create an online payment mechanism for the social media giant that would allow people to buy directly from Twitter, a deal that has helped to catapult the value of their company beyond the $1bn-mark.

The Silicon Valley tech millionaires, who shot to prominence in their teenage years, employ more than 80 people at their base in San Francisco and are backed in Stripe by some of the world’s foremost investors, chief among them Peter Thiel, the first investor in Facebook and a founder of Paypal.

The duo raised $80 million in a fresh round of funding this week, valuing Stripe at around $1.75 billion.

But Patrick, 25 and chief executive of Stripe, who won the Young Scientist & Technology Exhibition in 2005, then aged just 16, said that the duo have “no interest in selling the company” after the latest round of investment, which mead headline news around the world.

“John and I are very lucky to work with the people we do on building something for the long term, and we wouldn’t like to change that,” he said this week.

“This investment will hopefully enable us to speed up our hiring and international expansion. From the start, making Stripe available throughout the world has been a large part of our mission,” he added.

Casteltroy College principal Padraig Flanagan told the Limerick Leader that the school community had “great pride” in the success of its most famous past pupils.

“They are models for the students,” said the principal.

“They came from ordinary backgrounds and are very bright guys, but acknowledge the support they got in the school, and from our point of view with present day youngsters, they are an example of what is possible.

“We have great pride as a school community in their achievements and the fact that Patrick keeps contact with a number of colleagues, including visiting them at Christmas just gone, and is totally unaffected, nice to meet with, from that point of view it makes it that little bit sweeter that they are unaffected and ordinary.”