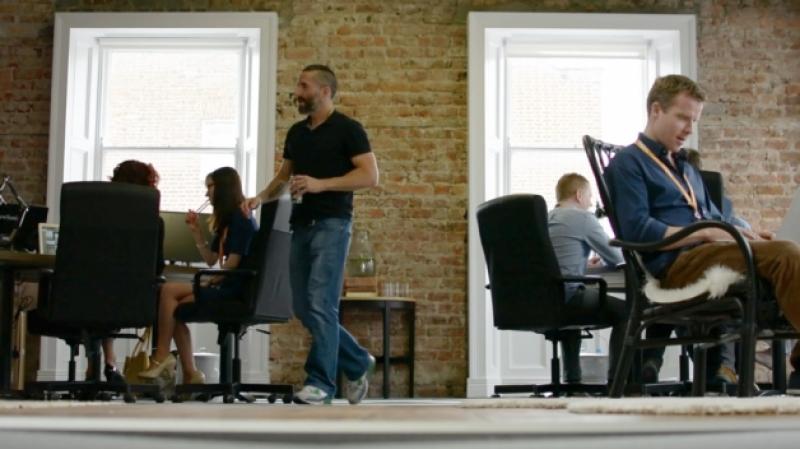 TECKRO has bought and refurbished the landmark Bank Bar building in Limerick city to develop a ‘world-class’ company. Its founders speak exclusively to Alan Owens about their plans.

AS soon as they walked in, guided by an auctioneer and his trusty flashlight, they knew it was the right place.

Brothers Nigel and Gary Hughes, who have founded clinical research company Teckro along with Jacek Skrzypiec, remember entering the Bank Bar building on O’Connell Street in the city for the first time. Dust, pigeons and the ghosts of commerce past greeted them, but there was something that stopped them in their tracks, a blank canvas to create the workspace they wanted that inspired them to see beyond disrepair.

Eighteen months later and the trio have created a unique, if not revolutionary office environment in the city, one that they believe will encourage and not limit interactions between their staff. Of those, 17 have been hired in under three months, and they have big plans to grow over the next 12-18 months. It is also currently hiring for a number of positions.

“When we came in and we saw this building, we thought, if we had 100, 150 people in here, wouldn’t it be brilliant? Wouldn’t it be great fun, looking out on the city, how productive could we be, how creative could we be?” says Nigel, a pharmacist by trade.

“We want to be in the city with that energy and take in that buzz of being in the city, but also within the building, that it would be a very energetic sort of place to work,” adds Gary, who comes from an industrial design background.

“Our aim is to be very ambitious with the company. We feel we know how to create a world class, high performance culture where you get really good people together, you work on big problems, build a lot of momentum around the brand and the idea and you can make it successful.

“The scale of that success is the unknown factor. We are very ambitious, we would like to create a world-class company based out of Limerick. To do that, you need to create an environment where it is very much set up for work to be done, but it is also set up for that exchange of ideas, those collisions of ideas between random meetings.”

The brothers, who hail from Sixmilebridge originally, together with Jacek – the software expert – founded clinical research company Firecrest in Galway in 2001 before moving it to Limerick and subsequently selling it in 2011 after it had reached around 150 employees. The trio then set about finding their next project. The main goal, having been based in a business park in Castletroy, was to be in the city.

Teckro, a technology company focusing on clinical research and now based in the heart of the city centre, is the result. They have developed a “unique platform to enable clinical research to be much better than it currently is”, a product that will launch in the near future.

They believe it will scale quickly.

Interior designer Tullio Orlandi was employed to interpret that vision and the results are stunning. Beautifully furnished and modern multifunctional workspaces abound with hangout areas, meeting rooms and lots of space, 10,000 square feet or so. The bar has been revamped and retained, with conferencing facilities, a barista coffee machine and a phonebox for private calls.

The former nightclub upstairs has been remodelled as an office space, complete with lights suspended from the ceiling, with the inclusion of a cinema screening room and table tennis table.

Gary and Nigel wanted to create a space that would be fun to work in and fuel creativity. That interaction between staff, who hail mostly from a software programming or multimedia background, is the ‘culture’ they speak of.

“Having been here for a few months now, it is exactly what we thought it would be,” says Nigel. “Our priority was to get the interior of the building right.”

“When somebody comes into this place, we want them to get the sense of energy that we feel,” says Gary.

“For us it is a very deliberate statement and we are trying to say we have big ambitions for what we are trying to do with the company. We are investing in the facility because it is the culture that we want to support and in turn attract world class people. Hopefully we will have an opportunity to create something really special here.

“It is about bringing people together and getting the best out of them around a shared vision. We found the building but we spent a long time figuring out what we were going to do with it, and everything was very deliberate to get to where we are now.”

They see a resurgent city, a place that can nurture ideas and aid growth, perhaps even spur an ecosystem of companies to propel Limerick up the food chain for future inward investment. A company like Uber deciding to locate in the city was a welcome indication that Teckro had made the right decision.

“There is an opportunity in cities and it is where people want to be, because you have got all the services, the lifestyle factors, all of those things,” says Gary. “Limerick has that opportunity, and it is not going to be around for very long.”

“Innovation and creativity is in the walls, this building has seen it all,” adds Nigel. “It has seen people come in looking for a loan to set up a business and more recently brainstorm over a few drinks. All we are doing is continuing that story.”

Creating a ‘shared hub’ in the Bank Bar building

WHILE Teckro is aiming to scale quickly over the next 12-18 months, in the interim period, the company is open to using the extra space in the Bank Bar building as a “shared workspace” with other companies or individuals.

The move towards ‘co-working’ is a popular one and Teckro is open to the idea of creating a sort of innovation hub in its offices.

To that end, it is gearing up to launch a website this week with details of how companies could use the space on a temporary basis. Nigel says the idea is to “make space available to companies that would fit in with the culture that we are trying to create.

“And our teams would benefit from having them here in turn. It would be great for the city if there was a building that was the equivalent of an innovation hub, with companies working and interacting, sharing ideas and experiences.”