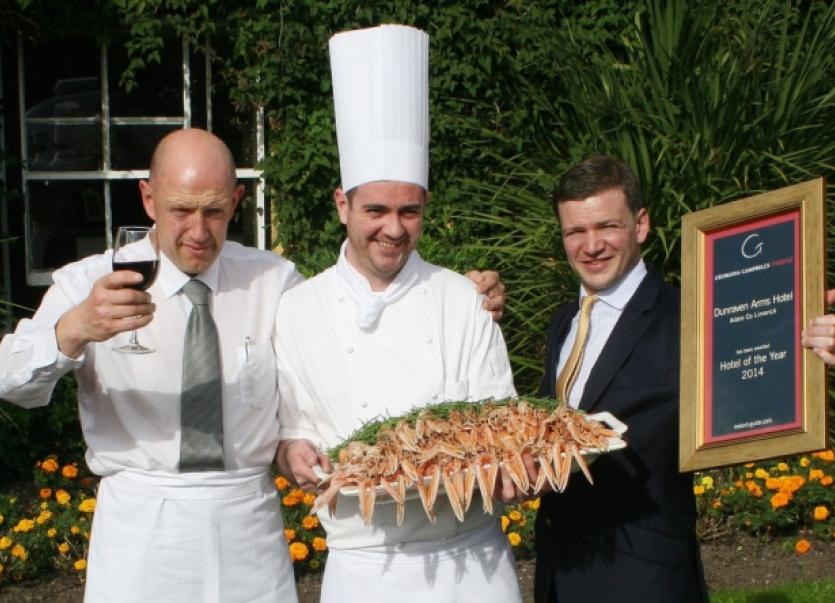 LIMERICK hotels topped the table at the prestigious Georgina Campbell awards, as The Dunraven Arms Hotel, The Strand Hotel and The Echo Lodge took home the country’s top hospitality prizes.

LIMERICK hotels topped the table at the prestigious Georgina Campbell awards, as The Dunraven Arms Hotel, The Strand Hotel and The Echo Lodge took home the country’s top hospitality prizes.

It is the second time in 10 years the renowned Adare hotel has received the award, said proprietor Louis Murphy.

“It’s our second time winning this award and the fact that we have won during these times, it makes us very proud.

“The customers are always looking for a quality service and value for money, and that is the key ingredient which is what we have been doing. We continue to offer our customers that,” he said.

Mr Murphy said they are “lucky” to be based in a village surrounded by good business.

“Adare is such a beautiful village and we are so lucky, as a hotel, to be here. It has become a fantastic destination, with the restaurants, shops and golf course. After all, it is considered Ireland’s tidiest town,” he said.

The manager added it will be important for the management and staff to maintain and improve their standards in years to come.

“There is ongoing reinvestment in the product and we are focusing to keep the standard of the decor and everything else up to the highest standard.”

The Echo Lodge was praised for its “genuine and thoughtful” approach towards their customers’ needs.

“It would be hard to imagine anywhere better as a hideaway than Dan Mullane’s spacious Victorian property.

“This magical place has immense appeal to many different types of guest and, although it is actually a four star hotel, nothing could be further from the image that normally conveys,” the report said, furthemore saying it is “a hotel like no other”.

The Strand Hotel manager, Sean Lally told the Limerick Leader that the management and staff were “really over the moon” when they scooped their two awards.

He paid a tribute to Limerick’s tourism sector, thanking the new Shannon infrastructure and the reopening of King John’s Castle which have attracted loyal customers, he said.

“We are always concentrating on improving everything in the hotel, especially with our breakfast menu. We would always check out the dietary trends. For example, we have pancakes, which is very popular with the kids. We also have a buffet offering, so people can help themselves. We would have also upgraded our conference rooms in the last three to four months. We recarpeted the rooms and brought in new furniture, too. We also brought in wifi, which has become very popular,” he said.