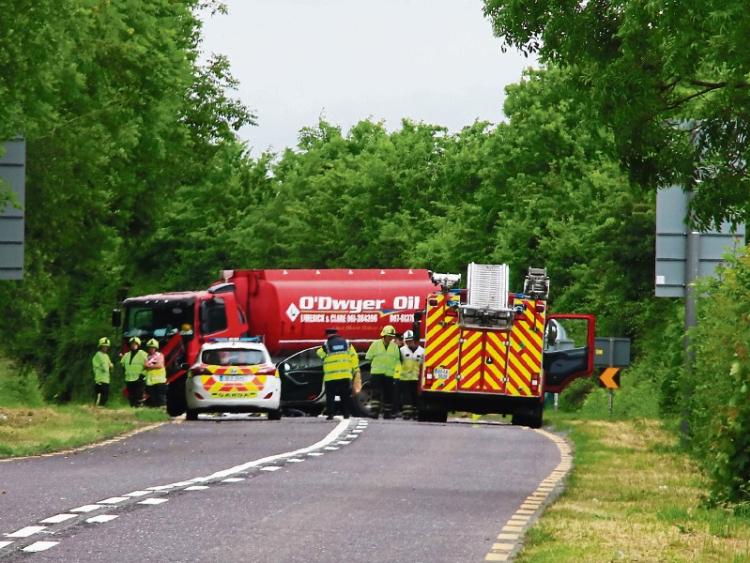 The scene of the fatal accident on the N24 near Dromkeen | Picture: Adrian Butler

AN elderly couple has died following a head-on collision near Dromkeen on the main Limerick to Tipperary Road.

Gardai have now confirmed details of the accident, in which a couple who were the occupants of a small English-registered car which collided with an oil truck on the N24 at around 10.30am this Wednesday.

Gardai said the deceased were a husband and wife who were visiting from the UK, a  man in his 80s and woman in her 70s, both of whom were pronounced dead at the scene of a collision involving a car and a lorry on the N24 Limerick to Tipperary road.

The collision occurred on a straight stretch of road at Gortnadromin near the village of Dromkeen.

The driver of the lorry, a man in his 40s, was taken by ambulance to University Hospital Limerick where his condition is not thought to be life threatening.

A significant stretch of the normally busy road remains eerily quiet as the main thoroughfare has been closed and diversions are in place.

The crash site remains closed to traffic and local diversions are in place. Garda Forensic Collision Investigators and local Divisional scene of crime officers are examining the scene. Gardai in Bruff have appealed for witnesses to the crash, which occurred shortly before 11am this Wednesday.

The accident happened on the approach to a bend – around 500 metres past the 100km/h speed signs as you leave Dromkeen travelling travelling in the direction of Limerick.

“I didn’t see what happened but I heard an awful loud bang, I thought someone had crashed into the building,” said John Keogh, who works at the Furniture Man store which is located several hundred metres from the scene of the accident.

The was a sense of shock at nearby Dromkeen stores as customers and staff learned of the fatal accident, which is the latest to occur on the N24.

It’s understood the car in which the deceased were travelling was heading towards the city while the truck was travelling in the opposite direction.

“It happened just above my house. It was a lorry and a car. The whole front of the car is badly damaged.

“I happened to be coming back. I came across it. It was a small car with an English registration. There is quite a bit of it scattered around the road. It is a terrible thing to see. It is very sad. There is a lot of shock in the locality,” said local resident, Jim Blackwell, who praised the paramedics, calling them “tremendous people”.

Emergency personnel arrived at the scene within minutes of the alarm being raised and gardai have confirmed the road is likely to remain closed for several hours.

The N24 Limerick is closed in both directions just north of Kilteely-Dromkeen village, following a serious road traffic collision between a truck and a car. Local diversions are in place.

Traffic in and around the area is chaotic with motorists being diverted via secondary and minor local roads.

A local priest and a doctor also attended the scene of the accident this Wednesday afternoon.