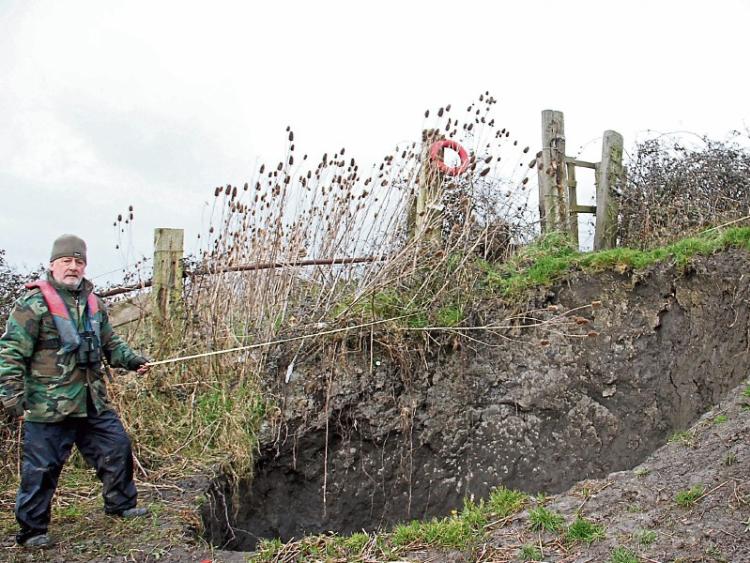 Pat Murphy pictured alongside the sinkhole near Condell Road

PEDESTRIANS walking along the banks of the Shannon beside the Condell Road have been warned of a sinkhole which has emerged in the last week.

Thomondgate man Pat Murphy was walking the route to a birdwatching event in Coonagh on Thursday night last when he happened upon the big break in the land, at Cleeve's Bank.

"When we saw it, we just thought 'Jesus, look at this'. It isn't a subsidence or a collapse. Everything has disappeared right down," he said, "I don't have a clue how it happened. It's one of those things: it could have happened anywhere."

However, he warned it is very dangerous, and advised people to either be vigilant, or aboid the area.

"If someone was to stroll out there in the dark, good luck to them, they'd never get out. It needs to be filled in, or that part of the bank needs to be closed off," he told the Limerick Leader, "If we had walked back that evening in the dark, we could have fallen into it".

Pat also raised concerns over local cattle who might wander into the Cleeve's Bank.

He reported the matter to Limerick City and County Council this Friday, and said a site visit has been paid.

The Limerick Leader has also contacted the local authority for comment.