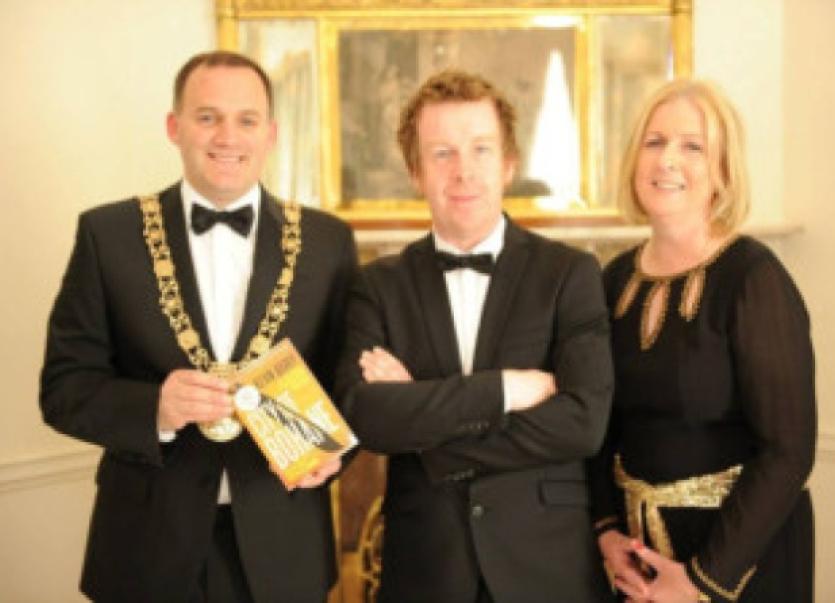 AWARD-WINNING writer Kevin Barry is currently in talks to have his film script about the horse racing industry produced by a major Dublin film company.

AWARD-WINNING writer Kevin Barry is currently in talks to have his film script about the horse racing industry produced by a major Dublin film company.

Barry, a Limerick native, who scooped the €100,000 Impac award last weekend, has written a film script called The Gee Gees, based on the relationship between an Irish jockey, and his horse trainer father, which he said is “galloping along very well”.

It has been written for Element Pictures, which was behind such award-winning Irish films as The Guard, Omagh, Garage and The Wind that Shakes the Barley.

“It’s been great fun to write it, because I don’t know anything about horse racing, so I’m chancing my arm, but I’m trying to get to grips with the language of the racing world. You can forget how huge that world is, so you have to get the details very right.”

However, Barry is not spending hours on end in his local bookmakers, taking note of the language of punters, believing it wouldn’t be a safe bet due to his recent windfall.

Speaking about the honour of receiving the Impac, one of the largest literary prizes in the world, he told the Limerick Leader: “I’m back to my desk now, and that will certainly put manners on you quick enough. It’s brilliant, I’m in great form, and now it’s a matter of getting the next thing right.”

For the Impac, City of Bohane, his first novel, beat off competition from 153 other titles, nominated by 160 libraries from 44 countries.

“When you’re on a shortlist you have a chance, and there are really brilliant writers on the shortlist. It was amazing and a real thrill to  win it.

“The book has been out for two years and it has been tipping along nicely, this has given it a real boost and sales have been motoring since the weekend. It’s great because as a writer you never know what kind of year you’re going to have. That’s the nature of it, so this keeps the ship nice and steady for a while now anyway.”

Barry was the only Irish author on this year’s shortlist, and is the third Irish writer to win the Impac, after Colum McCann and Colm Tóibín.

Set 40 years in the future, the once-great city of Bohane on the west coast of Ireland is on its knees, infested by vice and split along tribal lines, taking its influences from films and graphic novels. With its unique language style, described as a “vaulting linguistic invention”, does it translate to foreign audiences?

“I think the difficulty of how books travel, so to speak, can be overstated. I always think if we can get the talk in something like The Wire, which is a very dense Baltimore dialect, than they should have no problem getting us.”

“DVD box sets were a huge influence on City of Bohane - things like The Wire, again, and Deadwood, and The Sopranos. These are brilliant shows with great structure, great plotting, great dialogue, and I think novelists should steal from them at will.”

“The book is also influenced by trashy 70s gang films I would have grown up with, like The Warriors and The Wanderers. Also things like The Godfather, West Side Story, or you could even point to something like Mack the Knife from the Threepenny Opera.”

A French version of the book is coming early next year, and it is currently being translated in German, with five or six other translations due.

An edition of his short stories, There are Little Kingdoms, is also coming out in Italy and Thailand soon.

He is currently working on two film scripts of City of Bohane for the Irish company Parallel Films, which was behind many notable films including Albert Nobbs, Intermissions and Breakfast on Pluto.

“It’s a slow process, but I really enjoy writing the scripts, because it’s so different to writing the books and I love writing dialogue. The script is very close to the book so there’ll definitely be Irish accents,” he said of its potential future audience.

Now living in south county Sligo, “a good quiet place to get stuff done, with no distractions”, with his wife Olivia, he is also working on a new novel, but is determined to keep its contents “top secret until it’s all down” on paper.