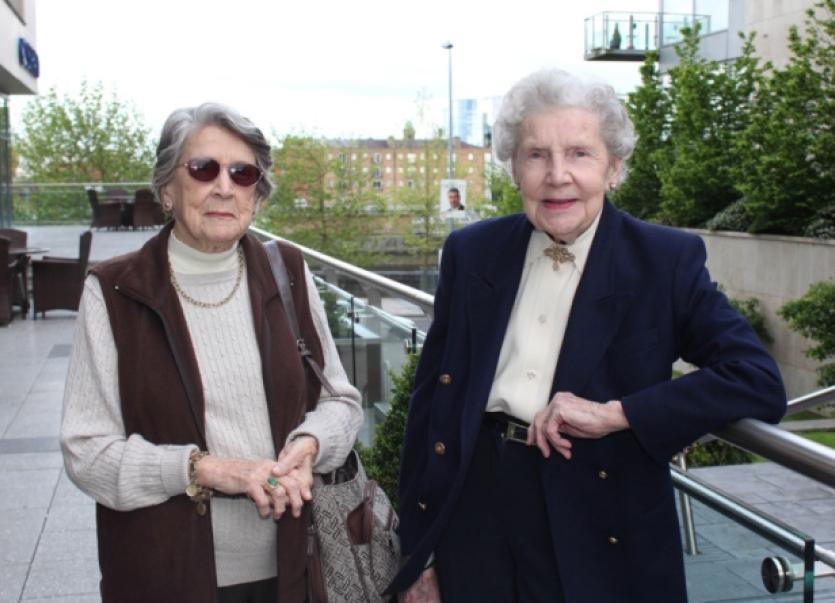 A STAY at Limerick’s Strand Hotel is always a pleasure but for Kay Morrhall and Clare O’Brien Dodd, the place brings back special memories.

A STAY at Limerick’s Strand Hotel is always a pleasure but for Kay Morrhall and Clare O’Brien Dodd, the place brings back special memories.

There has been a hotel on the site since the 1960s but the sisters’ connection with the place goes back further than that - to their time playing as children at Strand House, the mansion that was home to their aunt Nancy and her husband Stephen O’Mara (Jnr), bacon factory magnate, nationalist and former Mayor of Limerick.

Strand House was also where their more famous aunt, the novelist Kate O’Brien, would stay during visits to her native city.

Ms Morrhall, who lives in England, and Ms O’Brien Dodd, who resides near Atlanta, Georgia, were in Limerick to visit Rosemary O’Brien, wife of their uncle Gerald, and who is “bright as a bird in her 102nd year”, according to Kay.

And the stay at the Strand coincided with a history of the hotel and the site being undertaken by general manager Sean Lally and Limerick Civic Trust - a history of which the O’Brien and the O’Mara families form a significant part.

“We are working with the Civic Trust and with Donough O’Brien (nephew of Kate and cousin of Clare and Kay) to complete a history of the hotel and Strand House which we hope to put up on display in the hotel in the next couple of weeks. And there is an amazing history to the place. We came across a photograph of De Valera staying at Strand House with the chief of staff of the IRA on the night the Treaty was signed by Collins,” said Mr Lally.

Property around Strand House was given by the O’Mara family to the Corporation in the 1960s with the intention of building civic offices, a plan that never came to fruition. It has since been home to the Intercontinental, Jury’s, Hilton and now The Strand Hotel.

Memories of Strand House and Sarsfield Bridge were evoked by Kate O’Brien herself in some of her writings.

Kay and Clare grew up in England, where Kate O’Brien’s oldest brother Jack had moved. While living in Essex, they would see a lot of Auntie Kate, who was then based in London.

Kate O’Brien’s stature as writer was such that she was name-checked in Brief Encounter. And the recently published correspondence between Jackie Kennedy and Dublin priest Fr Joseph Leonard showed the Limerick author had admirers in the White House.

“We will both enjoy reading it because Kate O’Brien has made a great name for herself in this country with her charming style,” the First Lady wrote in January 1963 of the priest’s gift of O’Brien’s My Ireland.

But Clare and Kay had little idea growing up what a significant writer - arguably Limerick’s greatest - she was or how scandalised Catholic Ireland was at the time by subject matter around sexuality and feminism.

“We knew she was a writer and I do remember once there was a woman talking to my father about her,” recalled Kay.

“She was going on and on about Auntie Kate’s books and Father, who didn’t like being bored to death, said ‘Ah sure I know all this. Wasn’t she only my sister”. The whole thing was kind of dismissed like that and we were never really brought up with the idea that she was a famous aunt or that she was notorious in some way.

“As far as we were concerned, she was just Auntie Kate. But she was very kind and very generous,” Kay said, recalling the gift of a Russian doll Kate had sent to her grand-niece Jane after making an impulsive visit to the Soviet Union.

During the Blitz, both Clare and Kay were moved to Limerick for a year, where they followed Auntie Kate into the corridors of Laurel Hill.

Like their illustrious aunt, the ladies have mixed feelings about their times with the nuns.

The Land of Spices - one of Kate O’Brien’s most famous works and one which was banned in Ireland - is set in a convent obviously modelled on the Limerick school.

And while Kate O’Brien wrote that she left Laurel Hill “an unbeliever”, a respect for the formidable nuns is also present in her works. And no wonder, given that two of Kate O’Brien’s aunts were themselves were nuns.

“I do remember Aunt Fan, who was our great-aunt, wanted to read one of the books,” recalled Clare.

“Auntie Nance took it to her but she pinned two pages together because there was something in there. She said ‘Now dear Fan, you can read it but just don’t take the pins out’ because Aunt Fan was a nun in the Presentation order,” she joked.