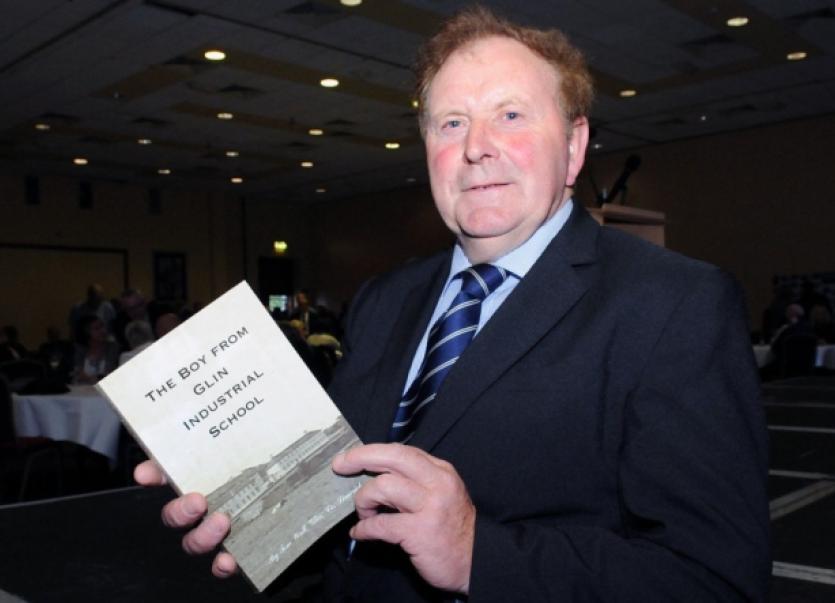 “WHEN you take away a child’s innocence or abuse a child in any way, you have destroyed the greatest treasure of all. Neither gold nor silver can give back to that child what you have taken from them.”

“WHEN you take away a child’s innocence or abuse a child in any way, you have destroyed the greatest treasure of all. Neither gold nor silver can give back to that child what you have taken from them.”

These were Tom Wall’s opening words when he spoke at the launch of his book, The Boy from Glin Industrial School at the weekend.

The launch, by Cathaoirleach John Sheahan, was part of a reunion of over 60 past-pupils from Glin Industrial School and which also included a reconciliation Mass.

Tom vowed to write a survivor’s account after the Ryan report on industrial schools was released in 2009 and his story was carried in the Limerick Leader. As a result, he was honoured as a Limerick Leader Person of the Month.

“To me this was not a personal award. It was an award for all the children who were detained in Glin Industrial School and all the industrial schools here in Ireland,” he said last Saturday.

More than 35,000 Irish children were detained in the industrial schools system in Ireland, where they had little chance of developing a normal childhood, Tom told the audience made up of past-pupils and their families in their first-ever get together.

“Many of you will recognise yourselves in the photos in this book, and you will also recognise many of yuor classmates who are unable to be here with us today. Each and every one of us knows of someone of our friends who are still in care in institutions, some who turned to drink or drugs, some who are sleeping on the streets here in Limerick, Cork, Galway, Dublin and London and suicide is, for many, their only legacy.”

“We must remember them here today as they cannot be with us,” he added with great poignancy. And he dedicated the book to all those detained in the industrial school system.

While almost every page in Tom’s book reveals aspects of a system that was cruel and inhuman, and one which over 35,000 Irish children endured, a few short sentences are, in some ways, the most telling.

“With a bit of help, the children could have been kept at home,” Tom writes. Glin, like other industrial schools, was primarily a place for the boys of the poor.

In another section, he writes: “I had seen young lads arrive with all the bravado and spirit of youth… I saw how quickly the system broke their spirit.”

And after he had been raped by a Brother at the age of eight, Tom writes: “As I lay there in agony, I wondered why a holy man would be doing such terrible things to me.” He fell asleep, he tells us, praying to Our Lady to help him.

Later, following his abuse by the Christian Brother, Tom was regarded as “fair game” by some older boys who in turn abused him Tom writes: “I felt something died inside my soul that day.”

In page after page, Tom describes the harsh regime in Glin: the beatings, the cold, the hunger, the ever-present lice, the fear, the daily humiliations. And while there are some lighter passages, such as when he talks about rawking orchards, the reader is all too aware it was hunger rather than boyish high-spirits that prompted the raids.

The most harrowing passages in the book deal with the physical, sexual and emotional abuse of the boys.

But in some ways the most damning pages are the ones which outline how brothers who abused elsewhere subsequently ended up in Glin. That same chapter also reveals the extent to which the leading figures in the Christian Brothers congregation knew what was happening. “He is a great danger to us,” the Superior General writes of one such brother.

The story of Glin, and of other industrial schools, is one of silence and cover-up. As one of Tom’s tormentors succinctly put it: “You have to learn to keep your trap shut here.”

Tom does deal with the few but worthy attempts by various people, including a nightwatchman in Glin, to investigate and secure change. And he deals also with the redress process in which some figures continued to deny wrong-doing. He also records for posterity, the short but stark condemnation of the Glin Industrial School contained within Justice Ryan’s report.

It is something of an understatement to say that Tom Wall’s book is not easy to read. But it should be required reading for everyone in power, political and otherwise, in this country and for every citizen. It is the story, in stark, unadorned language, of how we failed the children of the nation.

Let us not fail them again by ignoring this book.