Legacy of Limerick co-founder of Concern lives on 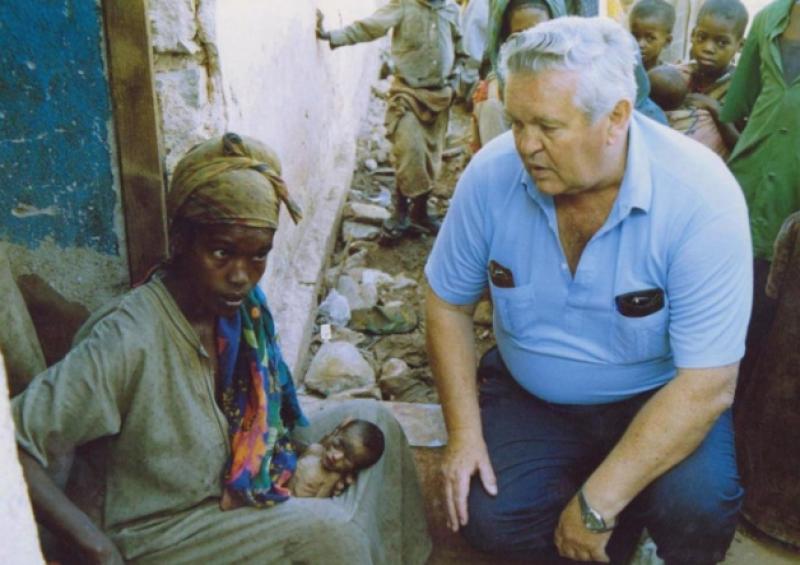 Those were the words of the late Fr Aengus Finucane, the stalwart of the charity Concern, and he lived his life by that ethos.

His life’s work - from being involved in the Penny Dinners with St Vincent de Paul in the native Limerick, to building a charitable organisation that now reaches 12 million people in the world’s poorest countries - has been documented in a new book by the well-known author Deirdre Purcell.

Entitled ‘Aengus Finucane - In the Heart of Concern’, Purcell, who met Aengus briefly on three occasions throughout his life, interviewed 85 people across a number of countries over two years to produce this 344-page testament of his life’s work.

Aengus, from the Shelbourne Road, passed away in 2009 at the age of 77, but his legacy lives on. In 1968, he and his brother Jack, as well as Fr Raymond Kennedy and John and Kay O’Loughlin Kennedy, founded Africa Concern, which later became Concern. Today it has more than 3,000 staff working around the world. Launching the book in O’Mahony’s in Limerick, Dominic MacSorley, the chief executive of Concern, said while the tradition of Irish humanitarian work going back a century to the missionaries is well known, it has been rarely documented.

Aengus, who became honorary president of Concern Worldwide upon retiring in 1997, was he said an “extra-ordinary man and Deirdre has captured that spirit.”

Each and everyone who attended the launch spoke of a larger than life person, a man of many facets, who is difficult to capture fully.

“Aengus persuaded people to go to Bangladesh when they had never been to Belfast, or were ever on a flight before,” said Mr MacSorley.

Deirdre Purcell’s connections with Concern began in 1985, when she had started work as a journalist with The Sunday Tribune, under Limerickman and now TV3 broadcaster Vincent Browne. “Like everyone else we were utterly shocked by the images [of the famine] in Ethiopia,” she said.

While she told Vincent that they should be in Africa covering the story, she said she regarded herself as the ‘flower show correspondent’, and believed he would send someone else, but he insisted she should go. “I had never covered a news story ... never saw a dead body,” she said.

Vincent took her out for coffee and told her the entire history of Ethiopia. “I was just mind-boggled. Then after about an hour he said ‘Forget all that, keep your eyes and your ears open.’”

Aengus waved them off at the airport with a “magisterial goodbye” and with that her life changed forever. When a baby died at her feet she said she “looked up and never felt the same way again”.

Browne was among those interviewed for the book, as he had also spent time with Concern in Somalia.

“It changed his life as well, and his attitude, and you can see today that he brings the Third World into a lot of debates on his programme.”

“Vincent said Aengus was the only person in the world who influenced him.”

This book, she said, is really a celebration of Aengus, whom she found incredibly hospitable but was also slightly intimidated. It is also an attempt to get the know the man behind the public persona, who befriended many famous people in his drive to propel Concern, including the Clintons, Bono, Nelson Mandela, Bob Geldof, Dermot Morgan, Frank McCourt, Seamus Heaney, and Gabriel Byrne, amongst others. “I wonder if people ever got to know the real Aengus? Yes, he was a great party man, very gregarious, but what were his inner thoughts? What did he think about himself? He was a very complex man, with a deep, deep spirituality. People said they felt a deep sense of peace when he celebrated mass.”

She was approached by Concern to write a sort of memorial of Aengus “because he was so influential and important to Concern. I didn’t know him very well, but his reputation preceded him. I tried to bring him alive through other people’s memories. He was a giant of a person.”

Aengus, she said, had three families – his family in Limerick, the Holy Ghost Fathers (or Spiritans), and Concern – a holy trinity, if you like.

But there is also a fourth – his love for his native city.

Fr Mick Reynolds said everyone knew how much receiving the Freedom of Limerick city in 2005, alongside his brother Jack, now 78, meant to Aengus.

“Every Finucane, every Limerick person, every Concern person, every Spiritan, pal and all who were merely tangentially involved, knew about Aengus’s exulation at being granted the freedom of that city. For him it trumped all other awards and honours with which he had been laden during his lifetime,” Fr Reynolds told Purcell.

A fervent supporter of Munster rugby, and Shannon Rugby Club, he was present in Thomond Park when Munster famously defeated the New Zealand All Blacks.

“According to informants ever after, in Cardiff, Twickenham, anywhere he could catch a match involving Ireland or his own team, when asked by neighbouring spectators where he was form, he never answered ‘Ireland’ or even ‘Limerick’, it was always ‘Munster’,” she wrote.

Even when was a boy, he became involved in the Penny Dinners service run by the local conference of the St Vincent de Paul.

Described as stubborn, a man with incredible drive and unquenchable energy, Patsy said her brother was also someone who didn’t like to lose in any realm.

“When there was a family game at home in Limerick, it went on until three or four in the morning, and this was a man who’d be driving back in the morning to Dublin!

“‘We’ll have Mass in the morning at eight’, he would pronounce while laying out the tiles for the next game, but when he saw all the rest of us getting up to leave the table, would ask, genuinely surprised: ‘Why are you leaving?’ He literally did not comprehend that people got tired.”

Limerick’s connections with Concern continue to run deep. His niece Susan Finucane, from the Ennis Road, has worked with their programmes in Rwanda, Burundi, Haiti and Tanzania. Aine Fay, from the Shelbourne Road, joined Concern in 1983, working in Bangladesh, Ethiopia, Sudan, and Pakistan, was country director in a number of locations, and is now in their New York office.

Siobhan Walsh, from Fedamore, and the executive director Concern Worldwide US, earlier described Aengus as “my true north, my compass.”

Photographer Liam Burke of the local agency Press22 has generously given his time in volunteering to travel overseas with Concern, travelling to Bangladesh, Angola and Cambodia, amongst many other places, and took stark images of the great need that exists, which have been used for public appeals.

His iconic image of a boy carrying his little brother, ‘He ain’t heavy, he’s my brother’, taken in Ethiopia, helped catapult the scene of starvation to the world.

His brother Jack, though retired from Concern is still involved, said “Aengus was larger than life. After he died a lot of people said ‘Why don’t you write a book about him?’ I think it captures him and the passion he had. He used to dream about Concern, and how it could develop it. To capture all of that in a book is practically impossible.”

President Michael D. Higgins, who grew up on the city’s Ennis Road, has also paid tribute to him, saying: “Aengus was a born leader who didn’t like bureaucracy, and wasn’t he right?”

The book, published by New Island, is now available locally, priced at €24.99