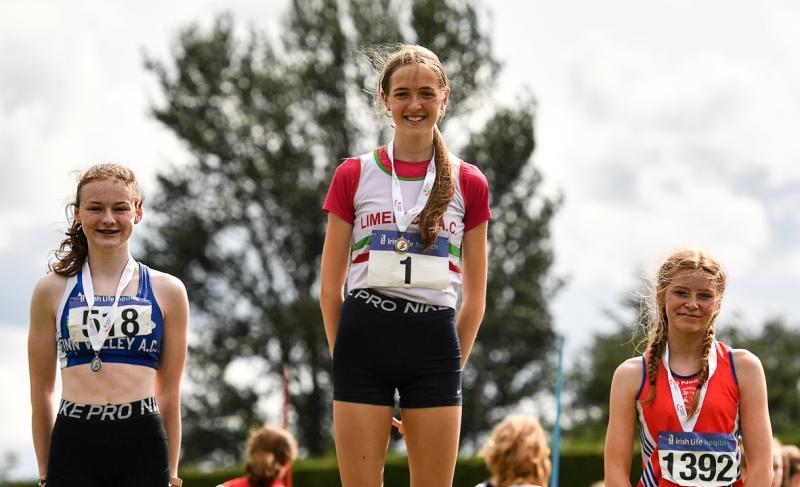 Aoife Grimes, of Limerick AC, centre, who won the gold medal in the Girl's U15 Long Jump at the National Juvenile Track and Field Championships

In perfect conditions and a challenging course, the women’s race was first and in the closing stages Katarzyna Bobka (An Brú) pulled clear of teammate Caitríona Farrell to take the Senior title in 27:22.

On a great day for An Brú they took both Senior and Novice team titles. Kate Bobka also took Novice and Masters titles. Niall Shanahan (An Brú) justified his ‘pre-race favourite tag’ as he comfortably won the men’s race in 19:57.

He was followed in second by Niall O’Callaghan (West Limerick) in 20:49 with Niall O’Riordan (An Brú) taking third in 20:55.

A VERY large contingent of Limerick’s best young athletes travelled to the home of Tullamore Harriers for the first of two weekends of National Competition.

Many were competing at National level for the first time and there was some excellent performances. Well done to all involved.

Maeve Purtill also took also took Bronze in the Discus. Eimear Ryan (Dooneen) was 6th in the Javelin (20.72) and 7th in the Shot Putt. Clubmate Molly Mahoney competed well in the U14 200m.