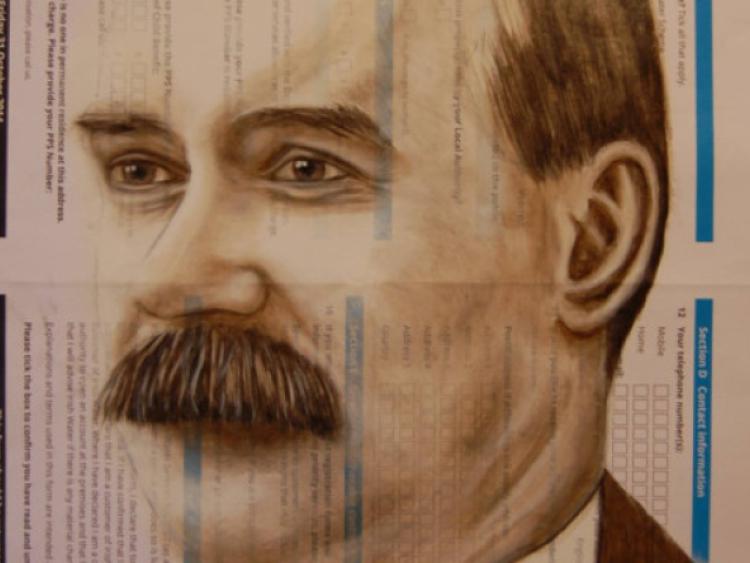 AN ARTIST opposed to the introduction of water charges has decided to make “good use” of his Irish Water application, by using it as a canvas for an oil portrait of James Connolly.

AN ARTIST opposed to the introduction of water charges has decided to make “good use” of his Irish Water application, by using it as a canvas for an oil portrait of James Connolly.

Ger Kenny, 34, who is originally from Limerick city, earlier caught the public’s imagination when he refused to pay the household charge and property tax, and instead spent €100 on painting a portrait of Taoiseach Enda Kenny by using twenty €5 notes.

Now, Ger has received widespread support from the public for his latest political work, with over 700 ‘shares’ of his portrait of Connolly after he posted it on Facebook.

He said he chose Connolly, the Republican and socialist who died in 1916, as his latest portrait subject as he believes “he would never have put the needs of financial institutions or bondholders ahead of the needs of an Irish citizen.”

“Connolly would never have taken from the pockets of the most vulnerable people in society to top up the over flowing pockets of some faceless bondholder. I only wish that we had a man like Connolly to lead us today,” he said.

“I won’t be handing a cent to Irish Water as I have already paid for the water in my taps through my income tax, PRSI, USC and the levy on motor tax,” he explained.

“Strange isn’t it how water quality, conservation and infrastructure wasn’t an issue at the height of the boom when the country was rolling in cash but now that we don’t have a penny it’s on the agenda.

“This government continues to ignore the people and have any dialogue with us but I think now most people have had enough and are starting to do something about it.”

The Montpelier resident, who built his house in east Limerick 10 years ago, said he and his wife put a lot of money into building their house, which is now in “slight negative equity” and he does not believe they should be “re-taxed” again.

Mr Kenny said that he’s been lucky to keep his job in IT in Shannon throughout the recession, and at the time of the last painting said he believed the household charge was “wrong and immoral”.

The well known, self taught, local artist has previously exhibited his work in the Hunt Museum, alongside the Limerick Art Society, and in the University of Limerick, as well as donating works to charity.