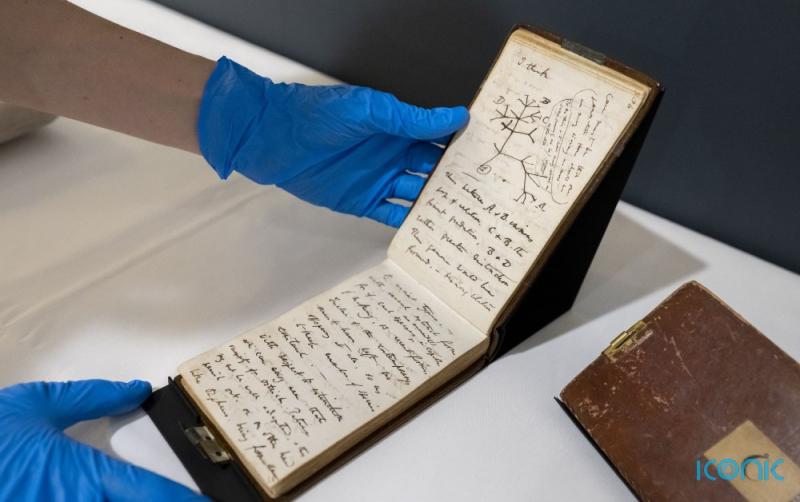 Two Charles Darwin manuscripts anonymously returned to Cambridge University Library more than 20 years after they were found to be missing are to go on public display for the first time this century.

The precious items were discovered to be missing in 2001. The manuscripts were initially believed to have been put on a wrong shelf, but were reported as stolen in October 2020 after the failure of extensive searches.

On March 9 this year, an unknown person left them outside the librarian’s office in a pink gift bag, with a typed note on an envelope wishing a Happy Easter to the librarian.

The area where the bag was left was not covered by CCTV.

The notebooks – one of which contains Darwin’s famous 1837 Tree of Life sketch – will be displayed as part of the Darwin In Conversation exhibition at the library, from Saturday until December 3.

Professor Jim Secord, director of Darwin Correspondence Project, said the notebooks are the “place where Darwin works out his theory of evolution”.

“When we think about Darwin and how he discovered evolution we often think just about the Beagle voyage and the Galapagos but in fact the main work of making the theory was done in London after he got back,” he said.

“Darwin was living in a bachelor pad and he was keeping these notebooks which were largely secret and he’d carry them around with him and when he had a good idea or he’d get an observation, he’d write it down.

“The notebooks really record that process and for me it’s a bit like stream of consciousness writing.”

He added: “When we see the notebooks we’re really seeing one of the great moments of the process of scientific discovery and in fact world history.”

Prof Secord said that putting the manuscripts on public display allows people to see a “direct connection with the past”.

“It’s something we feel very strongly, it has a kind of aura about it which I think is very powerful,” he said.

“This is somebody who’s come back from a long sea voyage, he’s in his 20s, he kept his intellectual powers but there’s all sorts of everyday stuff in there.

“It’s not a diary but you can tell he’s interacting with people.

“One of the notebooks has a place where he reports a dream of being hung.”

Dr Alison Pearn, associate director of the Darwin Correspondence Project, said she was “overwhelmed with relief” when the notebooks were returned.

She said she wanted the manuscripts to go on display as the “library’s mission is to make its material available to the public”, adding that the items are “definitely safe”.

The team curating the Darwin In Conversation exhibition identified more than 15,000 letters from around the world.

Dr Pearn said correspondence was “integral” to how Darwin worked and “he needed those correspondents to send him information from all over the world but also to bounce ideas off, to critique his work”.

Among the exhibits is a letter from Darwin’s neighbour and childhood friend Sarah Owen, who wrote that she was sending a lock of hair, which does not survive, and a jewelled pin.

“We want people to take away that he was human,” said Dr Pearn.

“He wasn’t born with a beard.

“He was a very young man once.

“I think we forget he was only 22 when he went on HMS Beagle.

“We know he carried all round the world with him, he kept till the end of his life, letters from at least two young women.”

The police investigation around the disappearance and subsequent return of the Darwin manuscripts is ongoing.

For details on the exhibition, see www.lib.cam.ac.uk/darwin