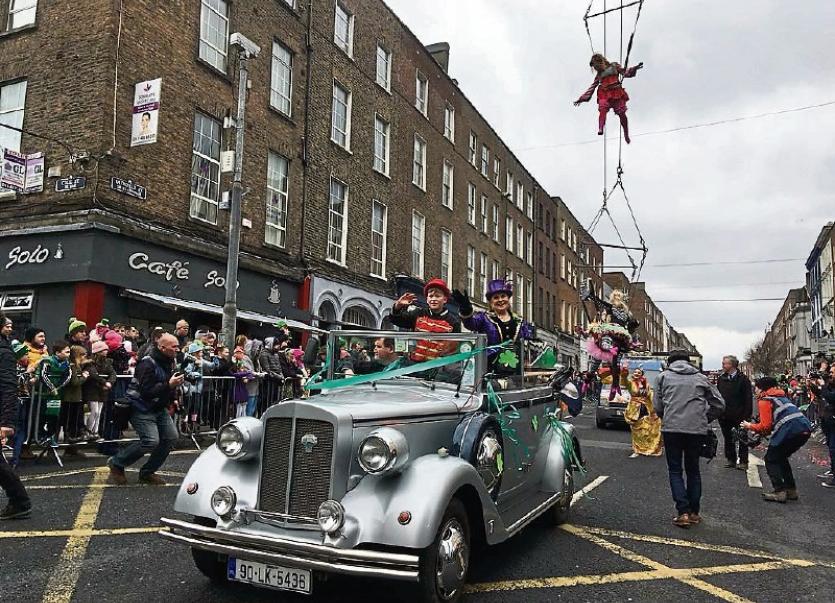 THOUSANDS of people from Limerick and beyond braced an inclement wind-chill, expecting a carnival atmosphere at this year’s St Patrick’s Day parade—and that is what they got.

This theme of this year’s festival was the circus, and to lead the the madness of it all was the legendary ringmaster of Fossett’s Circus, Marion Fossett, who was selected as this year’s Grand Marshal.

In a statement from Limerick City and County Council, gardai estimate an attendance of 75,000 at this year’s parade.

Four thousand of this population comprised of marching bands, street performers, youth groups, volunteer organisations and community associations, all of whom strutted through O’Connell Street between 12 noon and 2pm.

Complementing this year’s circus theme were a number of artistic groups that wowed the audience, young and old.

Fidget Feet Aerial Dance gyrated in mid-air, prompting many engrossed onlookers to look skywards until the Grand Marshall passed through to kick-off the lengthy motorcade.

The School of Spectacle flock to the streets #limerickstpatsfestival pic.twitter.com/Fq7iE1D2si

The School of Spectacle worked with world renowned street theatre company Walk the Plank who brought their 'Whirling Wings Circus’ to the parade.  The entry was created by 25 local and international creative practitioners over the past week and featured still walkers, who walked the entire two kilometre route.

LUXe presented their award winning “Cirque de Lune” with a highly skilled aerialist performing in a hoop suspended from their sky-hook and another performing high in the air on a Chinese pole while a third performed high above the crowd in the Empress Tower.  It was led by an exotic circus master riding wildly on his mechanical horse!

Award-winning Macnas’ entry was a nod to the early travelling sideshows.  High up her tower the ring-mistress hailed the arrival of her band of mischievous and musical minstrels and her wonderfully whacky troupe of circus sideshow performers.

And it wasn’t all about the humans—our furry friends got a chance to see the spotlight too. Limerick Suicide Watch led with a calm and composed German Shepherd, while there was a heavy canine presence from the British Bulldogs and Retired Greyhounds Ireland.

We’re getting the carnival atmosphere in Limerick! Here’s the bizarre and zany Macnas #limerickstpatsfestival pic.twitter.com/IYPuOysZxA

It’s not just for us humans! #limerickstpatsfestival is for our furry friends too! Welcome British Bulldog Association and the Retired Greyhounds! pic.twitter.com/Juupii1eyZ

Children played a significant role at this year’s parade. Not only did our young citizens get to be spectators and participants for the extravaganza, but a small cohort of youths got an opportunity to select the best acts of the afternoon.

The judging panel, made up exclusively of children, voted the Chinese Association of Ireland as the Best Overall Performance.

The Chinese Association and Limerick Youth Service proving how diverse we are as a city #limerickstpatsfestival pic.twitter.com/m5C1TOALbC

Deputy Mayor of the City and County of Limerick, Cllr Marian Hurley said:  “Today has been an amazing spectacle and a credit to the organisers. I loved the theme of Circus this year, it was inspirational.  It’s 250th anniversary of the Circus and 130 years of Fossett’s Circus.  It was just lovely, every group seemed to carry that theme right throughout the parade.  It was very colourful and the theme brought that right throughout the parade.”

“We had such wonderful artistes such as Fidget Feet and Macnas and all the other big names, we’re thrilled with our parade in Limerick.”

“I also want to pay particular thanks to the people of Limerick city and county who came out in such numbers and supported the parade despite the cold weather,” the deputy mayor added.

Grand Marshall Marion Fossett told the Leader that it was “such an hour” to lead the parade, describing the entire event as “absolutely fantastic”.

“The council was so kind because they wanted me and they brought our entire circus to the heart of Limerick city, and gave us a site in Cleeve’s car park and everybody is here together. It’s just absolutely wonderful. We are here for the whole festival weekend, so we can party with everyone else in Limerick.

“My Dad always said that Limerick was a Fossett town, and he would have been so proud of Limerick for giving us such an honour today. We were absolutely delighted to be part of the parade,” she enthused.

Being the Grand Marshall of the parade, she said, was “the icing on the cake”.

And this is just the start of a busy weekend of festivities. This Sunday at 12 noon, the 48th annual International Band Championship will march to a beat down O'Connell Street and conclude for a free jam at Arthur's Quay Park.

And to finish off the St Patrick's Day weekend, there will be explosive fireworks display at King John's Castle at 9pm.