WATCH: Gardai prepare to kick off centenary celebrations in Limerick

THE FIRST event in Limerick to commemorate the centenary of the foundation of An Garda Siochána takes place this weekend.

Between now and the end of the year, a variety of events will take place in each district across the Limerick garda division.

This includes open days, a number of exhibitions and reenactments of several key milestones from 100 years ago.

“There are national events but it’s very important that the anniversary is marked in every community and in every policing division in the country,” said Inspector Oliver Nally who is co-ordinating the programme of events in Limerick.

“It’s a very special year for us as an organisation and because of that we have put together a schedule of events commencing from now going right through to quarter four of the year,” he added.

The first event – an Antiques Roadshow type event – will take place at Istabraq Hall at City Hall from 11am this Saturday.

Insp Nally is encouraging anyone who has some garda memorabilia to bring it along to the free event where there will be experts available on the day.

“I’m sure there are a lot of people within the county and city who have memorabilia that their great-uncles or grandfathers might have had and which was stored in the attic so we wanted to put on this event for the people of Limerick so they can bring in these items and we will have a historian – Dr John Reynolds – in Istabraq Hall to give his view and input on whatever memorabilia comes in on the day,” said Insp Nally. 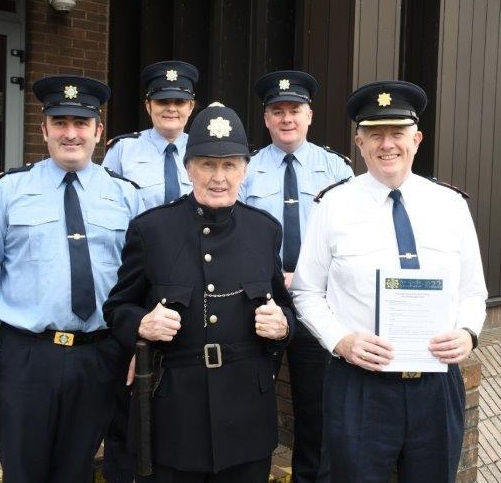 One of the highlights of the programme of events will be a concert, led by the Garda Band at St Mary’s Cathedral in the city on Friday, July 15.

While the concert will be free, capacity will be limited so it will be live-streamed online. The reenactment of the arrival of the first gardai into Newcastle West and the first court sitting in Adare will be highlights towards the end of the year.

Insp Nally is advising members of the public that demand will be high for the open night at Henry Street garda station on June 17 and that those interested in attending should email community_policing_limerick@garda.ie in advance to secure a slot.

November 18: Re-enactment of the first gardai arriving in the Newcastle West district

November 19: Re-enactment of the first court sitting at the former courthouse in Adare

Summer/Autumn: Gardai will be visiting schools across the Limerick division. A colouring competition for pupils will also take place over the coming months.