Watch: Limerick schoolboy gets ‘shivers’ of delight as Ed Sheeran gifts him his trainers

MUMS don’t want their kids getting into ‘Bad Habits’ like putting their trainers on the bed – but in this case it’s allowed!

Ten-year-old Tomás McGrath is kicking high this week after he managed to bag the runners that Ed Sheeran was jumping around in during the second of his gigs in Thomond park.

The generous youngster even gave one boot to his pal Darragh Leo, 11 – but the other yellow-and-black Nike Zoom sits proudly by his bed in the family home in the shadow of the stadium. 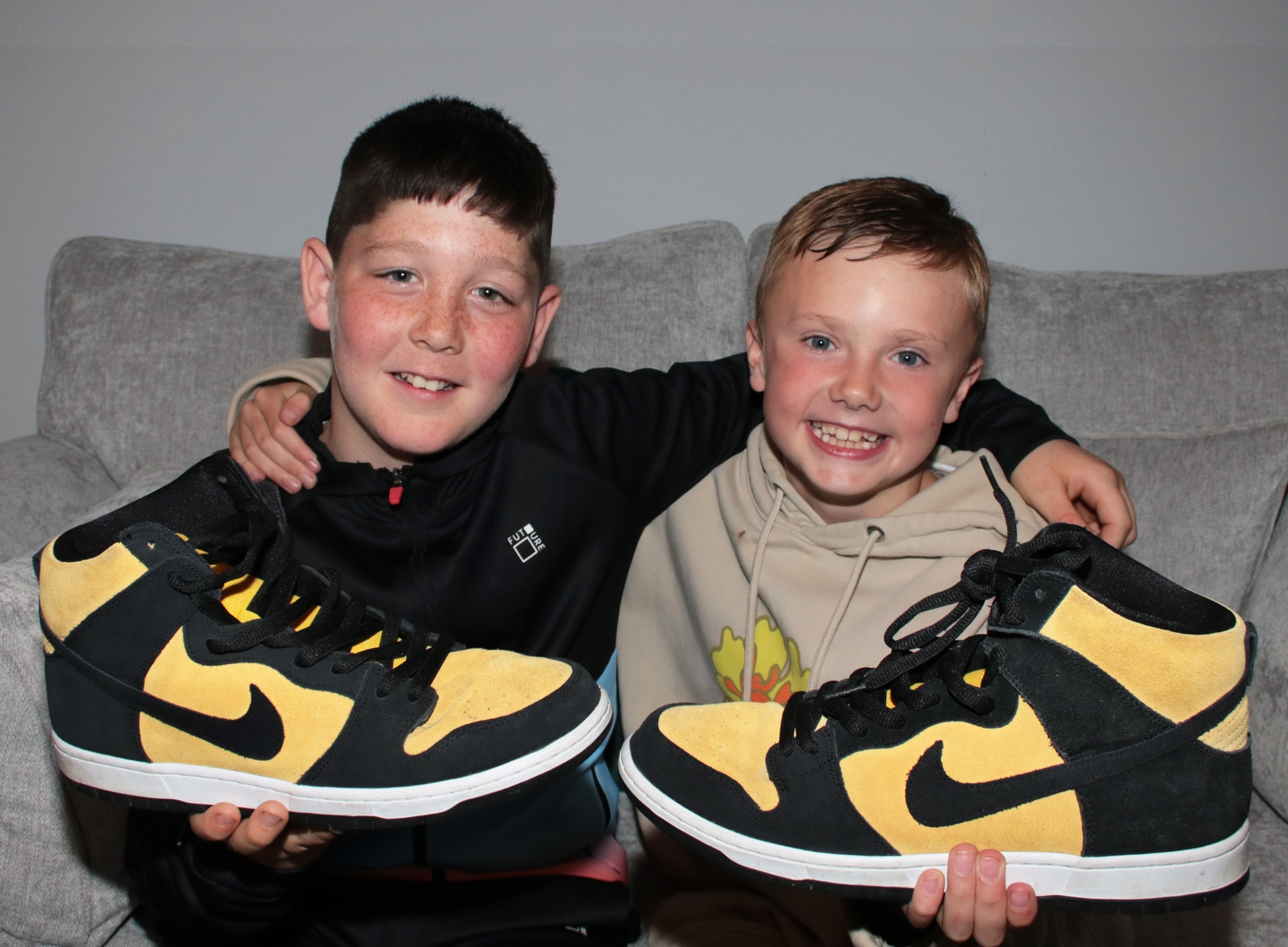 Tomás attended the first night of Ed’s concert with his father Jason and was disappointed that, due to his age, he was not allowed to stand on the pitch.

He had hoped that night to be able to get close to Ed, and ask for the trainers, which he liked the look of.

Not one to give up easily, he waited until the following night when Ed had wrapped up to take his chance to approach the superstar.

After he had finished soccer training with Ballynanty Rovers, Tomás – who declared “I stick to my word” – waited until past midnight outside Thomond Park.

Taking up the story, his mum Mary said they hung around until only Ed’s entourage were left, alongside staff of the venue.

“Tomás was asking the garda constantly, when is Ed coming out and do you think he will come out this entrance? The guard was very patient in fairness. When Ed did come out, everyone was screaming, and he took a few selfies with some of the girls. We were screaming, and he was going back into his truck. Tomás was told he could not pass the barrier, he had to leave space for Ed to pass,” she said.

“But Tomás was adamant – he was going to get those runners,” Mary added.

The plucky youngster found space in the barriers and snuck through to approach the Galway Girl singer.

And when his mum Mary shouted: “Ed, Ed, what about the kids”, it grabbed the singer’s attention. At the same time, Tomás was up by his van.

“I pushed myself in. I think he was a bit shocked,” said Tomás, a student of Thomond Primary School. “He said ‘Hi’ to me, and I asked him, ‘Can I have your shoes please?’ He said, ‘yeah, why not’.”

The kind-hearted boy divided the spoils with his friend Darragh, whose father, a huge Ed Sheeran fan, was not able to attend his Limerick shows. 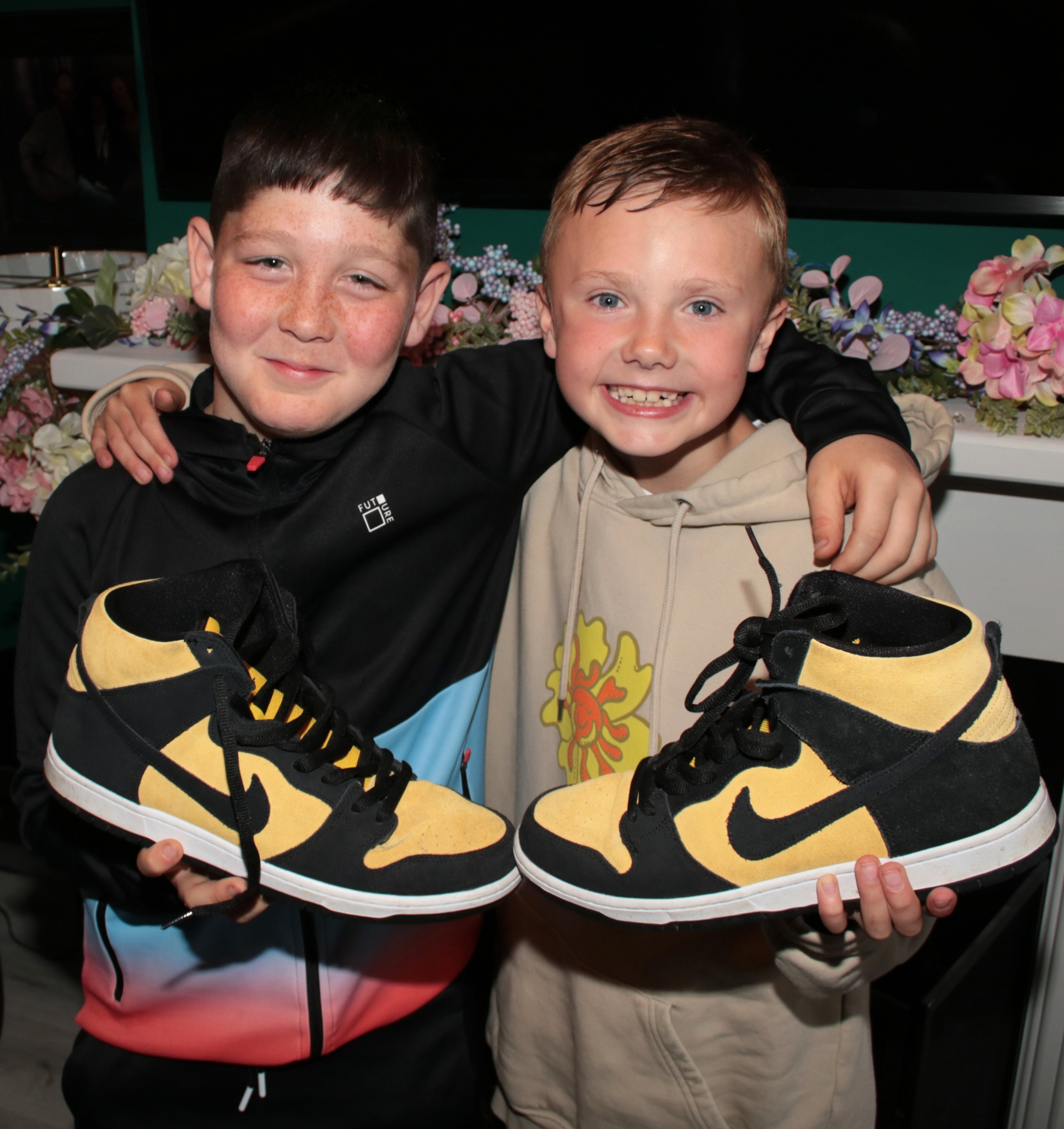 Initially, he’d given Darragh the left shoe, but then swapped it for the right.

Explaining this, Tomás said: “It’s because I am left-footed, and Darragh is right-footed”, with the pair both playing in the under-age set-up for Ballynanty Rovers.

While Ed’s shoe will sit in Tomás’ bedroom for now, his family are hoping to put the Nike runners in a glass box along with all the other memorabilia and tickets they collected following the gig.

Mary had a spare ticket for the first night of Ed Sheeran’s Mathematics Tour in Limerick, and gifted it to a neighbour from her community who was distraught at not being able to go.

“I feel my kindness has been reflected back through Tomás. The circle of life – do good, and it will come back on you,” she said.

Souvenir of a lifetime for Limerick woman courtesy of Ed Sheeran

“He was fantastic. He brought the sunshine, and he brought great happiness into these two little boys’ lives. They were so thrilled so they were!”

She also praised her son’s generosity in giving one shoe to his clubmate.

“It meant instead of one boy going home happy on the night, two boys went home happy,” she concluded.