Vote for your favourite photo in our Limerick Snapshots competition 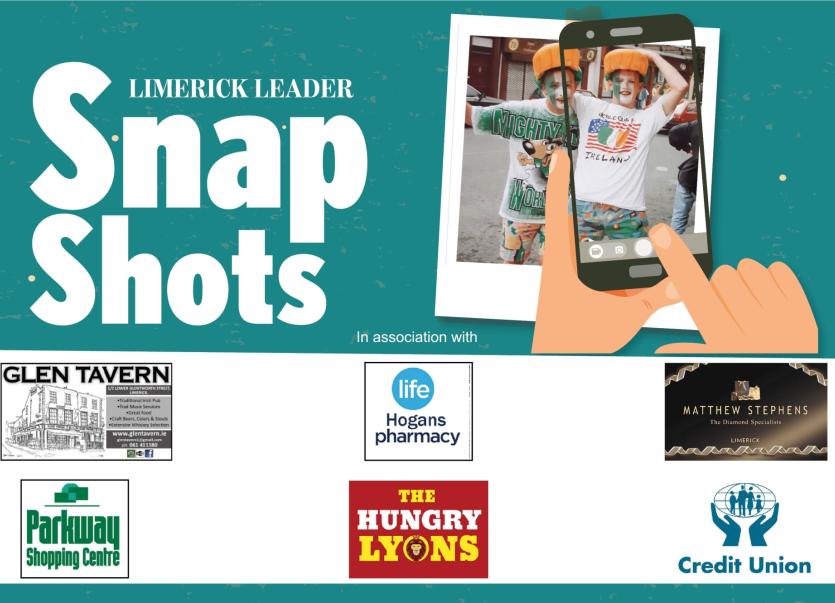 Seamus Devitt also sent in this picture: ‘Only 10 years old! In the new St Clement’s’

Seamus Devitt,  Mt St Alphonsus submitted this picture taken around 2010 of Fr Pat O’Sullivan, the  much  loved educator at St Clement’s for over 17 years. Known to many as Santa Claus for his kindly disposition towards all students

John Riordan, Abbeyfeale submitted this picture of his  dad James at the Memorial to Korean Veterans in Washington DC. His   dad along with two other sisters went to the States in their younger days. But his  dad was the only one who stayed.

Senator Ted Kennedy in Limerick and John Garrett on right of the image, on  his father's shoulders. Read John's story below

Bill Dineen and family bringing home the hay in Ballylanders in August 1954. This photo was sent in by David Dineen

Caoilfhionn O’Dwyer, Lisnagry, with her dad Senan O’Dwyer looking on, enjoying the surfing and winter sun at Lahinch beach in mid-January

Michael Walsh lands the first plane in Dineen's meadow, Ballylanders in May 1951. This image was  sent in by David Dineen

Mary  (Jones) Phelan sent us this photo. “This photo was taken at a Belgian folk dancing festival in 1971. My aunt, Nora Bennis, seated front right, ran the Bennis School of Dancing in Limerick for many years. Her husband Gerry Bennis is standing back right. Their daughter, Gráinne, is kneeling front left. And I'm the young girl in the very front.”

Kellie Ann O’Brien sent us Snapshots of her grandfather Tony and granduncle Dan Gallagher of Bishops Street. This was taken at Doonass

This photo was   sent in by Dermot Cregg, Love Lane Charleville  of the Central Hotel, Kilmallock. The hotel was owned by Patrick Lyons at the time. The man on the path behind the cart is Patrick, in the  1920s

Liam’s brother Owen (left) and himself   at a  Limerick game in the Gaelic Grounds in 2017. Read Liam's story below

We have set up a poll for you to vote for your favourite snapshots. The top two will get through to our final. Thank you to our sponsors, Matthew Stephens, The Parkway Shopping Centre, The Glen Tavern, Newman Cameras, Hungry Lyons, Chapter 13 Credit Union

I'd like to congratulate Aine Fitzgerald on her lovely piece in last week's Limerick Leader about the famous clash in 1996 between Limerick and Clare: "The point that will forever be remembered".
Back in the mid-2000s your paper carried an article of mine, a personal reflection also based on that famous occasion.
I give you a slightly edited version of my original article which I dedicate to the loving memory of my dear brother Owen who was with me on that great day back in June 1996.
In days like this shall we live forever.

THE DAY THAT I SAW A KENNEDY

Senator Edward Kennedy visited Limerick in May 1964. He passed Ballykeeffe Estate where I lived on his way to Limerick city. There he was presented with a silver tea service by Mayor Councillor Mrs Frances Condell. This was a visit made by Senator Kennedy to thank Limerick people for their messages of condolence following his brother’s, the late John F. Kennedy’s assassination just six months earlier. Senator Kennedy said that the visit “filled him with emotion and joy”.
At that time the Limerick Leader reported that “there were scenes of unbridled enthusiasm as thousands lined O’Connell Street and heard the US Senator speaking from Cruises Hotel”.
There was sadness on August 25 2009 when Senator Kennedy lost his battle with brain cancer and passed away.
President Mary McAleese said “Senator Ted Kennedy will be remembered by people in the United States as an outstanding legislator and politician who had a deep connection with the needs of ordinary people. He will be remembered here in Ireland as a hugely important friend to this country during the very difficult times”.
Senator Kennedy’s sister Eunice Kennedy Shriver who died on August 11 2009, just two weeks prior to Senator Kennedy’s passing is the founder of Special Olympics. It is a matter of great pride that Limerick plays such an active part in hosting the Special Olympics.
I have good reason for remembering Senator Kennedy’s visit to Limerick. It was a cloudy day. Crowds surrounded him and my recollection is helped to an extraordinary extent by a wonderful photograph of Senator Kennedy happily shaking hands with friends of the Kennedy family. To the right hand side of that photograph I am sitting on my father’s shoulders. What more could a boy ask for than sitting on the shoulders of a supportive father who sacrificed his own view so that I could hold a clear picture of the day. Remember, these were days when framed pictures of the Pope and the late president of the United States were mounted side by side on walls in many homes throughout Ireland, such was the respect of the Irish people for the Kennedy family.
This photograph has been in our family since that time. I believed it was taken by a Limerick Leader photographer and I made contact with Eugene Phelan in the Limerick Leader Office to see if he could identify the photographer. He was unable to find the photograph but he did send me several others to include in Be Inspired - Images and stories of Limerick's true Leaders ( Volume 2). Ireland’s link with the Kennedy family is still as strong as ever.
The Limerick Leader included the following in its report on June 6, 1964
“Limerick’s welcome to Senator Ted Kennedy will be remembered for many a long day. It exceeded all expectations when several thousand people tightly packed the streets surrounding Cruise’s Hotel and mobbed him in the most friendly manner as his car approached the entrance. It was with tremendous difficulty that he made his way into the hotel, aided by members of the gardaí who certainly did a wonderful job in their efforts to control the huge crowd. For a time the situation looked dangerous as the crowd surged forward, sweeping gardaí, newsmen and cameramen before them. And all this time the gardaí were doing their utmost to make a passageway for Senator Kennedy, members of his party, the Mayor of Limerick, Councillor Mrs Frances Condell and members of the Corporation.
The people went wild with excitement and showed their welcome in a manner that left no doubt in the minds of any that there was a special place in their hearts for the Kennedy family. They cheered and cheered while miniature flags of the United States of America were waved by almost every boy and girl in the record crowd – and there were many. To add to the occasion, a special platform was erected by the Limerick Festival of Sport Committee on which a programme of Irish music, song and dance entertained the joyful crowd”