Wild About Wildlife: The busy builders of spring 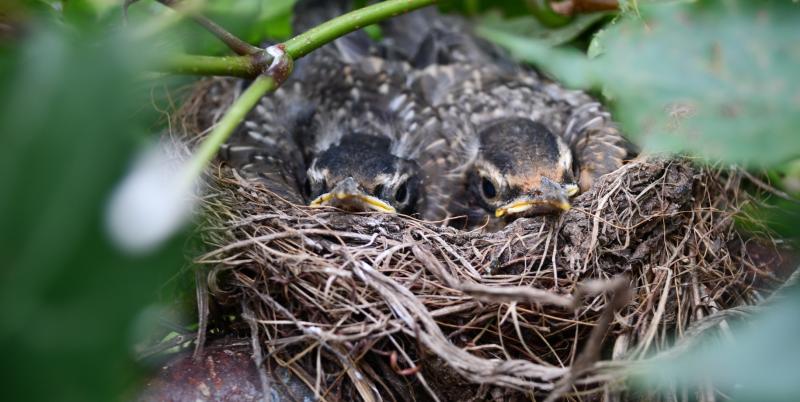 Robins do not normally use the same nest year after year, but if they have good nesting success in a place, they very often return there Picture: Pexels

THERE was a strange silence coming from the garden as I struggled out of my warm bed and onto the cold floor. The next few hours were hectic and it wasn’t until I arrived at work and got out of the car that I realised what was missing from my morning routine. .
The usual boisterous rooks were silent across the road but I could see birds coming and going. They were landing on the branches beside the nests and for rooks having a quiet amiable chats with their neighbours.
I was intrigued and checked through the small binoculars that I keep in the car and I could just make out the females sitting deep on their nests.
The nests are all finished and they are at the egg laying stage and this has brought a brief sense of calm and quiet to the rookery. The males were still busy but there was no quarrelling going on. The young rooks will be hatched just as the leaves come out on the trees. This timing is essential as they need the protection from the elements and predators like hooded crows.
As I walked down the farmyard I saw that other birds were busy putting the finished touches to their nests. They were using a small pipe under the roof of the old shed that was included in the design for ventilation. There is at least a dozen of these readymade nest boxes.
I had seen a starling the previous week inspecting the pipe. First he or perhaps she went in head first and emerged a few minutes later. Next he went in backwards and this activity continued for a while. He then flew up onto the electricity wire and started singing to alert his mate.
She arrived and commenced a close inspection of the merits of their new home. She must obviously have been happy as the male was now bringing in nesting material. The nest location has to be easily defensible and the parents could easily stand in the pipe and try and drive away any predator.
The starlings don’t have this prime site all to themselves. Their neighbourhood has become very noisy with the arrival of several pairs of housesparrows. They constantly bicker among themselves and worse when the starlings are away, they pop next door and rob some of their nesting material.
This has led to several major arguments but the starlings now leave a guard while one goes to gather material. The nearby hay shed is a popular source of material and my friend who observed the birds said they were carrying in the mattress.
I have also seen the robins gathering up loose straw and they are nesting at the back of one of the sheds. The incredible dry spell that had us basking in shorts has been tough weather for many species of birds.
Worms have gone deeper into the ground to escape the drought and this effects birds like blackbirds who feed on worms. At work when any ground was been dug over the robins appeared and were extremely friendly. In the morning like any good worker they were bang on time and waiting for their breakfast.
When a shower of rain did eventually materialize the lawns were full of hungry blackbirds. They were mainly females with wary males in attendance. The females need a high protein diet to get into good condition for egg laying.
I have also been turning on the hose and filling a natural hollow with water near the bird feeders. This is vital as birds like us will only last a few days without access to fresh water. They have also been bathing and for most birds this is a communal activity.
When they are down on the ground they are vulnerable to predators and many pairs of eyes are needed if they are to avoid been caught and eaten.