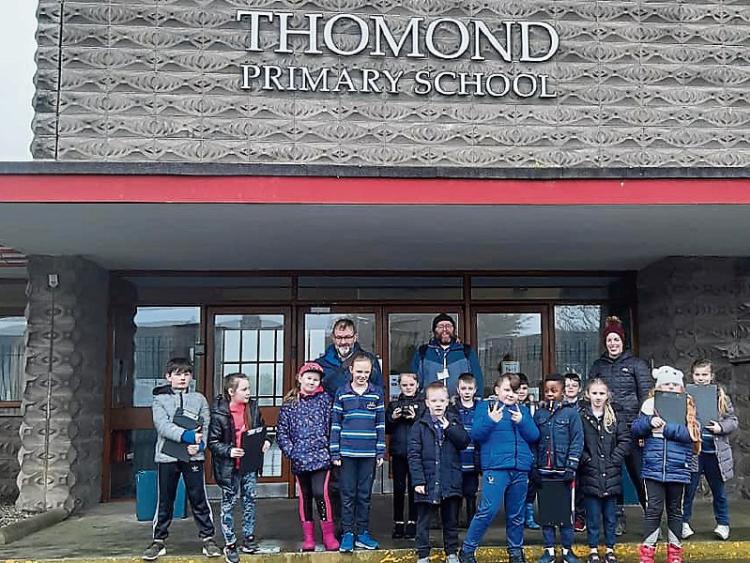 AN Taisce Living Limerick met up with the third class students from Thomond National School to carry out a litter survey around their community. I joined Sean Hartigan (co-ordinator of Living Limerick), their teacher and of course the enthusiastic students for the survey. It is brilliant to see young people been active in protecting their environment and lessons learnt recently will hopefully stay with them for the rest of their lives.

We started off with an introduction in the classroom by discussing where litter comes from, the type of litter and how it is bad for the environment. We also demonstrated how we were going to carry out the survey.

First we asked the students where litter comes from. It can come from people dumping their household waste as they don’t have a recycling bin. Also it can come from bins that are too full. We saw a few of these of our survey and the wind or animals can scatter items from the bin.

Next we discussed the impact that litter has on the wildlife. Most of the plastic ends up in our rivers where it is washed out to sea. Many sea creatures like turtles eat the plastic and can eventually die from the effects. Discarded bottles and cans become a tomb for small creatures and insects. They are drawn in by the sugary remains of the drinks and either drown or can’t make their way out. Even discarded chicken bones from a take away can choke and unwary cat or dog.

The students were then divided into teams with one person taking photographs, two spotting the litter and the last student recording on a map where the litter was located. After a quick cup of tea we headed outside to begin the survey.

We did not have to go far before we found litter. The path to the school had a lot of chewing gum. This is not only unsightly it gets stuck to the shoes of people and creates a mess in buildings. Birds can also eat gum and this sticks in their throat and stomachs.

One of plastic was also common showing the urgent need to reduce the amount we use and the availability in shops. The students also recorded plastic bottles near an overflowing recycling bin.

Dog poop was found in a few places despite a sign warning of a €4,000 fine if prosecuted for the offence. Doug fouling is also a health risk with young children walking up and down the road to school every day.

There was also time for a little bird watching. We spotted a starling on the electricity wires and listened to its song. It is also interesting to discover new community projects and we did not realize that there was allotments just up from the school. This was be another great link with the school and hopefully that can be facilitated.

After a short walk we reached Thomond field and started to record litter. There was lots of broken glass and this is so dangerous for animals and people. The students were really diligent and soon had their recording sheets nearly filled in.

Our last stop was at Thomondgate nature project. This area is been developed into a wildlife habitat and with five schools in the community this has great potential for becoming an outdoor classroom. The class has great ideas for encouraging nature from putting up bug hotels, nest boxes and planting trees and flowers.

Well done to Thomond NS for their time and interesting in protecting the natural world.