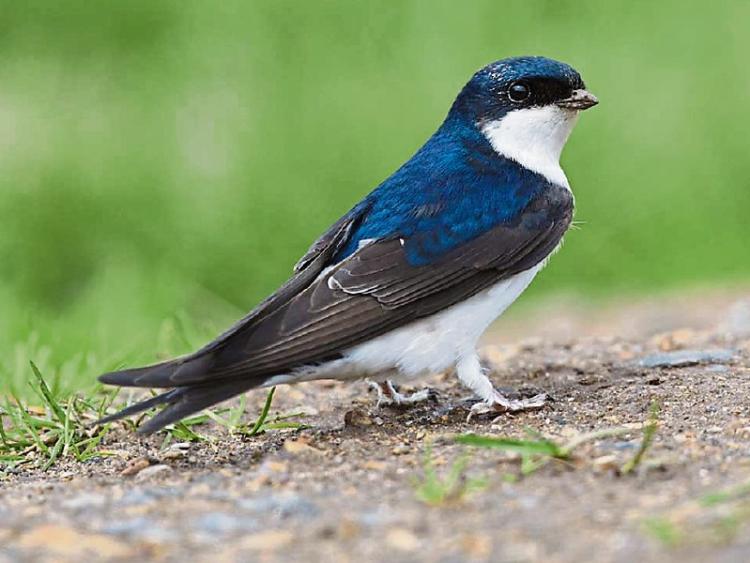 House martins feed at a higher altitude than swallows, so the two species do not compete with each other

AS the first week of school thankfully comes to a close there are a brief few days to draw breath after a hectic week. My daughter Lucy started secondary school with all the changes and challenges awaiting; while my son Harry matured into sixth class.

While their heads were in books mine was in plants. I was standing out the front of the house and enjoying pottering around the tubs and containers. I was getting ready to sow daffodil bulbs and gardeners like parents are always planning ahead.

I heard birds calling and looked up to see a large flock of house martins that were circling above the house. These are common visitors from Africa and build their mud nests under the eaves of houses in the middle of towns and cities to the most isolated rural household.

On a recent walk we watched as house martins perched on the sunny roof of a school. I was asked the question of how do you tell the difference between swallows and house martins?

House martins have a short forked tail that resembles the letter of their name M. They also have a very conspicuous white rump (lower back), and this is easily seen, when the bird is flying.

The house martins were chattering away and they will soon be departing for distant shores. It remains a mystery to me what is the signal for them to commence their journey. One day they are here and the next they are gone. Like the swallows it is usually a few days before I notice their absence. They usually travel at night and this helps them avoid predators and the cooler temperatures helps to conserve energy.

On closer inspection the flock consisted of little groups of birds. They were flying close to each other and touched every so often. When the young house martins fledge for their mud homes they are fed by their parents for a few weeks.

This is a vital time for migrant birds as they need to build up enough fat reserves for the arduous journey back to Africa. Flying insects especially flies and aphids are a major part of their diet. The 100,000 odd pairs that breed in Ireland each summer eat thousands of tonnes of insects and this is an unnoticed but vital ecological service.

I remember a neighbour of mine who lived near Tipperary town who in her own words, “was getting sick of the mess around her house”, from the nesting house martins. My polite suggestion that they have come all the way from Africa to spend the summer with her fell on deaf ears. She asked could they move over to my house where they would be very welcome.

Despite my best efforts I could not entice them to leave their adopted home and I explained to the irate lady that I have yet to master the subtleties of bird language and behaviour. She also tried hanging CDs, and string from the eaves but the clever birds simple flew between the gaps.

Eventually she took to knocking the nests as soon as they started to construct them. All summer long battle raged. As one nest was destroyed another would gain a foothold while she nursed her aching limbs in the morning.

I met her one day and she started to complain about the flies that were now bothering her while she entertained in the garden.

I was tempted to mention the best fly control service she was trying to get rid of but some lessons in nature and life need to come to us of their own accord.

I hope in Africa they are more welcome and I look forward to their return just as the kids are getting ready for their summer holidays.