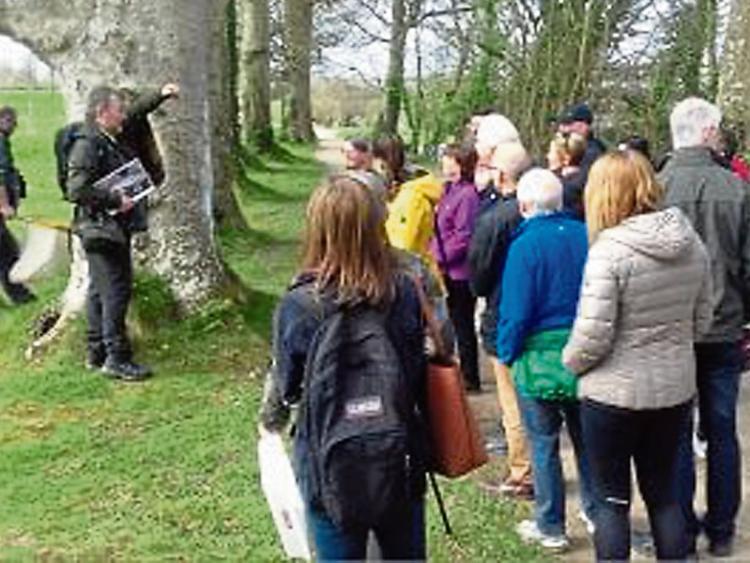 Learning about nature at UL

THE sun was shining, and the campus of the University of Limerick was a hive of activity. This week I was joining Sean Hartigan, Green Party candidate for Limerick City East, in the upcoming local elections - Sean had been invited by the UL Environmental Society, to lead a nature walk, to discover and raise awareness of the wildlife in UL.

On the day we were also joined by Kevin, and Maura from Limerick Birdwatch and Pat Murphy from Thomondgate Nature Walk was also there, with his granddaughter that shares his love for nature.

Student life is a busy one, and the walk had to be fitted into an hour for lunch. It was brilliant to see so many students, who are interested, not only in their academic development, but also in wildlife. Some of them had been at the weekend’s clean-up of plastic, along the riverbank in Westfields Wetlands. This had been organised locally by Living Limerick, and Sean also showed people, the aquatic life found in the water. It is important to see actions, as well as words, when it comes to protecting the environment.

Sean welcomed everyone, and started by recounting his university days. Many of these were spent fishing, and he remember leaving his rod, at the door, before going in to do an examination. Sean showed us photographs, off all the different species of fish, found in the river and he gave his opinion on how they tasted. Sean is passionate about developing the River Shannon and its walkways, to their full potential, for tourism and wildlife.

Also Sean pointed out the different flowers, birds and insects. On a grassy bank we found cowslips growing. Like so many wildflowers, these have become rare in the wider countryside, and the wider landscape needs to be made for friendly for wildlife.

Many birds have also taken to university life, and we saw a pair of collared doves, and a pied wagtail nesting in the walls of a low bridge. Beautifully coloured goldfinches charmed the whole group, as they fed on the insects in the birch trees.

Next we walked along, beneath the tall trees, bordering the river, and life was all around us. The raucous calls of the nesting rooks echoed along the path. We paused to admire a massive sweet chestnut tree. Sean who works with LEAF, and brings schools out to Curraghchase Forest Park, to learn about the importance of forests, thinks it must be at least 200 years old.

He also revealed the fascinating story of nature’s smaller creatures. On the compacted soil, of an upturned tree, solitary bees had made their tunnels. One even crawled out onto my finger. One lady commented that she thought that she knew this walk very well, but her eyes have now been opened, to the wonders of nature. Wildlife needs voices like Sean’s that help us reconnect with the natural world, as awareness is vital for any conservation project.

In the older beech trees that have been hollowed out, by the actions of fungi and old age, we discovered signs of bats.

More of the campus is be designated for nature, and this is through the National Pollinator plan. Many species of bees and insects are declining, and we urgently need political and community actions and participation, to conserve and protect pollinators. The university is in the process of signing up to the pollinator plan.

Plea for missing camera: Pat Murphy from Thomondgate Nature project, a talented wildlife photographer, camera disappeared on one of his recent trips to Curraghchase Forest Park. Pat is appealing for its safe return and if anyone has any information please contact Pat at 087 9565907.

Limerick U3A Group (University of the Third Age - Lifelong Learning for older adults) group meet on the second Wednesday of each month in the Granary Library. Join them on Wednesday, April 10 at 2.30pm for an afternoon workshop with Sarah Ryan, horticulturalist with the Urban Co-Op. She will be showing us simple ways to get the most out of our outdoor spaces while also giving back to the planet. Bring gloves as we will be starting some seeds. Contact Joan Conran, PRO U3A Limerick at 087 9330067.