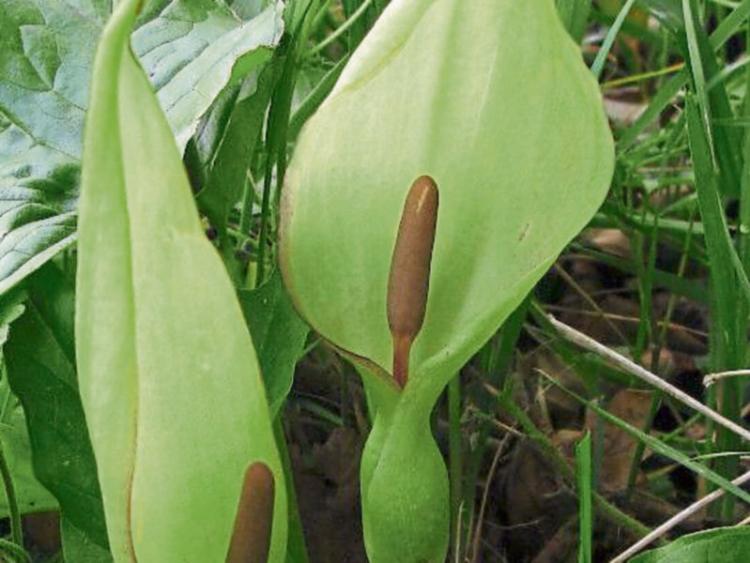 Stay away: The flowers of the cuckoo-pint are poisonous

THE clatter of bottles being sorted into bins shows that pub life never really ends, and work continues long after we have supped up and left.

I was up early and had been counting the number of nests in a rookery in trees beside a pub. It was a good size, with over 60 nests and more to be added in coming days.

The owner of the pub appeared, and fortunately I had met her before. Many of her customers had been giving out about the spring noise of the nesting rooks. A few had complained about the mess on their cars, but she handed them a pint and peace is soon restored.

It is rare to meet a business with such an enlightened attitude towards rooks. She pointed out that American tourists are a big part of her trade. They love to sit outside on a sunny day and enjoy the sounds of Irish nature. In their cities and towns, they don’t have the same birdlife. We departed with the promise of a drink on another day.

I stayed to explore a tall hedgerow that was retained, behind a low wall, when the car park was added. I spent a few minuets discovering its bird and plant life. Elder is the dominant tree here and they were well over four meters high. Elder is very short lived in tree terms. It has a comparable life span to humans and most are on their last legs by 80. The leaves can appear during a mild January, followed by the creamy white flowers. The hanging bunches of fruit are eaten by a wide variety of birds.

Cow parsley’s feathery leaves were well established and will soon be turning roadside hedgerows white with their flowers. This is a great plant for insects and good shelter for young rabbits, as they graze on roadside grasses.

An unusual find was some white bluebells. The pub keeps a beautiful garden, with a wide selection of plants and flowers. Bluebells are also a good source of pollen and nectar for early pollinators. Last year’s garden prunings are also slowly decaying creating a mini bug hotel for countless creatures.

I carefully searched the fresh leaves of nettles, but no butterfly has yet laid her eggs; the location might be a bit shaded.

Next I discovered one of my favourite flowers of the spring. The long pointed leaves of the lords and ladies, or the cuckoo-pint were out. Its common name comes from its appearance each year at the same time as the cuckoo bird. It is a member of the lily family and shares that plant’s need for damp places to thrive under trees.

My mam, who is very knowledgeable about flowers and nature used to tell us when she was on her way to school, they used to collect these flowers. They look like pencils, and you write on your hand. She didn’t realise the flowers are poisonous. These are pollinated by small flies and the plant does have an unpleasant smell. Bright red berries ripen in late summer, and despite their attractive appearance, they are also poisonous.

Just as I was about to leave, a tiny wren landed on the branch of the elder tree. It cocked up its tail and gave a powerful song. I had heard him singing earlier, and there must be a nest nearby. We both stood still for a few moments, before he flew away. I always marvel at how easily birds move through the tangle of branches and brambles of a hedgerow.