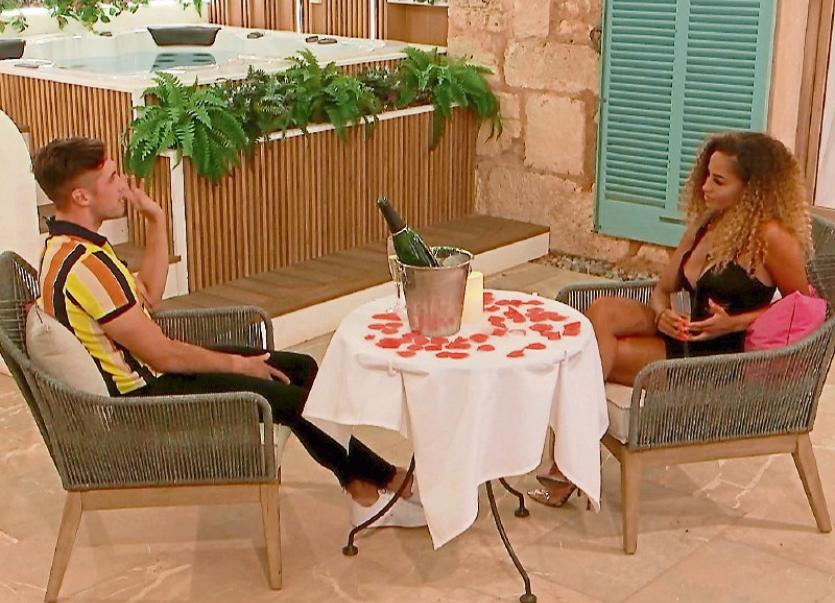 New boy Greg from Limerick has just chosen Amber to join him on the Hideaway terrace for a date. Amber arrives in the Hideaway and meets Greg for the first time.

Speaking of his decision to choose Amber for a date, Greg says “I just thought you deserved a date after all the drama that’s been happening. You deserve to be spoilt a bit.”

Amber replies “It’s been hard. But I’ve come out the other end and I feel happier.”

Amber is keen to know what Greg is looking for in a girl. Greg says “I’m looking for confidence. You’re obviously very confident.”

Greg replies “There is a first time for everything.”

Amber and Greg continue to get to know each other. But Amber wants to know whether Greg only has eyes for her. Amber says “Is there anyone else you’re interested in, in the villa?”

Greg jokingly says “Anyone else? So, you’re saying I’m interested in you?”

Amber says “You’ve picked us for a date, so I’d like to think so!”

As the date draws to a close, Amber and Greg return to the villa. Amber fills some of her fellow Islanders in on her date with Greg. Amber says “His accent is fabulous. And he can take the banter.”

Before the Islanders head to bed, Amber says to the girls “I’m telling you now, I haven’t liked one boy that has come in. That boy has got the luck of the Irish!”

But is Greg only interested in getting to know Amber? Or does he have his eye on another girl in the villa?

GREG, HARLEY AND INDIA ARRIVE IN THE VILLA, AND CHOOSE THREE MORE ISLANDERS FOR DATES

After their dates with Ovie and Chris, Harley and India arrive at the villa and meet the rest of the Islanders for the first time.

Chris and Ovie have a debrief with the other boys about their dates with the new girls. Chris is evidently blown away by India, however he may have some competition as Ovie confesses he has eyes for the newbie as well.

Equally, India has taken a fancy to Ovie. Speaking with the girls by the fire pit, India says “Ovie is gorgeous. Ovie would normally be my type.”

After his date with Amber, Greg arrives at the villa and meets the Islanders for the first time. Some of the boys are keen to know what Greg thinks of Amber.

Greg says “She’s [Amber] gorgeous. I didn’t realise how good looking she was.”

The next day, India receives a text, which reads “Greg, Harley and India. Welcome to your first morning in the villa. You must now pick one person each to date this morning. Please pick the person you want to date and head out into the garden. #theearlybirdcatchestheworm”

Maura reflects in the Beach Hut on Greg’s decision to take her on a date. She says “It’s kind of good in a way because Curtis might get a bit jealous! I’m glad none of the girls are taking Curtis on a date.”

The six Islanders head outside for their breakfast dates. And Ovie wants to know why India decided to choose him for some one-on-one time.

Ovie says “I’m glad you picked me. You came to save the day!”

But after dating Chris and Ovie, who will India be pursuing a romantic connection with?

Over at Harley and Michael’s date, Harley says “You’re the type of person I can see myself getting on really well with. And obviously, you’re not bad looking!”

Michael says “It’s nice to be asked on a date by a very pretty girl. It doesn’t happen every day.”

Conversation soon shifts to Michael’s job as a firefighter. Harley asks “Have you got a uniform?”

Could Michael be Harley’s hero?

Meanwhile, Maura is getting to know Greg over at their date. The pair talk about Maura and Curtis’ blossoming relationship.

Greg asks “Could you see at any stage his head being turned again?”

Maura replies “Anything could happen. I’d hope it wouldn’t but I can’t really call it.”

IS MICHAEL HAVING SECOND THOUGHTS ABOUT AMBER?

After Joanna was dumped from the Island, Michael was left single and contemplating his future in the villa. Regardless, he has been adamant that he no longer has feelings for Amber. However, it looks as if he could be having a change of heart.

Speaking with Ovie by the pool, Michael lets on that he may still have feelings for Amber.

Later that evening, Michael speaks with the boys at the fire pit. Michael says “Now that Joanna has gone, it has given me time to think about things. I’m not saying I don’t like Joanna, because I do. But I feel like because Joanna was there I actively avoided Amber.”

Jordan says “I think if you did go back there, things would be so different.”

Is Michael having second thoughts about Amber?