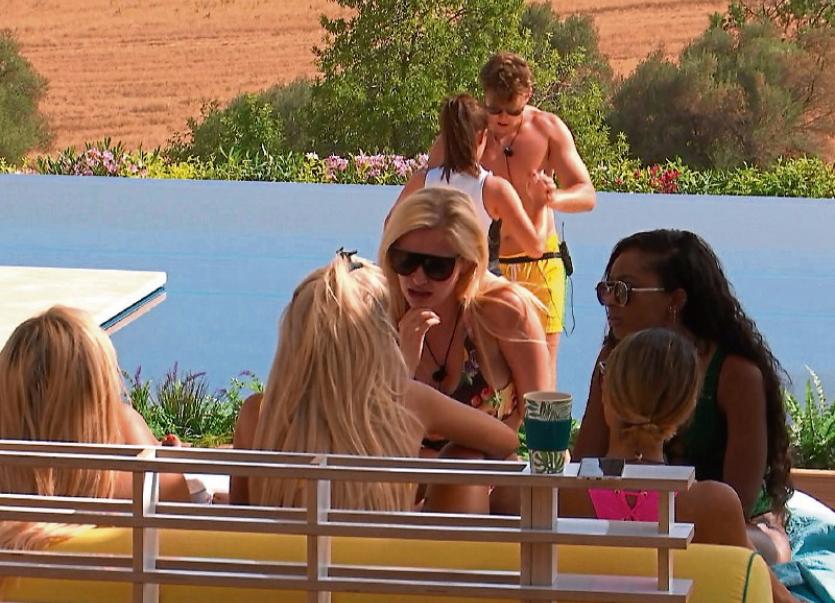 They could hardly fail to notice after the dancing, could they?

After speaking with Curtis about how she feels, Maura decides to tell some of the other girls about her conversation with Curtis. Speaking with Anna, Molly-Mae and Lucie on the bean bags, Maura says “I told Curtis I had feelings for him.”

Maura explains that she has had feelings for Curtis since she arrived in the villa, but didn’t want to express how she felt as Curtis and Amy had a strong romantic connection.

Anna and Molly-Mae are taken aback by Maura’s confession. Anna says “Do you not think you should have told Amy?”

Anna reinforces her point that Maura should have spoken with Amy. Lucie interjects and explains this is a similar situation to when she told Tommy she had feelings for him.

Maura decides it is time to tell Amy about her conversation with Curtis.

Maura says to Amy “From day one, I said that he [Curtis] would have been one of the guys I would have gone for. I do fancy him. I’m an honest person, I can’t hold back, so I did tell him that I liked him.”

Amy says “But not honest enough to come and tell me first that you were going to do it?”

Maura says “When I came in here, I felt that out of all the girls here, you were the one that wouldn’t let me in.”

Amy says “A lot of stuff makes sense to me now. You were one of the most vocal that he didn’t deserve a second chance.”

Maura says “If you honestly think that I’ve done that to swoop in, you’re very wrong.”

But is Curtis interested in getting to know Maura in a romantic way?

It’s Anna’s 29th birthday and to celebrate, the Islanders throw her a party.

Anna is blown away by the effort her fellow Islanders have made. In the Beach Hut, she says “It touched my heart. It made me feel so special. I felt like the luckiest girl, ever!”

Jordan gives a speech for Anna’s birthday. He says “Huge happy birthday to Anna. Also, we can officially say that she is a cougar now!” The Islanders roar with laugher and toast to Anna.

Also, Amy and Molly-Mae write a song for Anna. They sing “Our girl today is 29 and we must say she looks way fine. Anna is clever, wise and strong, she’s always there when something goes wrong. Jordan says he loves her toes; will he suck them? No one knows! This song is going on without further ado, all that is left to say is happy birthday to you.”

The Islanders celebrate until Maura receives a text, which reads “Can all Islanders gather at the fire pit immediately.”

It is revealed to the Islanders that the public have been voting for their favourite couple. The three couples with the fewest votes are revealed and are told they are at risk of being dumped from the Island. As Amber and Jordan are single, they were exempt from this vote and dumping.

The three couples are revealed and they then stand in front of the fire pit. The couple who received the least votes from the public is announced and are dumped from the Island.

However, just as the remaining two couples thought they were safe, Tommy receives a text. The text says “One more couple will be dumped, the other couple will remain in the villa. The couple which stays and couple that is dumped will be decided by your fellow Islanders.”

But who will be dumped from the Island?

ANTON AND BELLE GET CHEESY ON THEIR FIRST DATE

Since Belle arrived at the villa, her and Anton have been getting closer by the day. Now, it is time for their first date.

Anton receives a text “Anton and Belle. It’s time for your first date. Please get ready to leave the villa. #milkit #saycheese”.

Belle has a feeling what they’ll be getting up to on their date and is excited at the prospect of making their very own cheese.

Anton and Belle arrive at their date to find out they’ll be making goats cheese. Firstly, Anton is vested with the responsibility of extracting the goat’s milk. Anton and Belle laugh as Anton milks one of the goats.

The pair then start making the cheese. Anton compares their current situation to Patrick Swayze and Demi Moore’s iconic pottery scene from the film ‘Ghost’. Anton is keen to recreate the moment. He stands behind Belle and helps her make the cheese.

But it appears this is too cheesy even for Belle. She says to Anton “There is nothing sexy about this at all.”

Anton says “Is this not doing anything for you?”

Belle says “This is doing no bits for me.”

Shortly after, Anton and Belle head to a nearby courtyard to sit down and enjoy a drink.

Anton remarks that he’ll have to take Belle to Scotland as she has never been before.

Belle says “My favourite drink is Irn-Bru, so I’m sure I’ll like it.”

Anton is keen to hear more about Belle’s family.

Belle says “My Mum is in beauty and my Dad is an actor. He’s in a lot of British gangster films.”

Belle then asks “Do you think it would work on the outside?”

Anton replies “I really like the way things are going. I can’t see myself getting on with someone the way I get on with you.”

Belle says “I do think you are what I’m looking for.”

Is romance on the cards for Anton and Belle?

TOMMY ASKS MOLLY-MAE TO BE HIS GIRLFRIEND

Things have undoubtedly been going well between Tommy and Molly-Mae, and Tommy is now ready to take their relationship to the next level.

Speaking with Curtis on the day beds, Tommy says “I feel like now is the perfect time to call Molly my girlfriend. I feel it!”

Curtis writes a message in eye liner for Tommy to give to Molly-Mae and then attaches the message to Ellie-Belly before placing him on the terrace seat.

Tommy reflects in the Beach Hut on his upcoming plan of action. He says “Asking Molly-Mae to be my girlfriend was single-handedly the most nervous I’ve ever been in my entire life.”

Tommy then asks Molly-Mae for a chat. He says “Ellie-Belly wants to tell you something. He told me to come and get his Mum.”

Molly-Mae reads the note attached to Ellie-Belly, which says “Dear Mummy. Daddy left me here in his best interests. He wanted me to tell you that you’re his everything. I’m going to leave it with Daddy. So…”

Tommy then says to Molly-Mae “On a serious note, you know how much you mean to me and you’re the only girl for me. I only want to be with you. Therefore, I was wondering if you wanted to be my girlfriend?”

Will everything go to plan for Tommy?