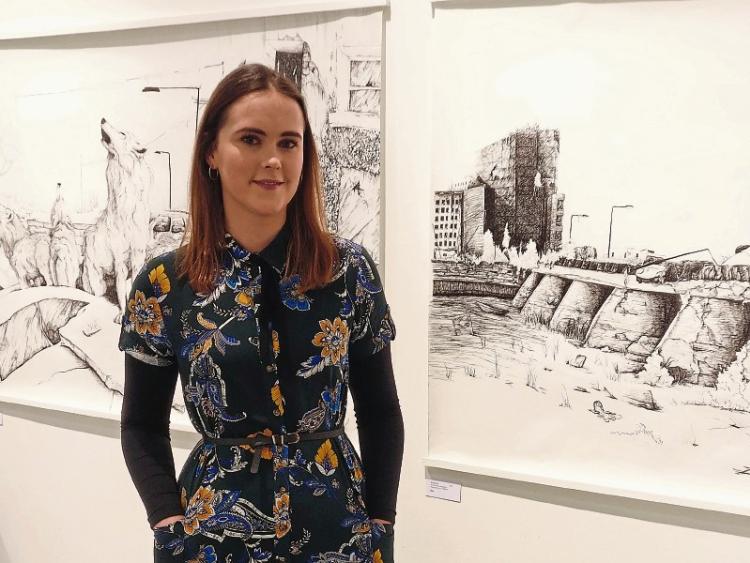 Helena Grimes’ exhibition continues at the Belltable until October 20

HELENA Grimes’ pen and ink drawings and prints have a captivating quality that appeals both to children and to adults.

And Limerick people of all ages still have a chance to see her work for themselves as her exhibition Anthology will run until October 20 in the Belltable.

The exhibition is part of the Bualadh Bos Children’s Festival, providing Helena with another opportunity to exhibit her work in the city she has adopted and lived in for the past eight years. “The Belltable approached me,” Helena said this week, explaining how the exhibition came about. “I had a solo show there last year and they thought it would be suitable, given my illustrative style, and that children would respond well to it.”

What intrigues Helena is that children see her work “completely differently” than adults.

“It is all heavily influenced by fables,” Helena says of her work. Aesop’s Fables are a particular favourite but the myths and legends of lots of different countries all appeal.

Her work is also influenced by nature and the world she sees around her. But ultimately, she explains: “They are all about people and society, things that have gone on in my life, stories I might have read.” And the timeless themes of grief, anxiety, power and regeneration find expression.

The animals she draws come alive as characters: they reflect personalities, they often represent character traits or situations.

And they are all done in detailed, painstaking pen and ink. Drawing has always been Helena’s consuming passion, ever since she was a small girl growing up in Longford. It was her way of making sense of the world and making that world her own.

“I call it “my little weapon”,” she says of the archival fine-tip pen she uses to draw. Much of her work is in stark black and white, but she often uses water colours or more recently, ink wash in bold amounts of black.

A graduate of Limerick College of Art and Design, she has already exhibited widely in the US, Egypt, Turkey, Spain, the Netherlands and the UK and has undertaken private commissions. She is particularly proud of a commission she completed for the University of Limerick, entitled Every Forest Has A Dark Soul.

But Helena is also an illustrator and printmaker and has done a lot of commercial illustrations, including some book illustrations.

One of her many goals as an artist is to produce her own book for children. Whether that book is one she will write herself or in collaboration with someone else remains to be seen. But the illustrations will definitely be done by her.

She also creates prints of some of her work, making it available to a wider audience at a more affordable price. Prices at the Anthology exhibition start from €50.