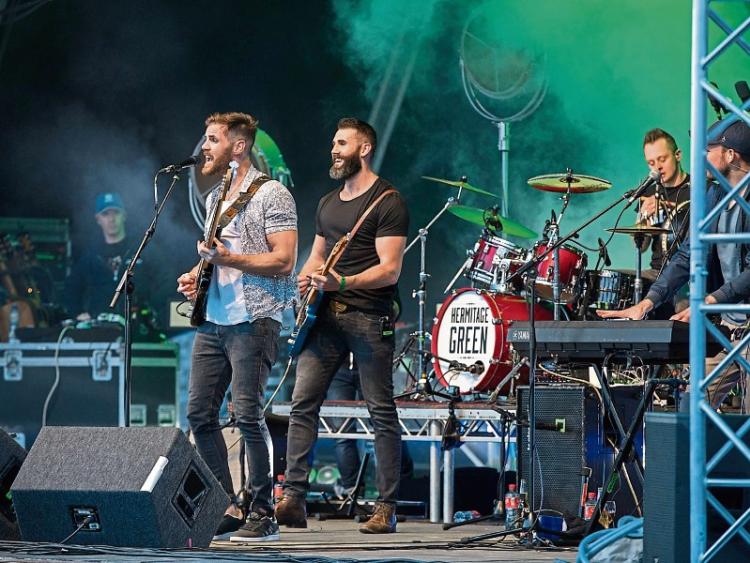 Hermitage Green return to King John’s Castle for a show on Sunday, June 3

HERMITAGE Green are on countdown to their second appearance at King John’s Castle this June, a venue they have hailed as “incredible”.

For the hometown group, it is particularly satisfying to be returning to a venue that they sold out last summer and are likely to do so again, with bookers Dolan’s reporting that the June 3 gig, held in association with Shannon Heritage, “is expected to be a sell-out”.

Having conquered the Big Top at the Milk Market, the Castle was the next rung on a ladder that Hermitage Green are quickly scaling and they seem at home among a bill of shows that has included Bell X1 and will also feature top Irish group Walking on Cars.

Barry Murphy of Hermitage Green says: “King John’s Castle is an incredible venue, easily one of the finest this country has to offer and we are counting the days until the show”, adding that the band would “never forget the feeling of walking out on that stage and looking up at the castle walls against a backdrop of the river Shannon and Limerick city” last year.

Dolan’s said “feedback from the public was for round two” and the venue has consistently backed the group since their early days plugging away on the pub scene, mostly in the Curragower Bar, which lies just across the water from King John's Castle.

“As a venue, King John’s Castle, is proving to be extremely popular for music lovers. We are delighted to be welcoming Hermitage Green back to the stage with what is sure to be another incredible gig,” said Mick Dolan.

“Dolan’s have been proud to have been associated with Hermitage Green since their early days. Their growth and development as a band has been inspirational to watch,” he added.

A trio of acts will play support at Sunday's show, with a local lineup of Nile St James, Shane Davis and Siomha Brock all playing at the Castle.

“This is our hometown gig and we want to showcase some of our favorite local acts. This is gonna be some party lads,” Hermitage Green said.