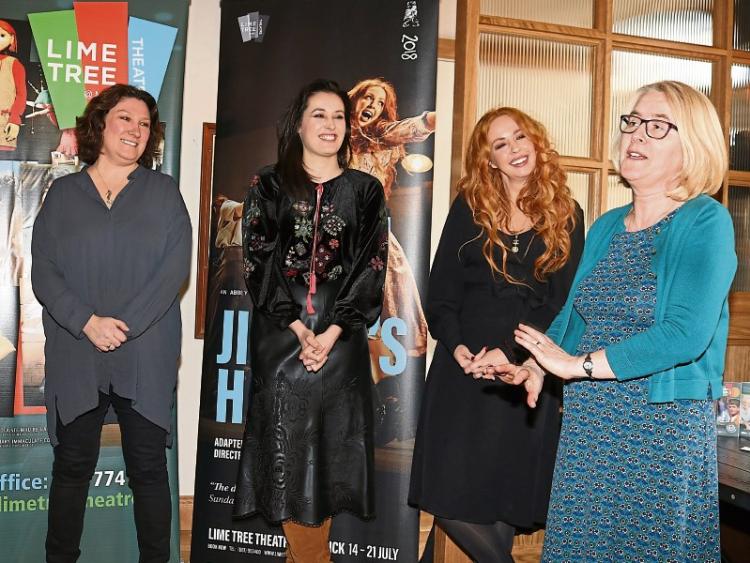 Louise Donlon of the Lime Tree speaking at the launch of the Abbey Theatre’s tour of Jimmy’s Hall, with producer Sarah Lynch and cast members Sarah Madigan and Lisa Lambe Picture: Adrian Butler

JIMMY’S Hall, a “beautiful show that speaks to the heart” will open a new national tour for the Abbey Theatre at Limerick's Lime Tree Theatre this summer.

The show, telling the true story of Leitrim farmer Jimmy Gralton, the only Irishman deported from his own country, opens at the Lime Tree on July 14 for a week before it goes on tour around the country.

Securing the Abbey’s tour opener is a coup for the Lime Tree, which had the national theatre open the 510-seater venue in October 2012 with Plough and the Stars. Speaking at the launch this week, theatre boss Louise Donlon said it would be “the highlight of our year” to have the Abbey back for a fourth stint in Limerick.

Ms Donlon said there was “great excitement” ahead of the opening of Jimmy’s Hall and said bringing the Abbey to Limerick “was what it is all about in presenting the very best work possible” at the Lime Tree.

The play, in which Jimmy takes on the establishment via his dancehall, was a roaring success on its opening, bursting with song and music, dancing and plenty of real life trials of the heart.

Sarah Lynch, who hails from Caherdavin and is now the Abbey’s touring producer, said it was “pure entertainment”.

“It is the story of Jimmy, who wanted to do his dancing and play music. We told his story and had a fantastic reaction when we performed it last time around. It has been one of the things people have been asking us, if we are going to bring it back,” she explained.

“It is a really great combination - it is our history, it is very recent and you can go as deeply as you want into the political aspects, but it is great fun. We have a cast that is super talented and it ticks all the boxes.

“The voice and harmonies are superb, the music is amazing, and it is a bloody good story, so you really do tick all the boxes. When we opened it, people were dancing in the aisles - and crying,” she laughed.

Sarah Madigan, who plays the role of Marie and whose family hails from Limerick - including her grandmother, who lives in Monaleen - said “people can definitely expect a lot of music, a lot of dancing, there will be tears, there will be laughter.

“We have the most incredible cast and it is a beautiful show that just speaks to the heart and you will have a great night as well,” said Sarah, who has family also living in Castleconnell.

Lisa Lambe, who plays Oonagh said Jimmy’s Hall was “a lively, beautiful show, it is a great night out”.

“The story is amazing, but it is enhanced so greatly by the music, which will make you laugh, cry and transport you,” she added.