Bread not Profits is latest project for the scribe, who is looking back into history once again Mike Finn outside the Belltable, where he presents a work-in-progress’ reading of Bread Not Profits on December 14 Picture: Adrian Butler

PIGTOWN playwright Mike Finn is turning his gaze back to a period of Limerick history when the city was “fizzing with energy” for his next project.

The scribe, who is completing a year as theatre artist in residence at the Belltable, is looking to the Limerick Soviet in 1919 as the inspiration for his next work, entitled Bread Not Profits.

The tumultuous events of 1919 when workers took over the city for 10 days, organising food and fuel distribution, printing their own newspaper and, uniquely, issuing their own currency, would appear to make for a natural fit for Finn, who has already examined the period in the award-winning promenade piece Pigtown, and 2014’s On the Wire, which looked at soldiers coming home from the war and he helped to devise.

Bread Not Profits feels like a fitting conclusion to that trilogy.

“We are talking about the same kind of area. I am a sucker for history and tend to go backwards to find inspiration, because I like history and also, to be quite frank about it, I am not very good at plot,” he laughs. “I am good at dialogue and gags and can do character ok, but I can’t really think up my own stories - which is kind of a flaw when you are a writer, a slight Achilles heel perhaps.

“So what I have managed to do is go back into the past and find stories that already exist so I can adapt it - it has a beginning, a middle and an end, I can take it and mould it to my ways. So it is partly out of a flaw in my abilities, but also an interest in history.” 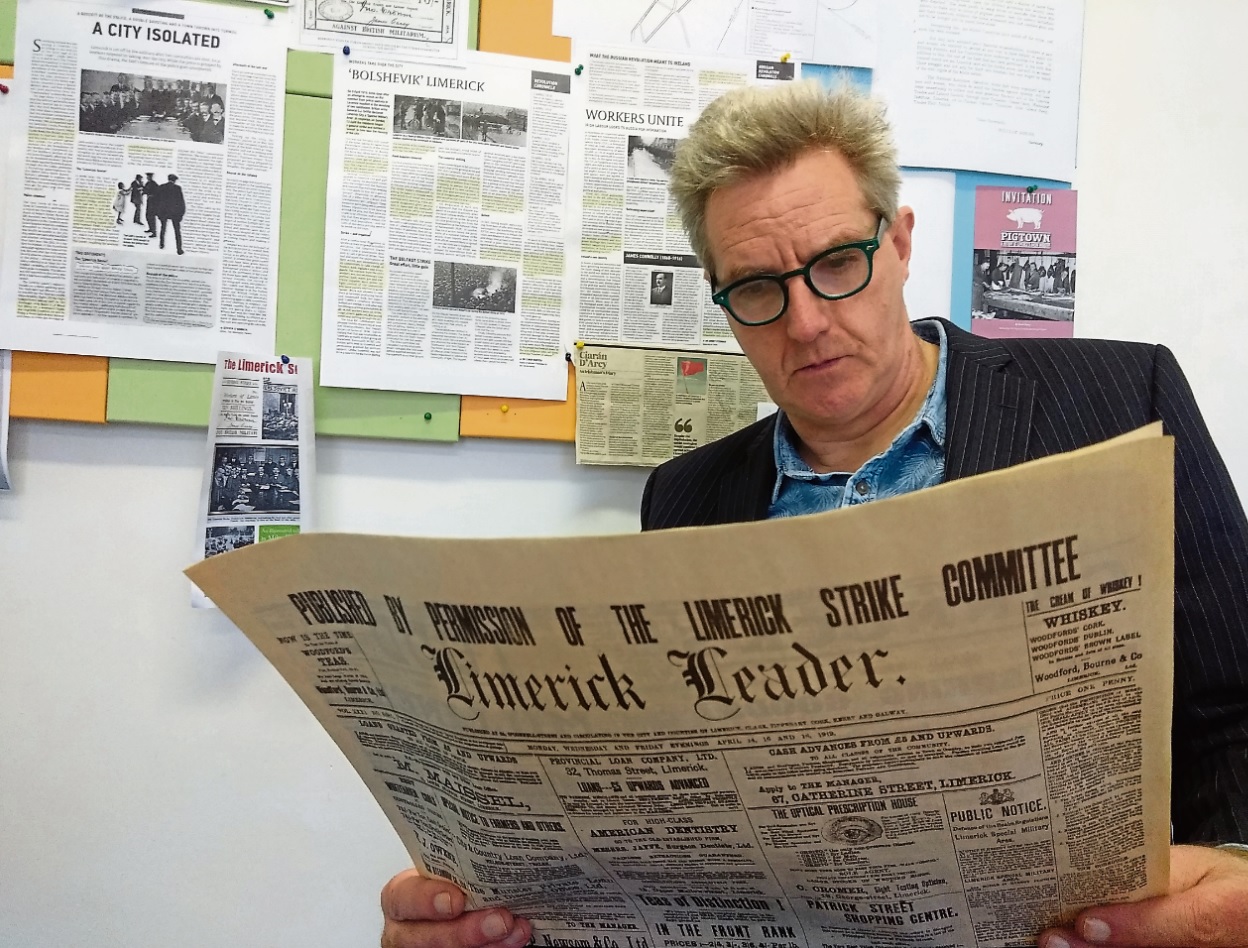 Bread Not Profits is inspired by those events and is being developed as part of Finn’s year long residency at the Belltable. He hopes to premiere it in 2019 - at Cleeve’s Factory, but admits “a lot of things have to happen between now and then, particularly getting the money for it”.

The Arts Council is the target to be the major funder - but you wonder also if there will be an institutional commemoration for such a seminal event in Limerick’s history.

“It was hugely significant, in the city, nationally and even internationally - it had consequences and was really significant worldwide. But a lot people in Limerick are only vaguely aware that something happened. I think it is because it isn’t really taught in schools, the same way as stuff like the 1916 Rising is.

“I have been aware of it for the longest time. Even before I started this year, I had probably read everything that had been written about it, and we did a short scene about it in Pigtown in 1999, so it is something I have always wanted to return to.”

The challenge, he says, was trying to find the drama, personal stories - and stories that reflected more than just an apparently male dominated event.

“On the surface at least, it seems a very male story, but the thing is that, of course, the female population was affected by it and obviously women had a lot to do with this, and trying to find their stories was the thing. And I think we have managed that.

“I am trying to dig a little deeper to find those personal stories. I started to look at individual domestic scenes, social scenes, scenes at work, where a small group of people are thrown together, perhaps with opposing views on the issues of the day. And that way you get to explore the issues, get out the story through exposition, which hopefully is not too clunky and doesn't sound like a lecture.”

Terry O’Donovan is on board as director, while David Blake is composing some original music - an exciting team. In the meantime, Finn will present a work in progress reading of the play in the Belltable on December 14. He says the play is in “good shape” as 2019’s premiere beckons.

“I think it is going to be really good,” he adds.

You wouldn’t doubt him.