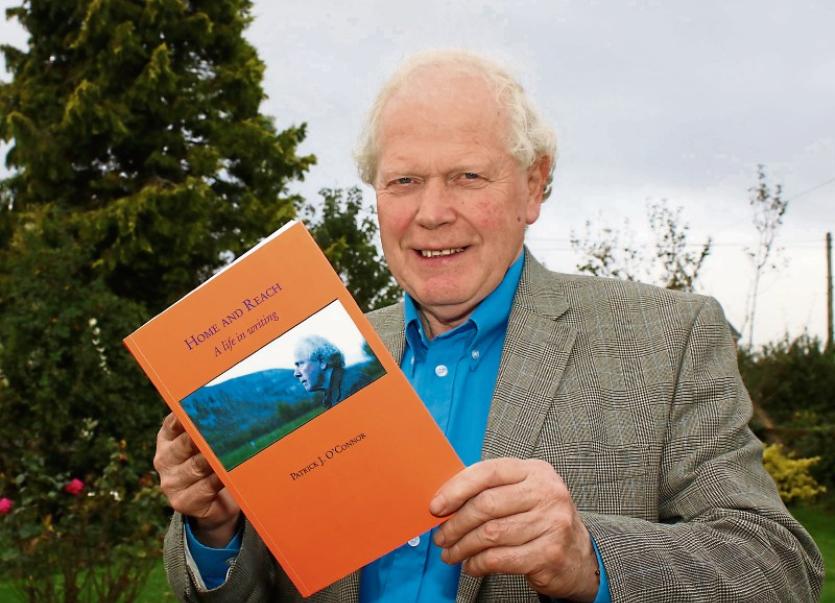 Dr Pat O’Connor’s book Home and Reach will be launched in the Red Door, The Square, Newcastle West this Sunday

IT is not a farewell to writing. But for the Limerick man who has written 20 titles spanning 30 years it is an ending of sorts.

He will, inevitably, take up the pen again but for now, Dr Pat O’Connor, retired academic, geographer, poet and author, is happy to launch the book which he sees as completing his  memoirs.

These began with ‘The New Houses’, continued with So Long to Coolanoran and now finishes with ‘Home and Reach’.

“I do like trilogies,” he remarks, almost surprising himself with the observation. “They have a beginning, a middle and an end. There is a certain roundedness to them.”

His astonishing output, over three decades, can be counted out in trilogies.

“Things have run in threes,” he agrees, “sometimes by design, sometimes perhaps not.”

There is his Rathkeale trilogy which includes one of his best known books, People make places: the story of the Irish Palatines. There is his Irish trio of books about Irish place names,  Irish fairs and markets and  Irish geography and identity. Now comes the last in his trio of memories. And, he says simply, it is timely. “I did want some kind of rounding out.”

Home and Reach is, in many ways, his most personal book yet, a looking back over his writing life  from which emerge the dominant themes that inspired him, as man, as geographer and as writer.

There is a counterpoint to this, a kind of stricture by which he behoves us to know the world we inhabit because by knowing our own small world  intimately, we can come to discern and to know the wider world.

Through book after book, whether history, geography, memoir or poetry, he has demonstrated his belief in these philosophies, which have led him into unexplored territory but always, linking the local with the international, the known with the newly discovered, and seeing the backwash of the wider world ruffle the waters of smaller ones.

A passionate explorer of worlds and words, his abiding theme is that people make places, one that shines through again in his new book.

But Pat is more than happy to acknowledge that people are also shaped by place, as he has  been. And there is a curious rightness in the fact that it was only when he returned to his native West Limerick with his wife Esther and family,  that his literary life began.

He settled in Coolanoran, Ardagh, uncannily near to the spot where, as a seven year old, he and his brother once found themselves lost and out of their comfort zone while out searching for bird nests. But Dad arrived on his bicycle to bar them home. A classic Pat O'Connor story of ‘setting out to get lost only to find yourself found’.

"I didn't want to be bound by academia," he says now, trying to recall what impelled him to his desk and the blank page.  It came, he believes, from a certain rugged individuality, something he feels he shared with fellow Newcastle West man and sometime neighbour in Assumpta Park, the poet Michael Hartnett. Hartnett also followed a far from linear path, Pat points out.

The writing began modestly, as he explains in the book, but quickly gathered pace. Within two years, his Exploring Limerick's Past had won the Irish Historical Research Prize and in 1989, he won it again for People make places; the story of the Irish Palatines.

Now, he describes his writing life as a journey.

"It was a real odyssey. It was very enjoyable and even the frustrations added colour and tonality to the experience,” he says.

There was too, he acknowledges, a lot of hard, unseen drudgery  associated with the writing: the scouring through documents, checking of facts. Three years of research went into his Atlas of Irish Place Names alone.

But he revelled in words and making them sing and along the way he also found a new voice for himself in poetry. In 2005, his geography and poetry came together in To Mete a Humanist Geography, a book of new and selected poems in which he paid homage to mentors and to the giants of the geography world. Their delight, conveyed to him through letters, remains a delight for him to this day.

The individualist in Pat also ensured that he  took control of the publishing side of things, under the imprint he established at the very beginning, Oireacht na Mumhan. This brought him right into the heart of the book trade, a world he came to enjoy, peopled by colourful and unusual characters and which we get a glimpse of in this book.

But Pat also believes he was lucky in his literary life. He was, he feels, also very fortunate in the influences on his life. "When the chance came up, I was there to meet it and I did meet it." And in the end, he says imply: “I went out and I did it.”

The book Home and Reach is a fitting summing up of three decades of creativity and endeavour. It is quintessentially Pat, a rare blend of people and places knitted into a wide sweep of accumulated knowledge and observation. At heart, it is a tender book written by a shy and intellecutal man who has laboured mightily in many fields and who retains the intellectual curiosity and vigour of his youth.

The book comes with a bonus in that the last section contains a number of new poems under the title “To cut a fresh swathe”. But mark this well. There will be another cut to come, whatever he may say now.

Seamus Smyth, former president of NUI Maynooth, will launch Home and Reach this Sunday in the Red Door, Newcastle West at 4pm. All are welcome.