A comedic tale of odd chemistry takes to the Belltable stage

Fishamble present Maz and Bricks, written by and starring Eva O’Connor and directed by Jim Culleton 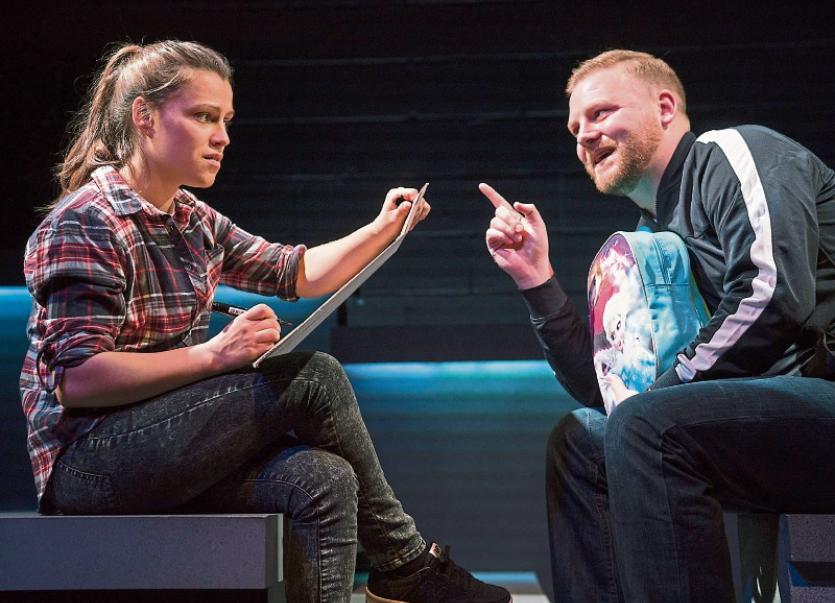 A NEW comedy that tells the story of an unlikely pair of divergent characters, who get caught up in the drama of an abortion protest, will take to the Belltable this week.

Maz & Bricks, written by and starring Eva O’Connor and directed by Jim Culleton, illustrates a day in the life of two young Dubliners; Maz — a woman attending a Repeal the 8th demonstration — and Bricks, a man going to meet the mother of his young daughter.

Maz & Bricks will take to the O’Connell Street stage for three nights, from Thursday, May 18, to Saturday, May 20, with tickets selling for €16.

The two enter the stage together in the setting of the Luas. Maz, who is busy drawing a placard for the demonstration, is being distracted by Bricks, who is speaking loudly on his phone.

“They end up having this really weird chat, where he is saying: ‘I am against abortion because I have a really young daughter.’ And she is like: ‘Look, loving your daughter and legalising abortion are separate issues. I am stressed today, can you leave me alone,’” Eva tells the Leader.

Despite differences, the two make a connection when Bricks later intervenes when Maz is about to get involved in a violent altercation at the demonstration.

“They are a real unlikely pair, and I am interested in the idea of people having this chemistry when it is really unexpected. They are actually way more similar than they think. They are basically broken people who find the truth in their encounter.”

Though this body of work has its political stance, Maz & Bricks is also character-driven. And while both have “dark histories”, the show is filled with humour.

“Bricks is hilarious. I never even thought he was that funny, until Stephen Jones played him, who is a really amazing actor. He literally gets a laugh every minute in the show. And I didn’t really set out for it to be that way.”

She said that one particular aspect of the show that she is proud of, is the rhyming monologues that reflect a stream of consciousness.

“That was tricky enough to write. I am really proud of that. I think this is my biggest writing achievement. I think it is worth seeing it, for the language.”

Eva’s previous show Overshadowed, which was performed at the Belltable last year, is now being commissioned for a television series by BBC Three.