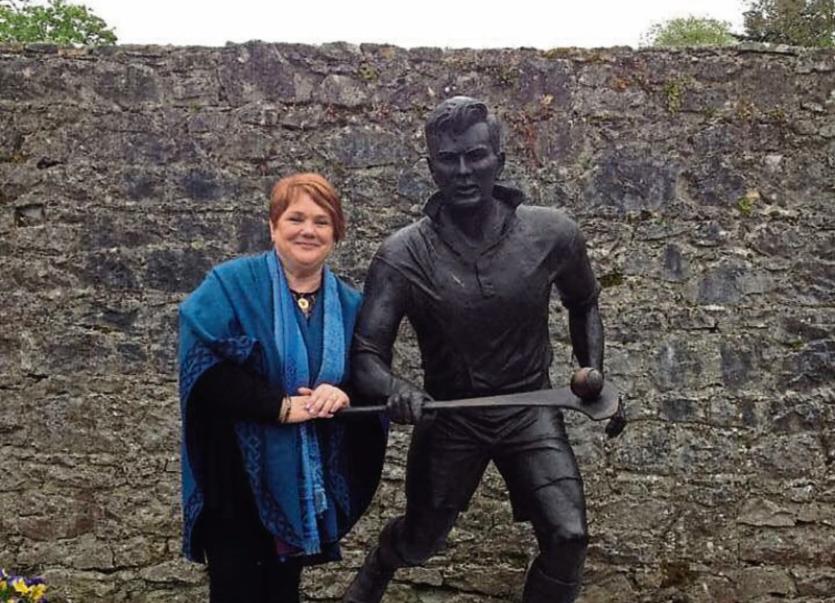 Ann Mulqueen at the Mick Mackey statue in Castleconnell

ANN Mulqueen, the highly-regarded traditional singer, has long been the pride of her native Castleconnell.

With a long and glowing career behind her, Ann continues to entertain and to promote the singing of Irish songs.

Ann now lives in the Gaeltacht of Ring, Co. Waterford, with her husband, Tomás Ó Céilleachair.

Through the years, the Limerick Leader has reported on Ann’s achievements and published a lengthy article on the happy occasion of her “celebrity” wedding to Tomás in Castleconnell in 1969.

The Mulqueens of Woodpark are a talented bunch, with singers, dancers, musicians, poets and even painters at every turn. Ann could not but be inspired growing up in such a musical home with father, John Joe, mother, Nancy, and eight siblings.

She first gained national recognition when she won the All-Ireland Fleadh for ballad singing in Thurles in 1959, aged just 14 years. No less a person than Séamus Ennis was the distinguished judge.

Ann went on to repeat her win in 1960 and again in 1961. Since then she has released three albums, completed two tours of Europe, three tours of America, toured Ireland with the Gallowglass Céilí Band, and toured with both the Dubliners and the Johnstons at various times during the sixties.

She sang for President Ronald Reagan when he visited Ballyporeen in 1984 and has been a regular on radio and television through the decades.

Ann was a guest lecturer at the University of Wisconsin for the Milwaukee Irish Festival in 2002.

While all this was going on, Ann and Tomás reared five children, all talented in their own right and who have all now flown the nest: Fiachra, Sorcha, Odí, Neasa and Óige. Óige, a secondary teacher, has found his way back to his Limerick roots, teaching History, Irish and Drama at Gaelcholáiste Luimnigh.

Ann has recorded a programme, ‘Sé mo Laoch’, for TG4 which will be screened on Sunday night, March 26 at 9.30 pm. The programme documents Ann’s life and career, from its beginnings in Castleconnell up to the present day in Ring. The show has some lovely scenery of Castleconnell with interviews with people who followed Ann’s singing career, including Donal Ó hEidhin from Newgarden and Ned Fitzgerald from the lane where Ann was born. She will not be forgetting her old friend and hero, the great Mick Mackey, on the special night.

Ann’s family will also feature, including her granddaughter and her two sisters, Eileen and Sadie, who will join Ann in a song or two.

If you miss out on Sunday night, the show will be repeated on Wednesday night, March 29, at 7.30 p.m.