Filmmaker Gerard Barrett making it to the big time 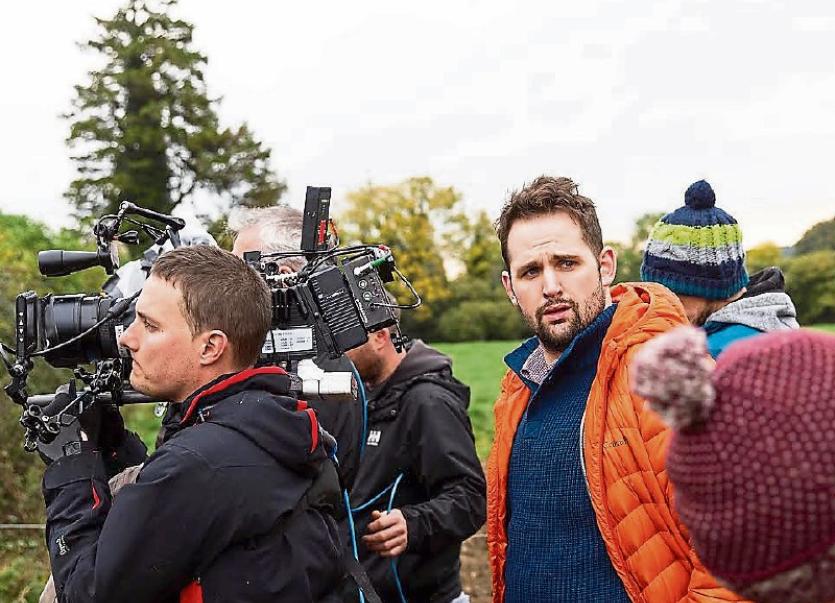 Gerard Barrett, pictured during the filming of Smalltown, which he directed and wrote and is out now on DVD

ONCE upon a time, a very short time ago, a young Kerryman with Limerick blood in his veins set out to make three films before he reached the age of thirty.

Still only 27, director and screenwriter Gerard Barrett from Knockanure, is well on his way to surpassing his dream. He now has two feature films to his credit - the latest of which, called Brain on Fire, will open in the US next year. But television audiences know him best for Glassland and the recent TV3 series Smalltown.

Gerard, whose parents, are from Athea, began his climb to acclaim a little over five years ago with a gala opening of his first feature film Pilgrim Hill in Ballybunion. That film had its Limerick premiere in Athea, where many of the scenes were shot and from where some of the cast had come.

It went on to be screened in cinemas all around Ireland and won rave reviews as well as a raft of awards for the man from Knockanure, just over the Limerick/Kerry border.

“I think we all know people like Jimmy,” Gerard explained to the Limerick Leader at that time of the central character in Pilgrim Hill.

“Many of us have uncles and aunts like Jimmy or even close neighbours. People like Jimmy never saw or benefited from the Celtic Tiger nor were they the cause of the country going bang, but they have to deal with the consequences like all of us.

"These are people who exist in the background of society and it was important for me to tell their story. Sometimes their lives were taken out of their own hands and they just had to get on with it. You have to admire that most of them did just that”.

“I wanted to highlight the loneliness that bachelor farmers go through in rural Ireland,” Gerard went on. “Their lives are so tough, incredibly tough and I wanted to shine some light on it.”

Shining the light on the issues in Irish society has continued to be  at the heart of Gerard’s subsequent work.

Glassland, set in Dublin, deals with another dark side of Irish life and tells the story of a young taxi driver who gets tangled up in the world of human trafficking while trying to pay for his alcoholic mother’s rehab treatment in a private clinic.

And earlier this year,the television drama, Smalltown, starring Charlie Kelly and Pat Shortt, brought Gerard’s work into every home in the country.

The series also deals movingly with the topic of cancer, when the main character Conor comes home to spend time with his seriously ill mother.

“It’s a family dealing with a crisis. Cancer, I think, is ripping the country apart, and I wanted to talk about that, bring it to the table,” Gerard said. “Everyone uses the ‘C’ word and they don’t want to use the full word. I wanted to bring that conversation to a primetime audience, to discuss that.

"On top of that it’s about Pat Shortt’s character and Charlie’s character, and where both of them belong, where their futures lie,” he added. "You’ve a young man who doesn’t know if he belongs here or abroad, and you have a man, a father, who doesn’t know where he belongs. It’s very much about uncertainty, and ultimately, family.”

For Pat Shortt, who played Conor’s father Tom in the series, it was a chance to take on a very meaty role and he was attracted to the project by Barrett himself and his style of filmmaking.

“There were great scenes in the script – the conversations were real and the way it is all driven. Once I read the script I loved it, but then I also had seen Gerard’s earlier work and had known what he was capable of.”

“He makes the very ordinary, extraordinary, that is what he does really, really well.”

The release of the series on DVD just last week will ensure that anybody who missed that experience first time round will have the chance to rectify that.

Soon, however, film audiences will get to see Gerard's first US film, when Brain on Fire goes on worldwide release early next year.

The film, produced by Charlize Theron and starring Chloe Grace Moretz in the lead role, is based on the New York Times bestselling book by Susannah Cahalan. It tells the true story of a young journalist who develops a mystery brain illness which has huge effects on her behaviour and life.

“It was something different for me,” Gerard said of the experience. “I wanted to go to America and make a film there , work with different people. It was fantastic, a great opportunity to tell an important story.”

The film got a standing ovation when screened a few months ago at the Toronto Film Festival but some of the early film reviews have been less than enthusiastic.

“I can’t talk about that stuff. That is a personal opinion,” Gerard, now back in Ireland, said. “For me, telling the story honestly was the most important thing.”

Susannah’s story in book form has already sold 12million copies and Gerard is confident enough in his own work to believe the film will have an appeal for them and for millions more.

Having full control over a project is also important, it would seem. In all his work to date, Gerard has been both screenwriter and director and it is unlikely, he said, that he would ever direct somebody else’s work.

“I have to be passionate to do it,” he explained. “I take responsibility, there is no one else to blame.”

His approach is disarmingly direct.

“I don’t go out to reinvent the wheel but to tell a story.”

And telling stories about Irish life, and in particular about life in rural Ireland, will continue to be a strong thread at the heart of his work.

Unlike many directors, who tend to work closely some of the same technical personnel all the time, Gerard doesn’t have a team. “I am a lone wolf in that sense. I came from outside the system, I don’t have a team. “

“You work with whom you want, who suits the project,” he explained. And that goes, across the board, from technical to casting.

He acknowledged, however, that getting backing for future projects has gotten easier because of his success to date.

But he elaborated: “I don’t really worry about money.” The money tends to find its way to the project, he believes.

Now back in Ireland, he is writing and figuring out what the next project will be.

“There is no real plan. At the moment, it is just about working and writing and making the next thing and moving on.”

One of the “two or three things” he is currently working on is a screenplay based on a novel published last year. But no more than that will he give away.

“That might or might not be the next thing,” he said. It’s a case of “whatever pops first”.

“I made a plan,” he said, referring to his ambition to make three films before he was 30. “I I achieved that. Now it is about working, continuing to work and to write.”

And occasionally, to helping out with the silage at his parents’ farm in Knockanure.