Bright future for jazz in Limerick after an 'exceptional festival' 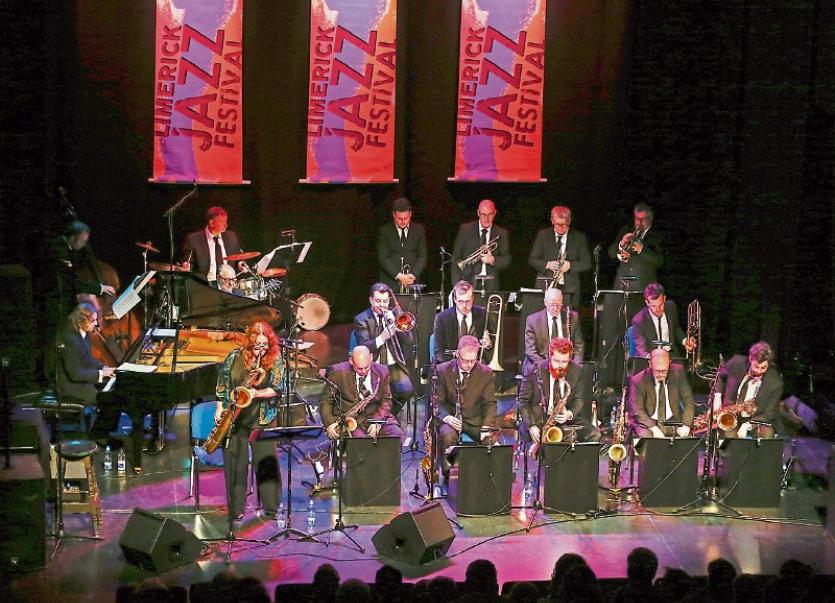 COOL CATS from across Limerick and the Mid-West and from hundreds of miles afar witnessed one of the grooviest weekends of jazz in the city last weekend.

The Limerick Jazz Festival, now in its fifth year, underlined the city’s undoubted allure for national and international acts, marking a monumental 35th year of jazz performances across the city and county.

The swing festivities kicked-off in lavish fashion last Friday evening, with an ebullient concert by the Dublin City Jazz Orchestra, whose 17-piece band relived the magnum opuses of Stan Kenton and Gerry Mulligan.

Even for Winstone — who became a jazz vocalist revolutionary for her 1972 LP Edge of Time — the Belltable performance proved to be an “exciting challenge". Speaking to the Limerick Leader at an intimate jazz workshop in the Hunt Museum, she explained that her flight to Ireland had been delayed by a day, causing her to miss a rehearsal with the orchestra on Thursday evening.

This left the expert with under two hours on Friday evening to re-familiarise herself with the Kenton setlist and Brendan Doyle’s and Ciaran Wilde’s eclectic arrangements.

Jazz pianist and writer, Brian Priestley, who has been attending the festival since its inception, said Winstone’s performance had “the mark of a great musician”. He said he had been watching Norma’s career from the beginning.

“Not only are you flexible enough to perform well when you are in a situation like that, but that you are ready to go for it and put something of yourself into it. And if there were any slip-ups, which I didn’t notice, the audience won’t notice. And, of course, Norma is so experienced.”

Another feature of this festival — something not so prevalent in other popular occasions, such as the Cork Jazz Festival — was the educational aspect for children and young adults.

Also seeing these programmes as important was jazz guitarist virtuoso David O’Rourke, who helped a large crowd of children at Music Generation on Saturday afternoon. Later on Saturday, O’Rourke led a small jazz workshop at the Hunt. This proved to be a serendipitous occasion for those who attended, as an impromptu performance kicked off featuring Winstone, Claire Daly, Paul Dunlea on trombone, John Daly on drums and Peter Hanagan plucking the double bass.

Speaking days after the festival, organiser John Daly said that “it was a fantastic weekend, and it was the most exceptional one to date. It does take five years to build it up to this, and we are absolutely delighted”.

One of the highlights of the festival was Canary Islands’ seven-piece Latin jazz-fusion band, Atchere on Saturday night. Performing a series of Latino, Bossa Nova and jazz fusion pieces, Atchere also provided a platform for both relaxing and riveting listening with Milton Nascimento-esque originals.

Saxophonist Daly and guitarist O’Rourke, when speaking to the Leader, emphasised the importance of funding for projects like the Limerick Jazz Festival. Limerick Jazz Society received €10,000 in Arts Council funding this year.