Donie's first solo album is a gem and worth the wait 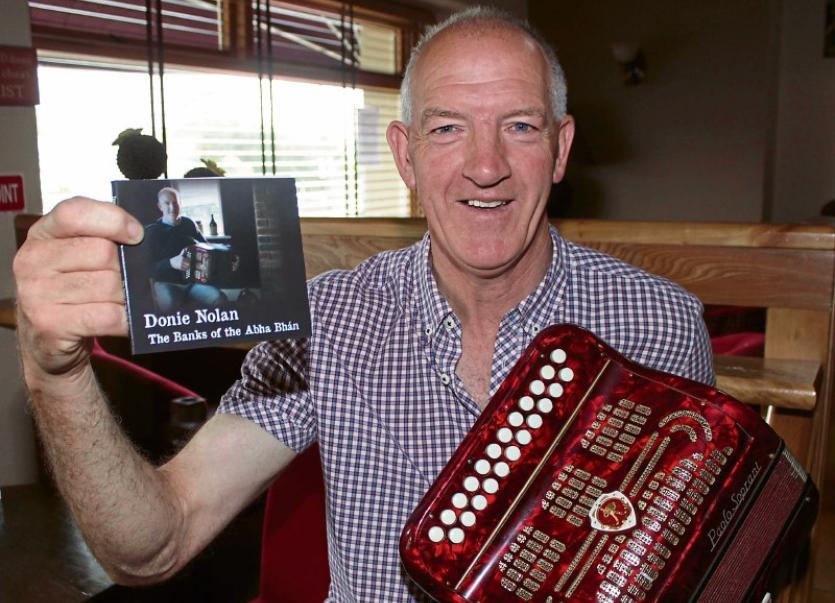 Donie Nolan, accordion player and singer, pictured following the launch of his long awaited solo album The Banks of the Abha Bhán

IT was, by any reckoning, a dream launch. Over 250 people gathered in the Devon Inn Hotel last Thursday for the long-awaited solo album from West Limerick accordion player Donie Nolan.

And on Sunday, at the Willie Clancy Week in Miltown Malbay, Donie’s CD The Banks of the Abha Bhán got its second baptism at this great annual gathering of musicians.

Having featured on at least half a dozen CDs over the past thirty years, Donie is no stranger to recordings but the surprise for many is that this is his first solo album.

It is, however, an album that has been worth the wait, a CD full of lovely choices and surprises that demonstrates the breadth and beauty of Donie’s style and his instinctive musicianship.

And in the sleeve notes, you get a lovely glimpse of the range of the musical journey this man has made since he first picked up an accordion.

Donie’s first brush with music was as a pupil in Kilcolman NS where teacher Paddy Murphy got a school band going. “I remember the first tune I played was with a mouth organ above in the old hall in Knockaderry,” he recalled this week.

“I have been playing accordion since I was eleven or twelve,” he continued. “I wasn’t ever taught. I never learnt by note. I always played by ear.”

He started out, he explained, with the old C sharp and D style or what he called the “old press and draw style”. But he was later attracted to the newer style advanced by Paddy O’Brien from Tipperary, using both rows in what came to be known as B and C playing. “It gives you a broader range,” Donie explained. “But I would go back to the older style if I were playing on my own.”

A car, acquired when he was about 18, opened up a new world of music for Donie as he travelled around to Kerry, Clare, Cork and around the country and became familiar with other musicians, other tunes and other styles of playing. Fiddle players such as Connie O’Connell of Cill na Martra in Cork or Denis McMahon in Castleisland left their mark and he makes references to them and to other and local influences on his sleeve notes. “I didn’t listen to too many accordeon players at all,” he said. But he has always enjoyed sitting in on sessions, picking up new tunes and passing on the hundreds he has in his own head

He describes his style as “first and foremost West Limerick” but adds that he would have Clare and Kerry influences too.

“Carrigkerry was always the hotbed of music in West Limerick,” Donie continued. “Carrigkerry has something different again in the timing of the tunes.”

Over the years, Donie has become synonymous with the Carrigkerry WrenBoys and with the Taylors Cross Ceili Band but he has also built a reputation as a singer and this is reflected in the album where he sings on three of the 16 tracks.

Another very vivid and unique element in Donie’s album is that it features dancers, resurrecting shades of Dinjo and dancing on radio. Their dance steps can clearly be heard during several of the dance sets which were recorded live.

The Banks of the Abha Bhán, takes its title from the White River which rises in Donie’s part of the world and Donie is accompanied on the album by John Blake and Brian Mooney.

It costs €15 and is available in local shops in Carrigkerry, Athea, Glin, Ballyhahill, Lyons in Abbyfeale and O’Connors, Newcastle West.