A new hope for planned cinema and filmmaking hub in Limerick 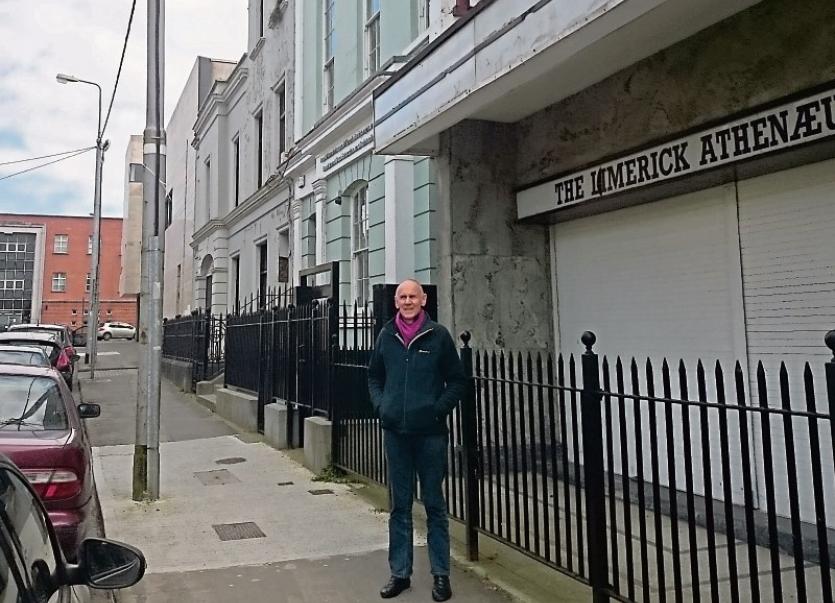 Dave Burns outside of the planned home of the Limerick Royal

On Cecil Street in the Limerick City Centre lies a disused building bearing the curious name of The Limerick Athenaeum. Above its entrance is pop-out signage reading “Royal”. These names are artifacts of the location’s history in Limerick as a cinema and as an institution of artistic entertainment and education, and plans to revive this role within the city have been in the running over the last five years.

The Limerick Royal is a planned four-screen theatre and filmmaking hub intended to occupy the premises of the former Royal Theatre and Limerick Athenaeum Hall. The site of the building planned to house the Limerick Royal has served a long and varied history within the city. It has been home to a school of art, a lecture hall, a theatre, a concert hall, and as Limerick’s first public library. It was home to two different cinemas, under the names Athenaeum Permanent Picturedome and the Limerick Royal Cinema, where a young Richard Harris used to sneak into to watch films. The Royal was one of two cinemas in the city centre’s history, the other being the Savoy Cinema. Only the Belltable has screened any films in the city centre since both cinemas closed down.

Their goal was to establish a cinema in the city that would also serve as a digital filmmaking hub, providing the facilities and equipment for rent to aspiring filmmakers. The Royal would also house classrooms which the LCETB, who owns the Limerick Royal building, could rent to educate and train them. They spent €400k on a feasibility study thanks to funding from organisations like Shannon Development, Limerick Regeneration and the City Council, which found the project could become self-sustaining and successful. A planning application was approved by the City Council in 2012 and a detailed design for the Royal was finished by July of the next year. The team behind the project has since grown to include Limerick Film Festival founder Simon McGuire and Sheila Deegan, Arts Officer for the Limerick City & County Council.

Dave Burns spoke to me about why the Limerick Royal has not yet started construction, after having planned for a launch in September 2014 back in 2012. “Essentially we are waiting for some local or national government to put some money on the table, so we’ve looked out for some other sources of funding, such as corporate or social philanthropy.” The project has been actively mentioned as a feature of Limerick’s cultural growth plans over the past few years, including being part of a proposal to develop ‘The Georgian District – Digital Quarter’ by Innovate Limerick.

It has received the support of many members of the Council and Minister for Education Jan O’Sullivan as something that would fill a cultural hole in the city centre. But as arts funding has dried up nationwide, the project simply stalled at the onset. “Everyone likes the idea of it, but it’s hard to get a signature, a commitment to funding,” Dave says.

One of the goals of the cinema is to provide a home for films that do not make it to the Odeon and Omniplex cinemas.

He complains that Limerick’s film screening options are limited to high-profile American films and art-house films, and says the Limerick Royal would be home to mainstream films that have passed by Limerick in the past.

Although the planning and design for the Limerick Royal has finished for when funding becomes available, Dave does not expect it to come in the immediate future.

He also says that a project manager is needed to help administer the development of the project; Dave feels on his part that he has invested enough personal time into its planning.

However, recent developments may have brightened the outlook for the project. The Council has reported plans to buy the former biblical centre on Cecil Street, nearby the Limerick Royal, and intends to renovate it into a ‘digital media hub’, providing training in skills relating to software and programming, film, media and photography and has set aside €2m for the project.

For more information about the Limerick Royal, visit http://limerickroyal.ie/