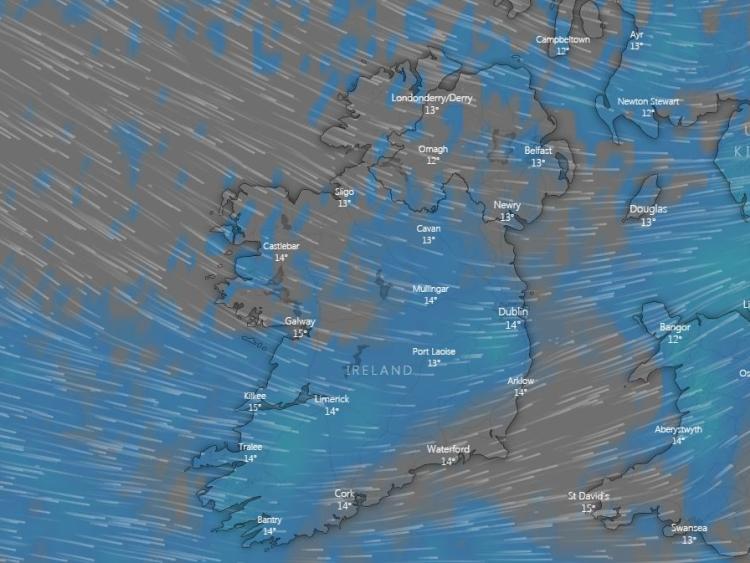 You may still need an umbrella this week | Picture: Windy.com

WHILE the forecast predicts a much brighter week than last week's seemingly endless torrential downpours, you will still need to have the brolly by your side with intermittent showers expected in the coming days.

Though there was a bleak start to the day in Limerick, Monday is expected to be mainly cloudy with maximum temperatures reaching 17 degrees at around 4pm.

It is expected to be drizzly and cloudy in most parts of the country, with similar mild temperatures nationwide.

There will be intermittent spells of rain this Tuesday, intensifying at 4pm and 8pm in Limerick. It will be mainly dry in the east and south of Ireland, and dull in the west and north with mild temperatures.

In Limerick on Wednesday, there will be a wet start but it will remain partially sunny and cloudy after 3pm with maximum temperatures hitting 15 degrees.

The national outlook is that it will be bright and blustery, with some heavy showers.

According to Met Eireann, Thursday will be the day to breathe a sigh of relief, as it will be mainly cloudy for the day, with similar conditions nationally.

You may not wake with the Friday feeling in Limerick, as it will be a fairly dull start with showers hitting the region until 10am. But this will clear in the afternoon.

All 'n' all, it's time to ditch the tees and shorts and, perhaps, have a warm jacket at the ready from now on...