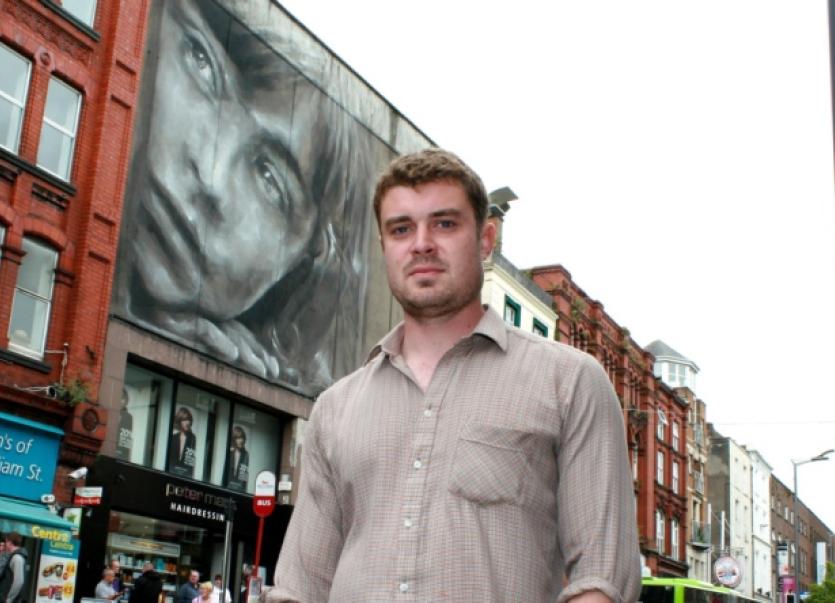 ON a late afternoon one day in 1975, photographer Gerry Andrews snapped a series of portraits in the Milk Market.

ON a late afternoon one day in 1975, photographer Gerry Andrews snapped a series of portraits in the Milk Market.

It was, he remembers, a “typical deary, dull, wet Limerick day”. He happened to capture a young girl, peering out of a car, waiting for her father to finish up work on his stall.

Almost 40 years later, an Australian artist has - using Gerry’s photograph as inspiration - brought the girl to life on an otherwise nondescript slab of concrete, high above the shops on a bustling William Street.

Guido van Helten, a world renowned street artist, completed the mural last weekend, working as part of the ongoing and innovative Draw Out - Urban Exhibitionists project that is using Limerick’s walls and facades as a canvas.

The girl’s identity remains a mystery - and it is in that mystery that van Helten chose his subject, seeking to root his urban street artwork in a “local context”.

“The mystery and the emotion in the eyes appealed to me,” said Guido, standing looking at the completed work above Peter Marks.

“She is looking back towards something, and I think it is interesting to place it up here and not know who it is.

“I work to a formula of contacting local people or organisations - or photographers - to give the work, my murals, a bit of local context.

“This particular photograph I thought was interesting out of Gerry’s collection, because, out of all the ones he has, this is one of a person that he didn’t engage with, he didn’t know who it was. It is a person in a car driving away that he said he took at the end of the day, and it was a bit of a lucky photograph.”

Gerry, a former Limerick Leader works manager who released the stunning collection of images in Shaped by History – Limerick in the 1970s, an exhibition and accompanying book, said the identity of the girl remains a mystery.

“I don’t know who it was. It was one of a series of photographs that I had taken in the Milk Market during that period,” he explains.

“What struck me, I suppose, was just the tranquillity in her face, that she was just sitting there waiting for her father to get a move on. It was late in the day, the afternoon, I remember that and that it was a particularly dark day. It was a hard photograph to take because there was very little light.”

Gerry, whose work will go on display at the National Photographic Archive in Dublin in August, opened by Bill Whelan and backed by City of Culture, said he has “absolutely no doubt” that the girl is from the Limerick area and hopes that Guido’s work will jog some memory of her.

“It would be great if it was possible to identify who she was,” he said. “Guido’s is an unique talent, it is an incredible skill to be able to do such a large painting and get the perspective and proportions all correct - it is an amazing skill.

“I spent some time with him over a few days and I think it looks great. I think the large urban paintings that are going up around the city are fantastic. They are brightening up the city, and where there was a drab wall, now there is a stunning portrait of an unknown girl.”

Guido for his part, who worked with aerosols to layer the work onto the concrete, said his experience in Limerick had been “a very positive” one.

“You can see more of a community reaction here because people perhaps haven’t seen much of this and now all this work is going up around the city, thanks to the project, and everyone seems to be loving it.”