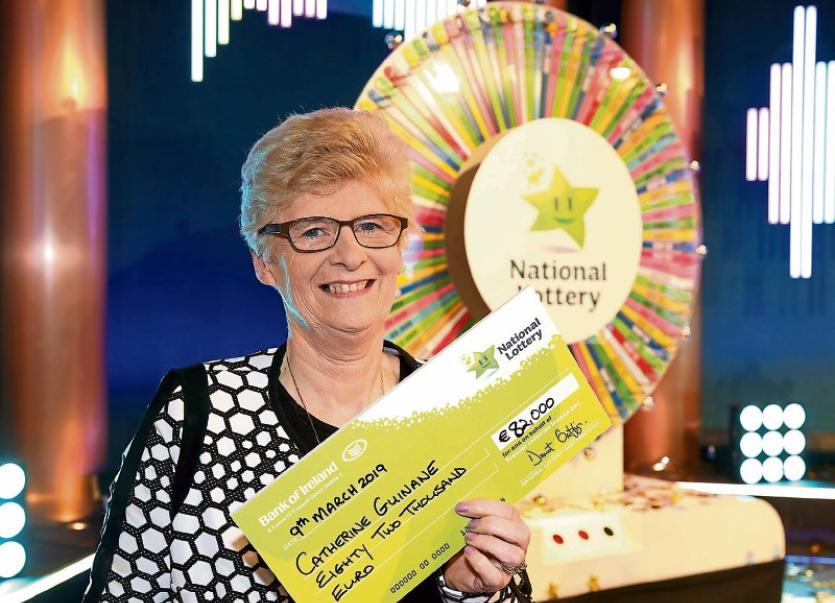 A LIMERICK woman got to spin the coveted Winning Streak wheel and win a whopping €82,000 on her third appearance on a National Lottery TV game show on Saturday night.

Catherine Guinane, from Ballingary, made her hat trick of National Lottery game show appearances just eight weeks after losing her husband, Patrick ‘Pa’ Guinane, after a six month illness. The couple were married for 49 years when he passed away in January.

Catherine won £28,000 (Irish punts) when she first appeared on Winning Streak on January 7, 1995, which was then presented by Mike Murphy. Six years late the lucky woman was a contestant on Fame and Fortune, hosted by Marty Whelan, winning £18,000.

Catherine was reunited with Marty Whelan 18 years later last Saturday and got to spin the Winning Streak wheel! She won €60,000 on the spin brining her total winnings to €82,000.

Catherine said her Winning Streak luck gave the whole family a ‘little lift’ after a really tough start to the year with the death of her husband.  Catherine and Pa’s three children, Jean, Ciaran and John, and five grandchildren, Jamie, Ella, Sam, Leah and Mark, cheered her on from the studio audience. They were joined by a number of other family members including Catherine’s brothers, Pat and John.

Catherine has worked in the head office of O’Sullivan Ironworks in Rathkeale, Limerick, for 29 years and in her rare spare time supports GAA, rarely missing a Limerick game.

She even braved the elements to watch the hurling team play against Clare in the snow in Ennis the day after her name was drawn out.

Cather was in Croke Park last August to see Limerick win the All-Ireland final and said that it was a day she will never forget, in a difficult year.

She is also an avid gardener and says she will use some of her winnings to do landscaping work in her own garden.

The National Lottery game show, co-presented by Marty Whelan and Sinead Kennedy, features some perennial favourite games as well as some brand new games including Play or Pay, Roll for Riches, WinFall and Electric Dream – where one player will win an electric car worth €25,000.