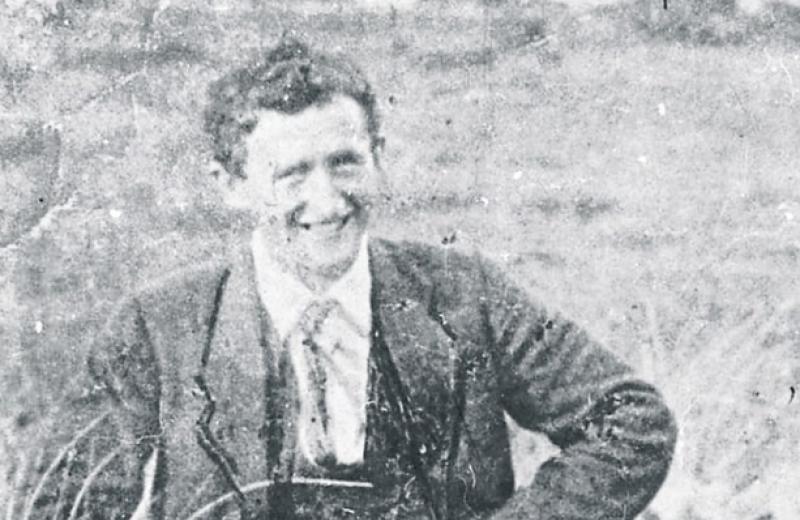 WEST LIMERICK'S Old IRA Memorial committee recently brought out a 44-page booklet to mark the centenary of the death of Brigadier Commandant Seán Finn from Rathkeale.

Seán was shot by Crown Forces in Ballyroe on March 30, 1921, but the pandemic caused a delay in its launch.

Chairperson Tim Mulcahy kindly sent me on a copy which contains additional information and rare photos from family members and other historians.

Also remembered in the book are the people whose names are included on the West Limerick Old IRA Memorial in Newcastle West situated opposite the Catholic Church.

In his address Tim wrote: "After 800 years of British occupation and countless heartbreaking reverses, it fell to Seán Finn and his IRA comrades in the War of Independence, through their courage and self-sacrifice to bring about the freedom we enjoy today. I trust that this booklet will go some way towards perpetuating the memory of a true patriot who had so much to give to his community and his country, and who died long before his time."

William Murphy historian and lecturer in History writes about Ireland 1921, which had become a violent place by the spring of that year.

On the day that Seán Finn died five others around the country lost their lives during that 24 hours. He gives an account of each and continues the story up to 11th July when a kind of peace broke out in Ireland for at least a while.

Cliona Murphy a grand niece of Seán Finn's introduces the reader to his family members and an insight into his life growing up.

She mentions Seán was known for his bravery and ability to lead others, which in a short time, led him to be appointed Brigadier Commandant of the five West Limerick Battalions.

He played an important role in the IRA operations in Limerick and surrounding counties during the Black and Tan War.

John Hayes' grandnephew writes: "Seán grew up in a close-knit highly respected family. He grew into a tall handsome, highly intelligent, widely read young man, renowned for his piety and athletic ability. He was a keen member of the Gaelic League and was captain of the local football team and played with the hurlers too."

John also outlines the Finn family connection with the Hayes family, Fr Michael who stood up to General Maxwell and Dr Richard who was appointed the first National Film Censor.

Tom Toomey, over six pages in an article ‘Seán Finn-an understated hero’ outlines Sean's involvement with events that took place up to his death.

He concludes by writing: "The loss of Sean Finn was an enormous blow to the IRA not alone in West Limerick but to the IRA in the County generally and the organisation as a whole. He was known to all the leading members of the organisation in Munster, men such as Liam Lynch, Tomas Malone. Michael Brennan and Donnchadha O'Hannigan had implicit trust in the young man from Rathkeale. To have risen to such great heights at so young an age was testament to his courage and ability."

Tim includes an article titled The Unsung Heroines, which pays tribute to the women and girls who played a vital but understated role in the war of independence.

He concludes with the following: A hundred years ago, much of West Limerick was criss-crossed by mass paths and were not used often, just by people going to mass. In many places they served as short cuts between towns and villages.

These pathways were off the beaten track and were not under the radar of the military, but they provided an ideal conduit for the transportation of messages between the different sections of the IRA.

Many of those who carried the dispatches were young girls in their teens who were less likely to arouse the suspicion of the enemy. They were however brave and committed. They knew the routes and they had a lightness of foot. They too were the unsung heroes of the War of Independence.

Tim also writes about Ballyroe, the site of Sean's death which was immediately marked and protected, and the people came and built a cairn of stones where their leader had fallen.

On the 50th anniversary of his death a wooden cross and plaque was erected on the site. Over the years the cross fell into disrepair and a committee was formed to erect a permanent memorial to Seán Finn.

A granite cross was erected at the site and a protective wall was built around the memorial by local volunteers. On Sunday April 2, 2000, the memorial was rededicated by the then Cathaoirleach of Limerick County Council Cllr Michael Kelly.

Tim ends by writing: "It is a reminder of how so often unplanned and sad events can become a part of history and folklore, for a community and define the spirit of the people who live there. The memorial will stand there for generations to come on a high sloping field, as a testimony to the idealism and courage of a young man who was prepared to make the supreme sacrifice in the cause in which he believed, and also to the commitment of the people of West Limerick to ensure that he will always be remembered."

John Hayes Rathkeale composed a eight-verse poem about the place where Seán died called Ballyroe. I include verse five:

Full well he fought for Erin's right
The bravest of the brave
And battled with the tyrant's might
His comrades dear to save
And in that tight and heroic fight
He gave back blow for blow
Till his young heart's blood rushed in a flood
In the sod at Ballyroe.

A copy of a letter from Sean Finn to his mother courtesy of Terence Mc Sweeney of Ballyhahill is reproduced. Rathkeale 1919 quote from Dan Breen's handwritten letter is included.

Tim Mulcahy writes about the GAA club in Rathkeale which was named the Seán Finn Park after their former player who gave his life in the cause of Irish Freedom. The Foreword is by Cllr Michael Collins.

On Friday, October 22, Tom Toomey gave a lecture on the life and times of Seán Finn at Rathkeale House Hotel. It is a very interesting book and well done to the committee for publishing it to mark his part in the fight for Irish freedom over one hundred years ago.

The Seán Finn booklet is available for sale in local newsagents for €5.